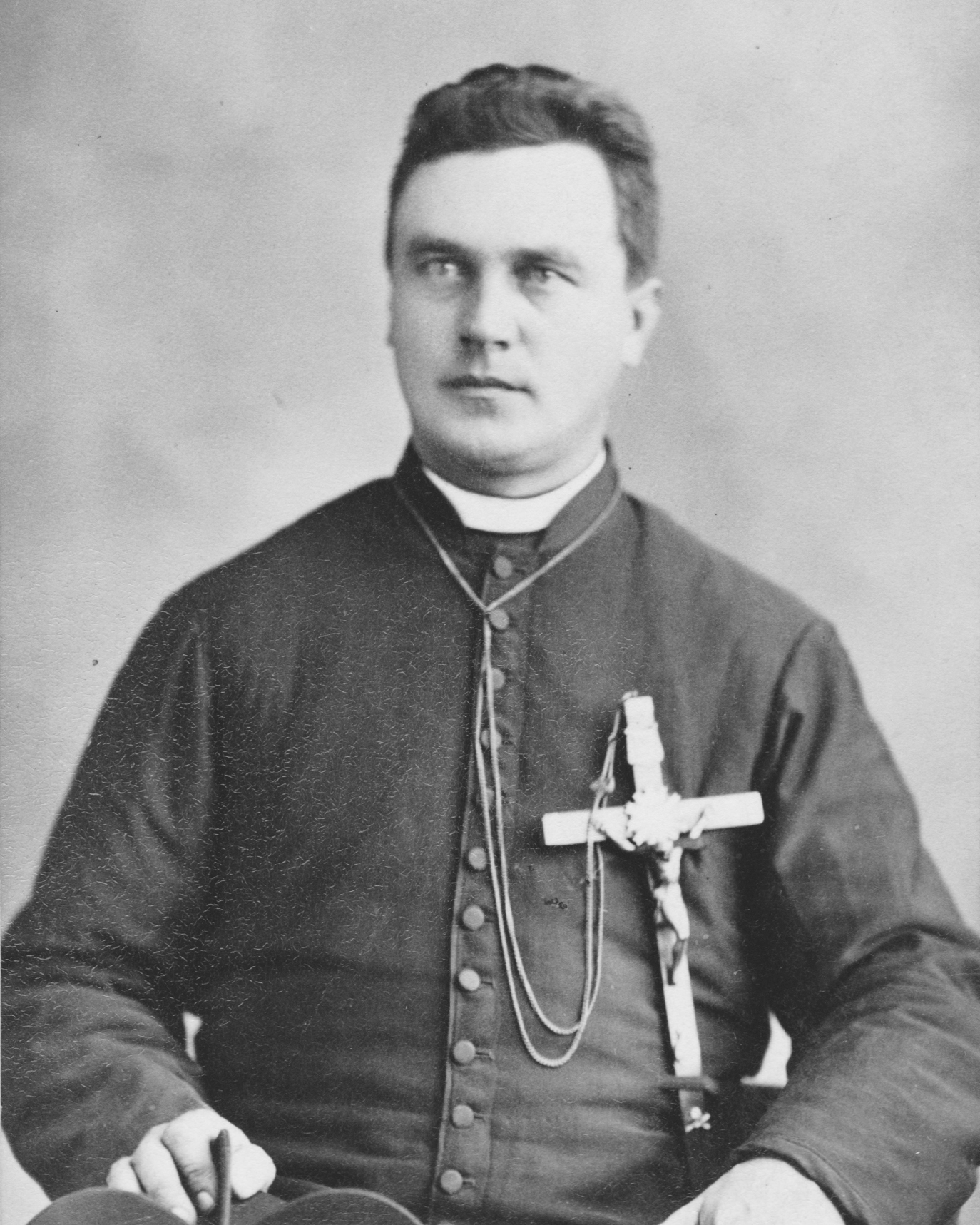 Fr. Florian Hahn, C.PP.S., was born in Germany in 1850. Not long after his birth, his family emigrated to the newly developing region of western Ohio. Hahn entered the Missionaries of the Precious Blood in Carthagena, Ohio, and was ordained a priest for the Congregation in 1882.

Six years after ordination, he was sent to the newly-built Indian School at Rensselaer, Ind. The school was established by St. Mother Katherine Drexel in 1888, and Hahn was sent to supervise the school by Fr. Henry Drees, C.PP.S., the American provincial director at the time. Fr. Drees must have realized that Fr. Hahn was very committed to the Indian cause even then.

Drexel opened another school in Banning, Calif., and Hahn was sent there in 1890. The solemn dedication of the school took place on January 1, 1891.

Fr. Hahn wasted no time preparing his students for the sacraments, and in May 1891, 38 youngsters received their First Communion. Fr. Hahn was tireless in his work for the school and very devoted to his Indian charges, who came to love him very much. Within ten years, he had a separate chapel building erected on the school property, working on the project along with Indian men. In 1895, he began the publication of a school newspaper, The Indian Mission. As a young man he had been a printer, a trade which certainly prepared him for this venture.

In 1901, Fr. Hahn’s superiors requested that he return to Ohio. This was a time of soul searching for the priest, now 51. He had come to love the students of the Indian school and his pastoral ministry in the surrounding area parishes. He knew that his presence was important to the continuing growth of the school, and his return to Ohio would leave the school and surrounding area bereft of ministry. After prayer and consultation with other priests, the sisters, and the bishop, Hahn chose to leave the Missionaries of the Precious Blood to continue to serve his new family in Banning.

In February 1901, Fr. Hahn took a year-long sabbatical to work exclusively among the Indians of the larger surrounding region. He established over a dozen mission churches extending over a distance of 125 miles. Precious Blood Church in Banning was dedicated in 1910, and the choice of its title was surely influenced by Fr. Hahn. It is now merged into St. Kateri Tekakwitha Parish along with two chapels on nearby reservations.

In September 1913, Fr. Hahn resigned from the school and was assigned as pastor of St. Francis De Sales Parish in Riverside, Calif. He died on August 3, 1916, in Oxnard, Calif. He was buried in the school cemetery, fulfilling a wish to be buried near his “children so that they could remember me in their prayers.” Fr. Hahn’s love for the Missionaries of the Precious Blood can be seen in the inscription on his grave, which contain the initials “C.PP.S.” after his name. His epitaph also bears the abbreviation “M.A.,” since he received the title of Missionary Apostolic from the Apostolic Delegate in 1903. St. Gaspar also was given that title by Pope Pius VII when the pope commissioned him for the ministry of missions.

Today, of course, the efforts of the “Indian Schools” of that era have come under criticism, much of it valid. The intention of many schools at the time was to assimilate Native Americans into a homogeneous white culture. Often native customs, culture and languages were not valued and even discouraged. At the same time, it seems clear Fr. Benedict Florian Hahn worked selflessly for the good of his charges, who loved him in life and mourned him in death.

What more could any laborer in the Lord’s vineyard ask?

(Fr. Gary Luiz, C.PP.S., is a member of the Atlantic Province. The late Fr. Dominic Gerlach, C.PP.S., published a history of the Rensselaer Indian School that contains a number of references to Fr. Hahn. The article may be accessed here, along with Fr. Gerlach’s An Interpretative Essay on the History of the American Province, C.PP.S.)