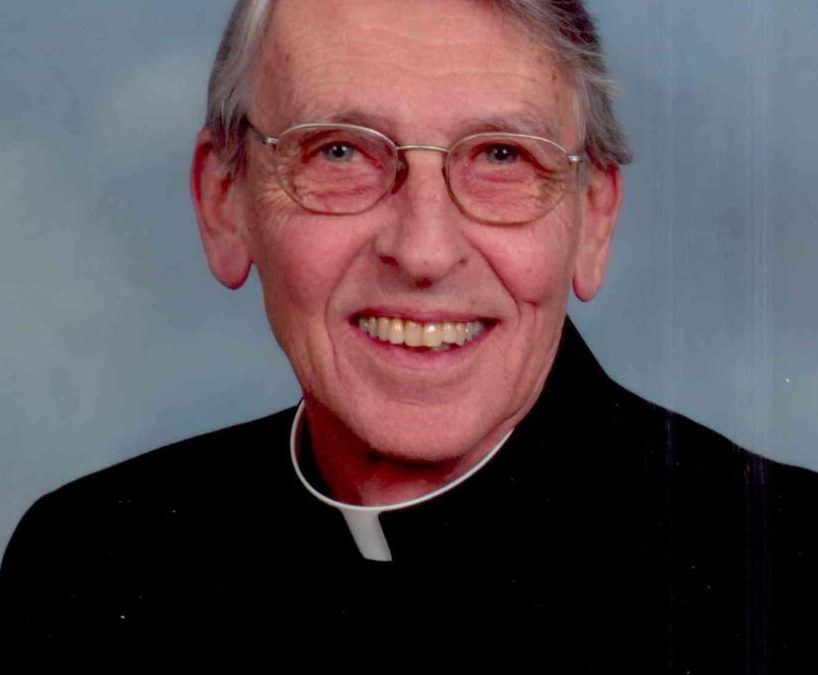 Born: I was born in Kendelville, In. and raised in Rome City, In. –  St. Gaspar parish.

Joined the Missionaries: I entered Brunnerdale High School Seminary in 1952 and was ordained in 1965.

What is your current assignment?
At the present time I am retired, living at St. Charles Center.

What was the most challenging aspect of your assignments?
Going where I was asked to go.

What was the most rewarding aspect of your assignments?
Going where I was asked to go.

What did you do before joining the Missionaries?
I didn’t fall off a horse (as did St. Paul) on my way to the seminary at age 13 in 1952 – I was simply following my older brother’s footsteps. In the meantime, I was just trying to wiggle my way through grade school and resisting growing up.

What do you enjoy doing in your spare time?
I love to read (detective novels, science, theology) and watch movies.

Aside from St. Gaspar, who are some of your favorite Saints?
Some people don’t like their names – I always did. I’m proud to be a Patrick. Recently I learned that going back to 1785 there have been Patricks or Patricias in my family for 9 generations without interruption – wanna guess my favorite saint?

What is your favorite prayer?
For me, nothing can ever beat the Eucharist – shared in community.

What is your favorite:

Books:
Cypresses Believe in God – a novel by Jose Maria Gironella concerning Civil War in Spain, 1931-1936.  Excellent! (Compare it to Hemmingway’s, For Whom the Bells Toll -a 3 day experience of the same conflict).

Ignacio Ellacuria’s Essays – (He was president of UCA in San Salvador and one of the 6 Jesuits along with their house keeper and her daughter assassinated in 1987). Gives not only an overview of Liberation Theology, but also an insight into the thinking and praxis of Pope Francis.

God after Darwin by John Haught – an insightful presentation concerning the harmonization of Science and Faith.

Movies:
The Mission (directed by Roland Joffe, 1986) – the story, the acting, the cinematography, the costuming, the music – just a superb combination that produces an exceptional peek into an historical time in the conquest of South America and the Church’s involvement.

Raising Victor Vargas (directed by Reter Sallett, 2002) – Just a delightful tale of a Latina grandma trying to raise her three grandchildren during a hot summer in a very small apartment in N.Y. (One scene in particular: the grandmother is washing the pots and pans in a small sink – and one of the pots gets stuck. Was this planned or did she just improvise to a natural situation? Beautiful.

Sin Nombre (directed by Corey Fukonaga, 2009) – This movie should be seen by everybody at least twice – and with a box of Kleenex. Starts out in San Salvador and treats of a young couple fleeing poverty and violence and the MS13 gang – moving through Guatemala and into Mexico, riding the Beast (roof tops of trains) heading to the United States and a better life. A must see!!

Can’t leave out Pi (directed my Ang Lee, 2012) – a very interesting and quasi mystical movie. A movie to be shared and talked over with friends.

Holiday:
Perhaps New Year’s Eve – alone, being thankful with God for the past and looking with hope to the coming year.

TV Show:
Programs on nature and science, historical dramas and reruns of Everybody Loves Raymond.

Music:
I could name any number of opi from here to dooms day and still not be done – why? Because I believe that of all the material or physical realities, music is the closest to achieving infinity. Think of it – of all the possible combinations of melodies, variations, harmonies, rhythms, etc. – going back 1, 2 or even 400,000 years ago, as well as previewing historical times and then projecting millions of years into the future: music is here to stay – and beyond!