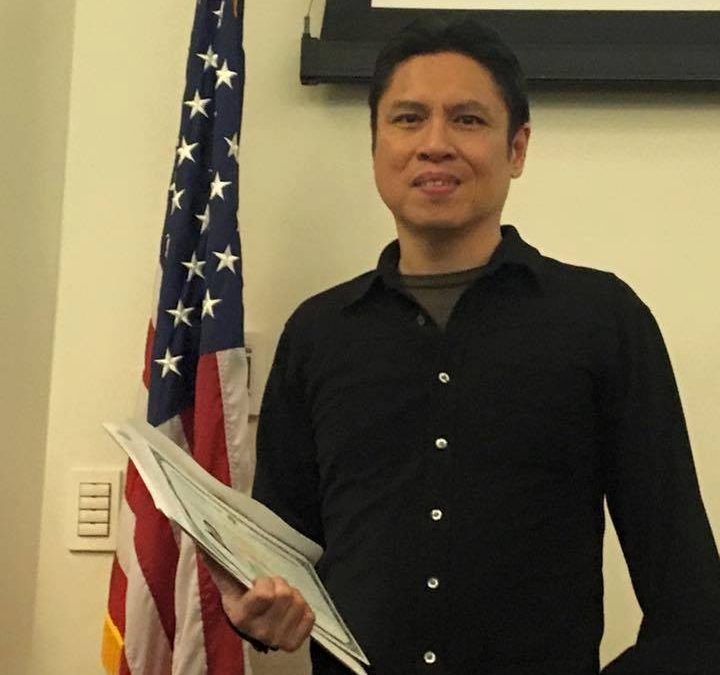 On the surface, it’s all about the airports. And fewer hassles in general.

A United States passport allows its holder to move more easily through the airport and, depending on the destination, through the world, says Br. Antonio “Ton” Sison, C.PP.S., and he ought to know. As of March 24 he now holds one of his own. Before he was a U.S. citizen, he said, it was tedious to fill out reams of forms every time he wanted to travel internationally.

But what began as a task that was mostly about the paperwork ultimately became another kind of journey, as his new citizenship and his forever birthplace gave him an official dual identity that truly reflects who he is.

Br. Ton was born in Manila, the Philippines, and his family, with whom he is very close, still lives there. He studied theology in the Netherlands and there met Fr. Robert Schreiter, C.PP.S., who helped him in his discernment to the religious life as a brother and Missionary of the Precious Blood. Br. Ton was definitively incorporated in 2006. For more than 10 years, he has been on the faculty of the Catholic Theological Union (CTU) in Chicago and is also an author and film reviewer.

He decided to become a U.S. citizen because “I was committed to the Precious Blood Community in the Cincinnati Province. Everything else that had to do with my status was because of that.”

After he applied for citizenship, he was sent a thick packet of materials to review. The first step was an interview process, “which is a test on American history, culture and government. You are given 100 items to study, everything from the Mayflower to Barack Obama. I chose the most difficult questions and did extra studies, nerd that I am. When I got to the interview I was asked, ‘Name three official holidays of the United States.’”

For Br. Ton, the process was painstaking but relatively easy because he has held a green card for a number of years. “First you get a religious worker visa, then residency. With a green card, you are a semi-citizen but not quite. The requirements get easier as you get deeper into becoming a citizen,” he said. “The interview and the test were easy. The people were open and friendly to me, very welcoming. After all, if you reach this stage, you’re sort of a citizen already.”

It was easy until that moment when he took his first real look at the oath of U.S. citizenship. The first line reads, “I hereby declare, on oath, that I absolutely and entirely renounce and abjure all allegiance and fidelity to any foreign prince, potentate, state, or sovereignty, of whom or which I have heretofore been a subject or citizen.”

For Br. Ton, who lives and breathes in a world of words, those words stung. “Oh, I felt that,” he said. “It was as if I was turning my back not just on my country, but on my family, my roots, my home.”

Because he intended to reapply for his Filipino citizenship as well, he later learned that renouncing his allegiance to his country was just a step in the process. “Relax, it’s all a formality,” he told himself. “I can go to the Filipino consulate and recover the citizenship that I Iost.”

So, on he went to the ceremony where he would swear allegiance to the United States, on February 24 in Chicago. “The ceremony was very moving,” he said. There were more than 180 people “all coming from various countries. It’s very organized. They lead you to an auditorium where they do a roll call by country: Albania, Bolivia, Colombia. You stand when your country is called.

“There were all sorts of people there, Europeans, Asians, Africans. It really made you feel that you belong to a bigger world, not just your small silo of life. This is now my picture of what America is.”

There was a speech given by one of the immigration officers, and “I remember one line, ‘A lot of you have gone through big sacrifices to be able to reach this point.’ It was very moving because beside me were people from Africa, and they were very emotional. For all I knew, they were refugees, desperate for a new start. And I realized that some people had to make huge sacrifices for this citizenship. The officer added, ‘It is time to leave your old life, to look to the future as you begin your new life as a citizen of the United States.’ It was a hopeful message.”

It was in keeping with how Br. Ton sees his adopted country. “It is an optimistic culture. I knew that from the start,” he said. “It’s messianic, even. For better or for worse, it’s the way that the U.S. sees itself—there’s a sense of calling.”

He was happy in his new country, with a pang of loss about his home country. And then on April 19, he reported to the Filipino consulate in Chicago to recover his citizenship. “The Philippine oath is written in a language that is much more emotional than the American oath. The very first line is, ‘I love the Philippines with all my heart.’ It goes on to talk about how the country has nurtured you, like a mother. It’s about family; it’s personal.”

When he told his brothers and sisters how his heart welled up when he remembered the Philippine oath he learned by rote from childhood, they thought it was funny how something they’d all recited unthinkingly in school now had renewed meaning.

And so he is a dual citizen, which is only proper, he said. “It resonates with who I am right now. I am a person of two worlds. I am no longer completely Filipino, nor am I completely American. There’s a liquidity to my identity, and that makes me more flexible, resilient and sensitive to both cultures. In a missionary community, you’re called to be open to people from a diversity of cultures. Becoming a dual citizen is a real gift. And challenge.”