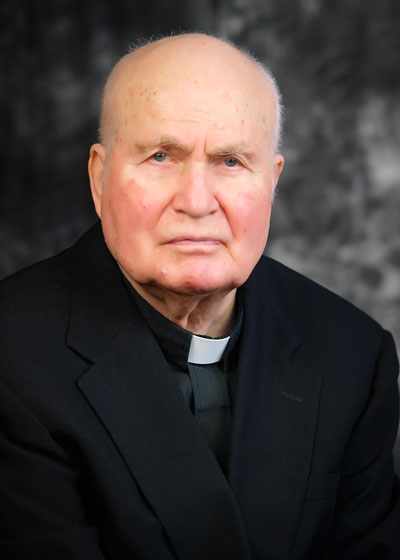 He was born on February 10, 1927, in Grass Creek, Ind., to Robert and Ethel (Layman) Bousman. He was later adopted by Marion and Mary Jo Bender and raised in Monterey, Ind.

After ordination, he served for four years as an assistant at St. Agnes Church in Detroit. In 1955, he volunteered for the Missionaries’ mission in Chile, where he served in C.PP.S. parishes in Santiago and in southern Chile. He was also spiritual director of the Missionaries’ minor seminary in the early 1960s, and later was the first elected director of the Chilean Vicariate. (Before that time, directors were appointed by the provincial director.)

Fr. Bender returned to the U.S. in 1982. He was then appointed associate pastor of St. Mary Church in Garden City, Kan. Later he moved to Cleveland, where he was active in Hispanic ministry.

He returned to South America in 1987, this time to the Missionaries’ mission in Peru. He served in their parish in La Oroya, high in the Andes, and also at Our Lady of the Light Parish in Lima. Fr. Bender remained in Peru until his declining health forced his return to the U.S. in 2010. He spent the last seven years in retirement at St. Charles.

Fr. Bender “lives on in the memory of many, many people,” said Fr. James Gaynor, C.PP.S., who served with him in Peru. In La Oroya, Fr. Bender founded a center for senior citizens, where they could come together for a meal and companionship each day. He was also a gifted musician who composed his own music and played it on his guitar for the people he served, especially children.

“The elderly and the lonely had a special place in his heart,” Fr. Gaynor said. “May he rest in peace and enjoy new life among kind people and saints like himself.”

Fr. Bender is survived by numerous nieces and nephews, great-nieces and great-nephews from both his birth and adopted families, many of whom considered him a spiritual anchor. Even though he lived far away, his support for his family, in all their endeavors, triumphs and troubles, was constant and his letters home remain a treasure to them.

He was preceded in death by his sisters, Helen Crowe (and her husband, William Crowe), Janet Tverelle, Ireta (Patsie) Wilson, and Shirley, and Mary Jo Swartzell (and her husband, Marion); and a brother, Leroy Bousman.