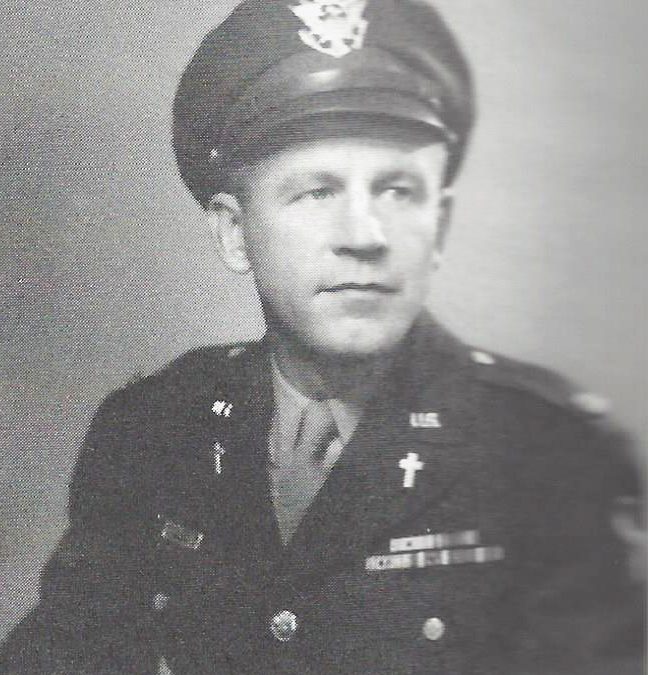 Service as military chaplains has been one of the many ministries taken on by Missionaries of the Precious Blood over the years.

In 1944, near the end of World War II, 41 Missionaries were listed as having served in the Armed Forces as chaplains. One of them, Fr. Clement Falter, C.PP.S., was the first U.S. chaplain killed in the line of duty in that war.

Another, army chaplain Fr. John Wilson, C.PP.S., spent three and a half years as a prisoner of war in the Pacific Theater. During much of that time, his family and his religious congregation was not sure of his location or even if he was alive or dead. Of his time in captivity, fellow chaplain Fr. Killian Dreiling, C.PP.S., wrote that Fr. Wilson “should have died a thousand deaths in as far as he was fearless, and defied (his captors), saying Mass when and where he pleased.”

On September 15, 1945, an elated Fr. Joseph Marling, C.PP.S., then provincial director, wrote to his brothers in Community that Fr. Wilson had indeed survived his time in captivity, which included being a part of the Bataan Death March.

“The long-awaited news of Fr. John Wilson’s safety reached (St. Charles, the Missionaries’ seminary, in) Carthagena. An Associated Press dispatch mentioned Fr. Wilson’s name. The story told that the surrender ceremonies on the battleship Missouri were heard in Tsuruga prison camp at Osaka, over a radio set which had been hastily rigged up. Shortly thereafter, Fr. Wilson conducted service for some 300 captive American soldiers. He did this in vestments to which he had clung ever since the death march on Bataan. . .”

That night at St. Charles, Missionaries and their students closed their nightly Holy Hour with the singing of the Te Deum, thanking God that Fr. Wilson had survived.

After his return to the U.S., Fr. Wilson went on to serve as one of the first C.PP.S. Missionaries to Chile, and as a pastor in many parishes in the U.S. He died in 1992.

We thank God for the example of selfless service that Fr. Wilson and many others set for us throughout their lives.