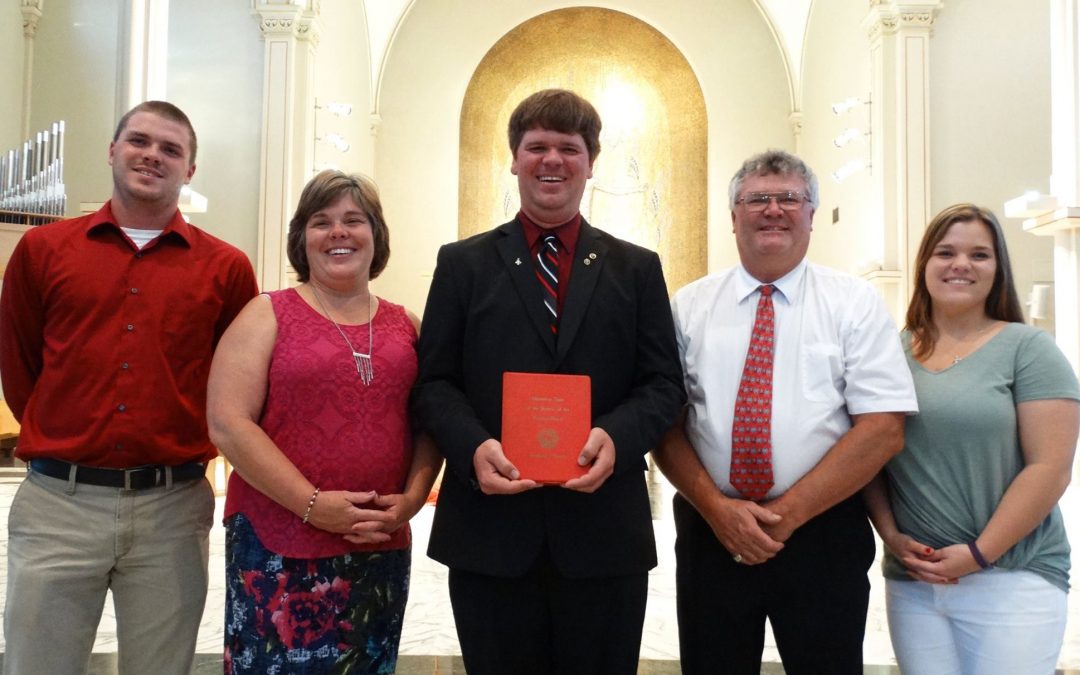 Greg Evers made his first commitment to the Missionaries of the Precious Blood during Evening Prayer of the opening night of the Cincinnati Province’s annual assembly in June.

After Evers was presented by Br. Matthew Schaefer, C.PP.S., director of formation, his first commitment was accepted by Fr. Larry Hemmelgarn, C.PP.S., provincial director, who presented Evers with the Normative Texts.

Evers, of Maria Stein, Ohio, was accompanied at the rite by his family, a fact that did not go unnoticed by Fr. Ken Schroeder, C.PP.S., who offered the homily.

Fr. Schroeder was formerly the pastor of St. John the Baptist Church, Evers’ home parish, and noticed something about the young man that suggested he might consider a call to the consecrated life. Fr. Schroeder thanked Evers’ parents, Roger and Mary, and siblings Dave, Jill and Allison “for sharing your son and brother with us. Good help isn’t cheap. Roger could have used Greg’s help on the farm. However, along with his grandparents, Roger and Mary are supportive of Greg pursuing a religious vocation. And we’re deeply grateful to you, and to Almighty God, for that.”

Fr. Schroeder described some of Evers’ vocational journey in his homily. After he graduated from high school in 2010, Evers, a former band kid, “put his trombone away and began his college years at Wright State University Lake Campus, studying agricultural science. Once a farmer, always a farmer.” He began his discernment with the Community then transferred to St. Xavier University in Chicago, living in the C.PP.S. house of formation there.

In December, Evers completed his undergraduate degree in philosophy from St. Xavier. He then spent several months in Guatemala, honing his Spanish and getting to know the Missionaries and candidates in the Central American mission.

Now, he is in the midst of special formation, the first portion of which he is spending in the Kansas City Province.

The first commitment ceremony “was really special,” he said. “I have attended other celebrations in which the other candidates were celebrated, and I can remember thinking, ‘This could be me someday.’ Once we started Evening Prayer at the assembly, suddenly the thought just hit me: ‘This is actually happening.’”

Evers said he was ready to take another step further into discernment. “As with dating, as time goes on, the couple gains a deeper understanding of the other and they deepen their commitment. The first commitment is similar because I will now be studying the history and spirituality of the Congregation to gain a better understanding of who the Missionaries of the Precious Blood are. I am dedicating the next 15 months to that.”

The first commitment is a two-way street, he added. “During the ceremony, the professed members also made a commitment to support and walk with me in my journey through special formation,” he said. “I get to learn more about the Community, and the Community learns more about me.”