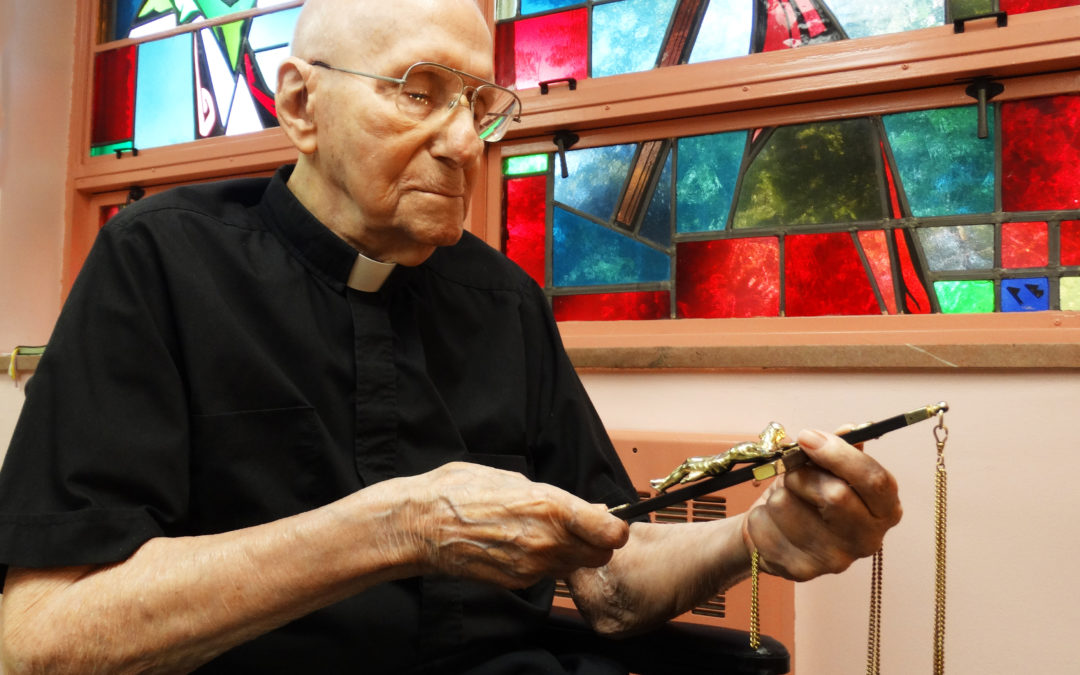 Happy 104th birthday to Fr. Leonard Kostka, C.PP.S., the oldest living Missionary of the Precious Blood in the world.

Fr. Len was in ministry for many years at Saint Joseph’s College in Rensselaer, Ind. He now lives in retirement at St. Charles Center in Carthagena, Ohio, where he studied for the priesthood so many years ago.

He is bemused by the fact that he is the oldest living Missionary of the Precious Blood in the world. It’s not something that he planned. “There were 20 people in my class at St. Charles, and all are dead, by the way, except me,” he once said. “Imagine a row of pictures of your classmates. You ask yourself, ‘Who is going to die first?’ You never think it will be you. You always imagine yourself to be somewhere in the middle. You never think that you’re going to be the last one hanging on.”

Fr. Len is doing much more than just hanging on. He attends daily Mass in the St. Charles infirmary chapel. He enthusiastically watched the Winter Olympics. And, as he has all his life, he’s dreaming up ways to bring people closer to Christ. His latest idea is for a statue or sculpture of Jesus holding a lamb, an image that he feels would appeal to children, to help them see how much Jesus loves and cares for them.

He’s also been focusing on the mission cross that he received at his ordination, nearly 78 years ago. “The mission cross is a vivid reminder that we’re a missionary community.”

He ponders these and many other things. “I’ve got nothing to do but ponder,” he said with a smile.