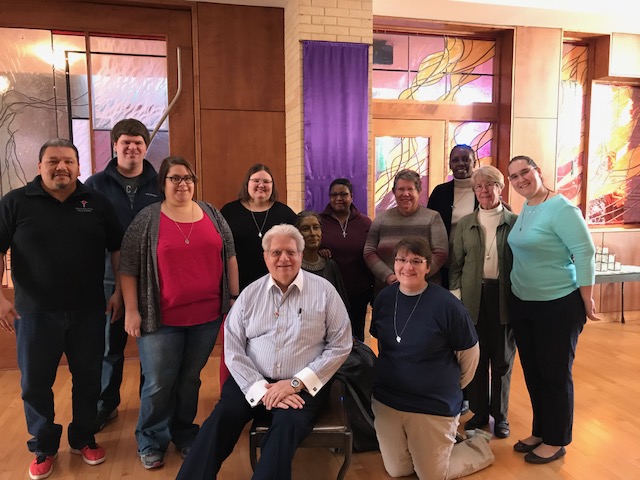 Candidates in formation from Precious Blood communities gathered at the Adorers of the Blood of Christ (ASC) Center in Wichita, Kan., on February 23–25.

The annual gathering is meant to strengthen ties among the future members of the Precious Blood communities, who spend the weekend sharing prayer, conversation, meals and recreation. The theme for the weekend was “Perspectives on Precious Blood Spirituality and How to Live it Daily.”

Greg Evers, who is in special formation with the Missionaries of the Precious Blood, said that he was happy to get to this year’s gathering; he missed the 2017 gathering because he was in the C.PP.S. mission in Guatemala.

“For me, the value of these weekends is that we get to catch up with some of the candidates from other communities,” he said. “I enjoy hearing their stories, hearing about their ministries and how the formation process has been for them. Sharing stories is one of my favorite parts when we get together.”

Fr. Dennis, the director of interprovincial advanced formation, invited the candidates to think of times in their own lives where they experienced Precious Blood spirituality, and then told them his story. He was a 21-year-old student at Saint Joseph’s College when his grandmother was diagnosed with cancer.

“I kept asking God for a miracle, in as many different ways that I could think of. Nothing seemed to work,” he said, as his grandmother grew weaker and weaker. “So I decided to tell God what I really thought. Psalm 22 is one way to do that. I made sure the chapel was empty at the college, and I went in there and basically screamed, the psalm, which begins ‘My God, My God, why have you abandoned me,’ and goes on with ranting and raving. It ends with, ‘If you hear me this time, I will tell your story in the assembly of the faithful.”

When he had vented all of his pain and rage to God, he sat in front of the crucifix where, exhausted, he fell asleep. “When I woke, it felt like someone was holding me. And I heard a small voice saying, ‘I know what it’s like. Someone I loved died once too. God and I cried for a while. Then I told God that she’d suffered long enough, ‘And if you want her, she’s yours.’”

As he walked back to his dorm, a phone call came from his mother: his grandmother had died, “at the very moment I’d told God he could have her.”

But there was more to the story. “It was there, standing at the foot of the cross, that God changed my life. Because several weeks before, I had decided that when the semester was over, I was going to drop out of the formation program. It was not the prayer I wanted God to answer originally, but when God answered it, he answered so profoundly it has affected me ever since.”

He talked with the candidates about “how it’s okay to be mad at God. That many of us have stood in the shadow of the cross ourselves. And that one of the characteristics of Precious Blood spirituality is that God is with us in the middle of our sufferings, even when it feels like he is not.”