Remember Who You Belong To 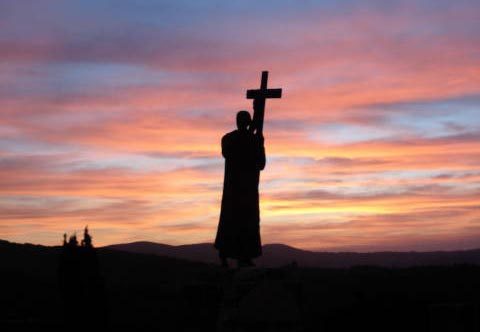 It was the first Monday of June 1988. I had just graduated from high school. I was on my way to college later in the fall. It was the Monday after my high school graduation, but this Monday was my first day of a new job in a grain elevator/corn products mill.

I was shoveling a pile of corn feed onto a conveyor belt and into a hopper. It was over 100 degrees in my department, and I was surrounded by all of these loud machines going ta-pocketa -ta-pocketa. I was alone. I had no doubt that I was up for a summer of hard work in inhospitable conditions. However, I was overwhelmed by the ta-pocketa-ta-pocketa of the machines that had laid siege to me that Monday morning.

I began to worry. What if everybody forgot me and I was left alone to a grim fate of feeding these machines? What if I get lost and never find my way out? Maybe this was my fate . . . I would never see my family again. I was going to go down surrounded by ta-pocketa-ta-pocketa. I was having a Walter Mitty moment where the machines were huge monsters wanting to devour me. Now I was shoveling corn feed like my life depended on it. This was my Waterloo: a last-ditch effort to ward off the monsters that were surely going to devour me.

Then a face appeared to me on my left. It was a grade-school basketball coach who worked as an electrician at the grain elevator. I came to my senses and asked Coach Matlin a few questions that betrayed my rookie status at this place. He said these words to me: ”Look kid, don’t get yourself killed over this job because when you die, this place will still be here.”

Like Elijah, I was in the wilderness, and I needed an angel to prompt me and move me in the right direction. (Unlike Elijah, I desperately wanted to live). Coach Matlin got me out of my own wilderness that morning and helped me move forward in my life’s journey.

Some clarification is required here. Elijah is in the wilderness because he, with the help of the people of Israel, killed the 450 “prophets” of Baal. Queen Jezebel learns of this and sends Elijah a death threat in a message. Elijah is afraid and flees south into Judah. Even though Elijah did this with the assistance and support of the Israelites, that may very well have protected him if he had stayed in Israel. He fled into Judah, a kingdom outside of Jezebel’s control, he is still afraid for his life and asks God to kill him. Elijah did not put these false prophets to death just for spreading false ideas. Just imagine, these prophets had the authority of Queen Jezebel to sequester crops that Israelites needed for their welfare. They may have excised extra taxes on the Israelites. They may have conscripted forced labor to build monuments and temples to a false god. They may have divided families against each other (Yahweh vs. Baal), and once you tear apart families, you are tearing apart the social fabric of a culture.

So, Elijah called out the prophets on Mount Carmel in front of the Israelites. Once their smoke-and-mirrors practices were exposed, they were seized by the people and later put to the sword. Even though Elijah had accomplished this, he was hiding in the wilderness of Judah asking God to kill him. He forgot that he was in a safe place out of Jezebel’s control. He forgot that he had the support of Israel. Elijah was right to say to God that he was no better than his family, tribe, and people. However, he forgot that he belonged to something even better than his family.

The angel prompted Elijah and even fed him. In doing so, the angel reminded us of who Elijah belongs to. In the Gospel, Jesus reminds us of who we ultimately belong to. God provided bread for Elijah in the first reading and Jesus reminds us that that relationship continues from God to the people through Jesus. Like Elijah, the people argue that Jesus is only a mere product of his family. However, Jesus is so much more because he is God’s son. We are so much more because we are all of God’s children. If the angel came to shake Elijah back to his senses, Jesus did this to the people in the Gospel and continues to do so to us this day. Like Elijah, we may get into something way over our heads. We may accomplish something bold and then all of a sudden lose faith in ourselves. We might get burned out in work, ministry, life. Though we believe in Jesus, we do need the push like Elijah from an angel, or need to be reminded by Jesus of whose we ultimately are and where the source of our strength lies in.

On this Sunday, as we prepare to receive the Lord in the Eucharist, let us remember that the bread we receive is truly the Bread of Life. This bread sustains us through fear, burnout and times when we lack faith.

Br. Brian Boyle, C.PP.S., is a hospital chaplain in Northwest Indiana. He is also the associate director of Companions (lay associates) of the Missionaries of the Precious Blood.