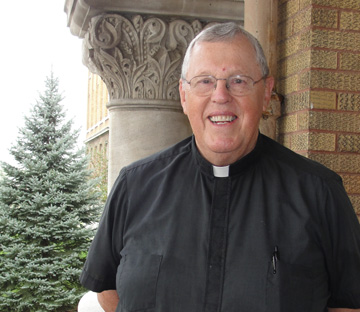 In honor of National Vocation Awareness Week, we’re sharing the stories of some of our Missionaries’ vocational call.

When Fr. Ken Schroeder, C.PP.S., talks about the qualities of a good priest, he has a specific quality in mind. “I look for a strong kid. I sort of like the rough-and-tumble guys, guys who remind me of myself,” said Fr. Ken, who over the years has talked with many young people about a vocation to the religious life.

Throughout his life as a priest, Fr. Ken has drawn many people, young and old, closer to the light of Christ. He particularly loves to encourage young people and is not shy about giving them a little encouragement, a pat on the back or a friendly shove in the right direction, just when they need it the most.

He delights in telling his own vocation story, because it still amazes him that he became a Missionary of the Precious Blood. A lively boy who would rather be anywhere but in a classroom, he was with his best friend, Don, on a country road not far from his home in Ottawa, Ohio. “We were riding our bikes back from the Columbus Grove swimming pool when Don turned to me and said, ‘Hey, Kenny, let’s stop at our homes and tell our parents that we’re going off to the seminary.’ I almost fell off my bike,” Fr. Ken said.

Becoming a priest was Don’s dream, not his. Still, the pair arrived at Brunnerdale, a high school seminary then operated by the Missionaries of the Precious Blood in Canton, Ohio, on September 1, 1951. Ken soon found himself in over his head. “We went to school six days a week at Brunnerdale, and I hated school,” he said. “Don hated it even more. After two weeks he came to me and said, ‘I’m going home. I’ve gotten you this far – now you’re on your own.’”

Fr. Ken still can’t explain what kept him at Brunnerdale (which he grew to love) and then through the major seminary to his ordination in 1965. “I still ask ‘Why, Lord?’ But I can’t imagine doing anything else,” he said.