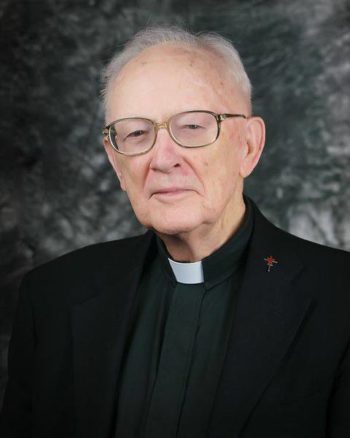 Fr. Robert Conway, C.PP.S., 93, died on December 8, 2018, in the infirmary at St. Charles Center in Carthagena, Ohio, where he made his home. He had been in failing health.

Fr. Conway was born on September 19, 1925, in Detroit, to Harold and Marie (Oberle) Conway. He later moved with his family to Roseville, Mich. He entered the Society in 1941 at Brunnerdale, the Congregation’s minor seminary outside of Canton, Ohio. On December 19, 1953, he was ordained to the priesthood at Mount St. Marys Seminary, Cincinnati.

Fr. Conway had served as a pastor, chaplain, educator, and missionary in Latin America during his 65 years as a priest.

Fr. Conway first moved to St. Charles in 1995. He returned to education ministry in 2003 when he became chaplain of Ave Maria College in Ypsilanti, Mich. In 2007, he was named chaplain and an adjunct faculty member of Ave Maria University’s Latin American campus in San Marcos, Nicaragua.

He was preceded in death by two sisters, Ann McClory and Mary Mullins; and two brothers, Joseph Conway and Fr. Thomas Conway, C.PP.S.; and a brother-in-law, Marion Lee.

Fr. Conway was “a faithful and holy priest. In his ministry, he continued to pour himself out, preaching on behalf of the missions later in life,” said his nephew, Msgr. Robert McClory. “He was always supportive of his nieces and nephews. As children, we were fascinated by the fact that he was a missionary in Chile for 14 years. We received letters and visits from him; his desire to serve the missions, wherever he was called, inspired us all.”

Fr. Conway was a tireless intellectual. He continued to read and write, researched his family’s history and kept apprised of current events in his later years. When asked shortly before his death to reflect on his 65 years as a priest, Fr. Conway said that he treasured the goodness of the people to whom he had ministered.