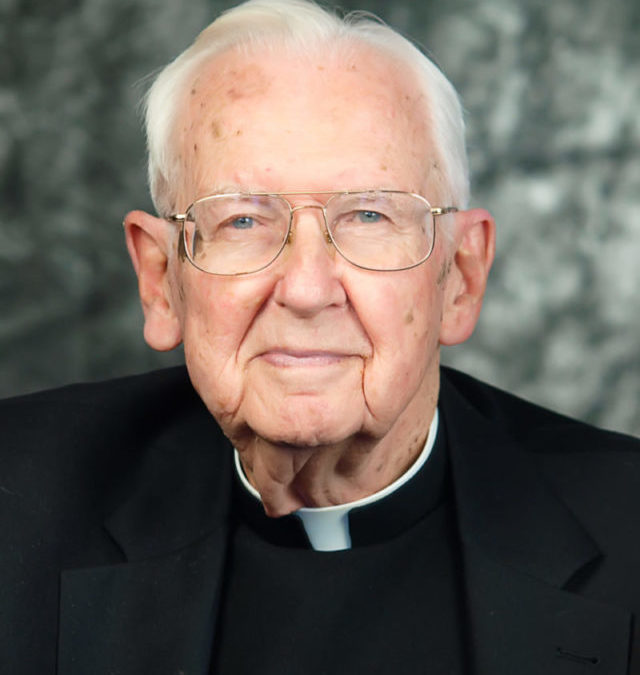 He served in the U.S. Army as a technical sergeant in World War II. After his military service, he entered the Society in 1949 at Saint Joseph’s College in Rensselaer, Ind., and was ordained on June 1, 1958.

For many years Fr. Beischel was a hospital chaplain and was also active in parish ministry.

After his ordination Fr. Beischel ministered at St. Anthony Parish in Detroit then was named assistant pastor of Precious Blood Church in Fort Wayne, Ind. From 1961-1966 he was the treasurer of Brunnerdale, the Community’s former high school seminary in Canton, Ohio.

Fr. Beischel became a hospital chaplain in 1966, serving for many years at St. Elizabeth Hospital in Dayton; St. Rita’s Medical Center in Lima, Ohio; and Providence Hospital in Cincinnati. In 2000, he became a chaplain at the Dayton Heart Hospital and also served at St. Albert the Great Church in Dayton. In 2008, he retired to St. Charles Center in Carthagena, Ohio. At St. Charles, he volunteered enthusiastically to help at local parishes for many years.

He is survived by his brother, Mark (Christine), Council Bluffs, Iowa; and a sister, Sr. Lucy Beischel, R.S.M., Cincinnati; a sister-in-law, Ann Beischel, Cincinnati; and numerous nieces and nephews, great-nieces and great-nephews.

Fr. Beischel ministered to thousands of people in his years as a chaplain, many of whom he saw only once. His sincere smile and staunch faith gave them something to lean on when they were sick and scared. “Hundreds of times the beeper woke me up in the middle of the night, sometimes twice in a night,” he said. “The priesthood always had something to offer to the people who were calling for me: they wanted to be anointed, or to receive communion, or have me hear their confession, or just to be there with them.”

Later in life, he became known as a baker; he baked and gave away thousands of loaves of bread, keeping a list of recipients in a notebook in his kitchen. The bread was symbolic of his life of service.

A Mass of Christian burial was celebrated at 2 p.m. on Thursday, March 7 at St. Charles Center, with Fr. Jeffrey Kirch, C.PP.S., presiding and Fr. Ken Schroeder, C.PP.S., as homilist. Burial followed in the Community cemetery..