Go and Sin No More 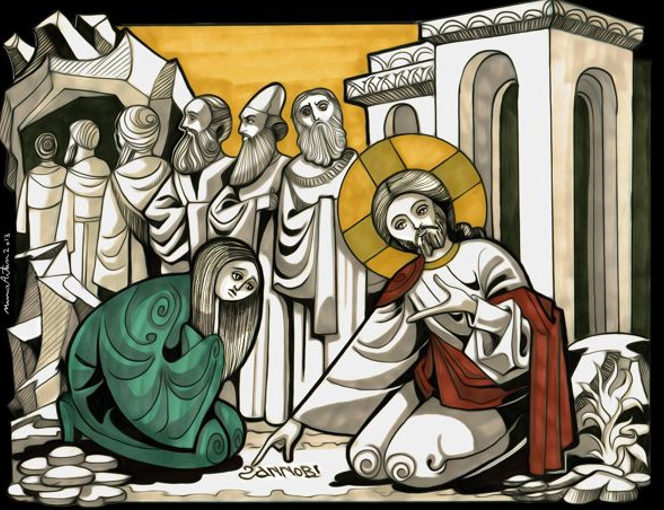 Let the one among you who is without sin be the first to throw a stone at her.
John 8:7

When I was in parish ministry, I would be asked by parishioners about the morality of a particular choice. In some cases, they were asking for their own moral growth; but in other cases, they were asking so that they could judge others. Usually their tone of voice gave them away. My task was to answer the factual question they had asked, while inviting them to worry less about the person they were judging, and more about themselves

Jesus does something similar in today’s Gospel. He doesn’t ask the scribes and Pharisees, “Where is the man she was sinning with?” He doesn’t suggest that there was nothing wrong with what she had done. Instead he encourages the one in the crowd who is sinless to throw the first stone. He calls them to recognize that they are no holier than she is. The crowd was so caught up in trying to punish her for her sin that they were looking right past the plank that was stuck squarely in their own eyes.

The woman’s sin merited death according to the Law, and Jesus doesn’t say otherwise. Yet he does find a way forward. Jesus shows her mercy and gives her life. In challenging the crowd to look at their own sinfulness, he is also inviting them to open themselves to the same mercy that he shows the woman.

It is a reality of our human nature that we readily acknowledge the faults of those around us, while often ignoring our own. We see the error of those around us, and focus our attention outwardly. Correcting the other is easier than correcting ourselves. But the Christian is called to something more. We are called to a life of conversion, in which we acknowledge our own sinfulness.

It is in acknowledging our sinfulness and our need for Jesus that we are able to receive His Grace and hear Him say to us, what he said to the woman. “Neither do I condemn you. Go, and from now on do not sin anymore.”

Fr. Steve Dos Santos, C.PP.S., is the director of vocation ministry for the Missionaries of the Precious Blood, Cincinnati Province.