“I Liked What I Saw of the Missionaries” 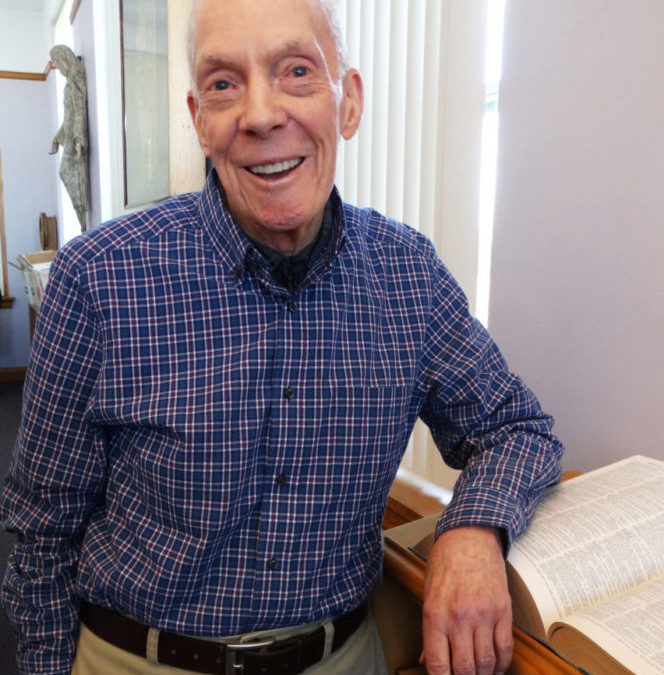 This profile of Br. Charles McCafferty, C.PP.S., who has been a religious brother for 49 years, was done in honor of Religious Brothers Day, May 1, 2019.

These days when discerners are interested in the Community, they are invited to spend some time with the Missionaries at a retreat or in a Community house. That’s not a new thing. It happened to a young man back in the 1960s, a lapsed Catholic who came roaring back to his faith or whose faith had come roaring back to him.

His name was Charles McCafferty.

It still is, but now he is Br. Charles McCafferty, C.PP.S. He’s been a religious brother for 49 years. It’s a life that has brought him many miles from home, into the lives of many people—people who have become his family.

Br. Charles was born in Scotland (one of only two in the C.PP.S. Register of Members who can claim that distinction) and raised in Queens, one of the five boroughs of New York. He attended Catholic grade school and high school before being drafted into the army in 1954. He served in Germany as the Korean Conflict was winding down, and when he came home, got a job as a night-shift clerk in the post office in New York.

If it sounds like an unremarkable story so far, get ready. The Holy Spirit is about to make an entrance.

“Life was meaningless,” Br. Charles said. He’d drifted away from his faith; his parents had died; he felt disconnected and adrift. Then he stopped in to see one of the priests in his old parish rectory.

“I went to confession and he gave me a few things to do. I felt I could become holier if I went to Mass every day—and it happened,” he said.

From there, he felt a religious vocation welling up inside—but it was not to the priesthood. He thought about the brothers who had taught him in high school, and knew that it was the life of a religious brother that was his calling.

A Precious Blood priest came to his parish to give a retreat, and Br. Charles sought him out. Put in touch with the Missionaries, Charles McCafferty, then 34, was invited to spend a week visiting Brunnerdale, the Missionaries’ former high school seminary near Canton, Ohio. “The vocations director said I could look them over and they would look me over. So I did. I liked what I saw of the Missionaries of the Precious Blood.”

That was in 1968. In September of that year, Br. Charles entered formation at Saint Joseph’s College in Rensselaer, Ind. He returned to Brunnerdale for special formation, was professed in 1970, and stayed there for seven years.

At first he did the laundry for the school’s 170 students; later he was part of the recruiting team for Brunnerdale, visiting potential students and their families to tell them about the school. His New York accent got him in the door of many homes in the Midwest—people always asked where he was from and were amazed by his answer—but his sincerity and honesty kept the doors open.

After that, he returned to Saint Joseph’s, where he earned a degree in theology with a minor in philosophy. “I got good grades—I had an aptitude for reading and writing. I loved to write papers. Most people don’t, but I found I was good at it and had time to do it,” he said. He also served as sacristan for Fr. Len Kostka, C.PP.S.

He stayed at the college for seven years and also helped out with the religious education program at St. Augustine Parish in Rensselaer. In 1981, he moved to St. Charles Center in Carthagena, Ohio, and worked at the Messenger Press, which at the time was owned by the Community. Br. Charles was a linotype operator and proofreader. Again, he helped with religious education classes at a local parish.

Br. Charles left the Messenger Press in 1999 for ministry at the Sorrowful Mother Shrine in Bellevue, Ohio. He was local director, served Mass every day, led the Stations of the Cross outdoors, and helped in other ways with the steady stream of pilgrims. Throughout his life as a brother, he lived in many of the Community’s major houses, “and I got to know a lot of the people in the Community by doing that.”

He reached out to the people of God in many ways. He was involved in Crusillo and the Catholic Family Movement, both of which “changed a lot of lives for the better,” he said. For many years, he was the sponsor of the Companions group that met at the shrine. Those were all ways for him to get involved with the people of God, to build for himself a family.

But his closest family is the Missionaries. “I’m an only child. My parents died by the time I entered the Community, so the Community became family for me—and still is. That’s the way I see it, then and now—as family. They are people I can fall back on and rely on. They’re trustworthy and I feel comfortable with them.”

Now 85 and back at St. Charles Center, he’s still in reasonably good health but has learned his limits. “I don’t feel 85, but the doctor told me I have to slow down,” he said. “A lot of people say, ‘I don’t want any charity.’ But at a certain age you have to realize, ‘I need people to help me’—and you’ll need more help as you get older. I’m conscious of all that. But I’m also accepting of it. The will of God is involved in all this, and it is my destiny.”

For him to give his life in service as a religious brother: that is also his destiny. It’s not always been easy; through the years he’s seen many people who initially said yes to a religious vocation turn away from it and leave the Community and maybe the Church as well.