Celebrating 60 years as a Religious Brother 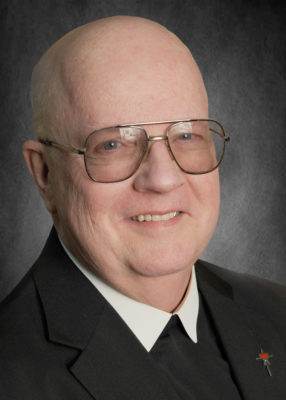 Congratulations to Br. Theophane Woodall, C.PP.S., who this year is celebrating the 60th anniversary of his profession.

After his profession, Br. Theophane ministered for nine years at Brunnerdale, the Society’s high school seminary near Canton, Ohio. He then served for a year at St. Mary’s Novitiate in Burkettsville, Ohio, before his assignment in 1969 to St. Charles Seminary, now St. Charles Center, in Carthagena, Ohio, where he still makes his home.

Br. Theophane was the coordinator of liturgy and sacristan at St. Charles for many years. He continues to serve as organist and local director. He also directs the Precious Blood Resource Center there. For 22 years, he taught high school religious education classes in several Mercer County parishes.

The Missionaries of the Precious Blood is a religious society of priests, brothers, and lay associates founded in 1815 by St. Gaspar del Bufalo. Society members work as missionaries in parishes in the U.S. and abroad, in education, and in a wide range of apostolates promoting the cause of God’s reconciliation worldwide by proclaiming the Word.