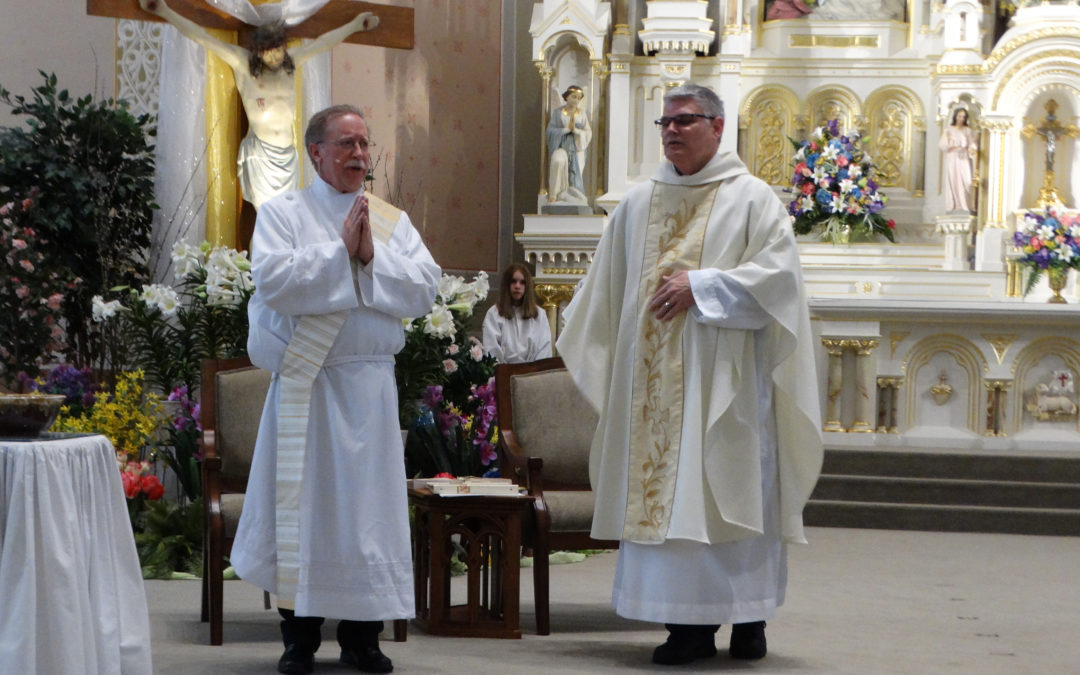 It’s hard to know where Charlie Salways’s faith journey will take him next, but it’s easy to see where it started: in a little country church in Van Wert County, Ohio, less than a quarter-mile from the family home. “My mom was the janitor and my dad was the custodian at the church,” Charlie said. “Dad made sure there was coal for the furnace. He rang the bells. Mom kept the place clean. We were there every Saturday, making sure it was ready for Sunday. My playmates were the pastor’s kids.”

Growing up as part of that little Lutheran church taught him all he needed to know about a life of service. “That’s just the way we were raised,” he said. “My mom and dad taught us what it meant to be a servant to others. We were always ready to make things happen for our church. That was what life was about.”

His life is still about that—now more than ever, as he was one of 15 permanent deacons ordained by Archbishop Dennis Schnurr on April 27 at the Cathedral of St. Peter in Chains in Cincinnati. Deacon Salway and his wife, Judy, are also C.PP.S. Companions (lay associates) with the group in Celina, Ohio.

Deacon Salway credits his wife for bringing him into the Catholic Church. “If we were going on a date on a Saturday night, we had to go to Mass first,” he said. Drawn by her faith into the Church, he was brought into the Church also by Fr. Ken Alt, C.PP.S. He became more and more active as they were married and became parents. While working fulltime as a project manager for a commercial construction firm, he was an eager volunteer at IC, overseeing the church’s renovation project in 2003 and helping lead the confirmation class.

“That confirmation class was the first thing God opened up for me. To me, that was a real growth experience. I had never studied our religion enough to teach it to somebody else,” he said. “I studied it, and I really got into it.”

When the parish had an opening for a youth minister in 2011, he applied and was hired. He and Judy made their first covenants with the C.PP.S. in 2013. That same year, IC’s pastor, Fr. Ken Schnipke, C.PP.S., suggested that he take the lay pastoral ministry training offered by the archdiocese.

“The program was really good, and I was halfway through it when Fr. Ken said to me, ‘They’re going to have a presentation on the diaconate at St. Charles, why don’t you go?’ Going to that meeting, I was thinking, ‘I have no business stepping into a three-year program that involved every other weekend down in Cincinnati—plus a fulltime job plus family. I was thinking, ‘God, I know you are asking me to do this, but how am I going to fit this into my schedule? How will I be able to do what you’re asking?’”

Judy had concerns too, chief among them: time. “I was thinking, how is he ever going to get all this done? But he is a very organized person. I told him, if you’re going to do this, you still have to make time for the family,” she said. And he went forward with her blessing.

Fr. Schnipke had seen something in Charlie that made him confident the diaconate would be a good fit. “I had witnessed firsthand Charlie’s zeal for living and sharing the faith, his commitment and dedication to family, church and work were obvious, and he seemed to have the desire to discern more deeply what God may be asking him to do,” Fr. Schnipke said. “He was helping our youth to discern their calling in life, and it seems God was helping Charlie as well.”

It wasn’t easy. Studying for the diaconate meant traveling from his home in Celina to Cincinnati, 137 miles, every other weekend for three years. The stretch for Deacon Salway’s mind might have been even further. “So I showed up for the first week of class and they sent us down to the bookstore to get eight books that were five inches thick. They told us, ‘These are your books for the semester and you have to read them.’ Oh my goodness. They were going to try to reshape a stubborn old German’s mind. I knew I had this stubbornness in me; how do you reorganize and reform that?”

Judy supported his studying in the basement, and his cohort helped as well. He carpooled with four other diaconate candidates from the northern part of the Archdiocese. They got to Cincinnati early Saturday morning and went to classes; stayed overnight in the Athenaeum dorm rooms, got up the next morning for Mass and more classes on Sunday, arriving back home around 3 p.m.

“You’re constantly questioning, ‘God, am I where I’m supposed to be?’ There were times when I questioned if this was what I wanted to continue doing. But God always seems to have an answer that showed up either in something I had to read for class or a bible verse I heard at Mass on Sunday –something that would say to me, ‘keep going,’” Deacon Salway said.

So he kept going all the way to ordination, and now ministry at IC. He continually marvels at having been chosen for this vocation. He’s nobody special, he asserts—but he was called, as all are called, to lives of holiness, to lives of service.

He sees now that his birth into a family of service led to a life with Judy and his own kids, a life in the Church and a life in the Precious Blood family, and the ordained life, and that they are all intertwined, all for a particular purpose.

“It took some time for me to understand Precious Blood spirituality, but when I finally understood, lights came on and I realized it was something that had formed me from my very humble childhood,” he said. “Being included was something I struggled with when I was growing up. We often talk about how inclusive Christ was when he shed his Blood for all of us, especially for those on the fringes. It is now woven into my spirituality and my vocation as a deacon who serves God’s people, especially those on the fringes.

“I pray that my service reflects the way Christ intends for me. The needs of the poor, hungry, desolate and marginalized: that’s what he has called me to serve. And being associated with the Missionaries of the Precious Blood has enhanced and influenced my spirituality in a way that I would not have imagined.”