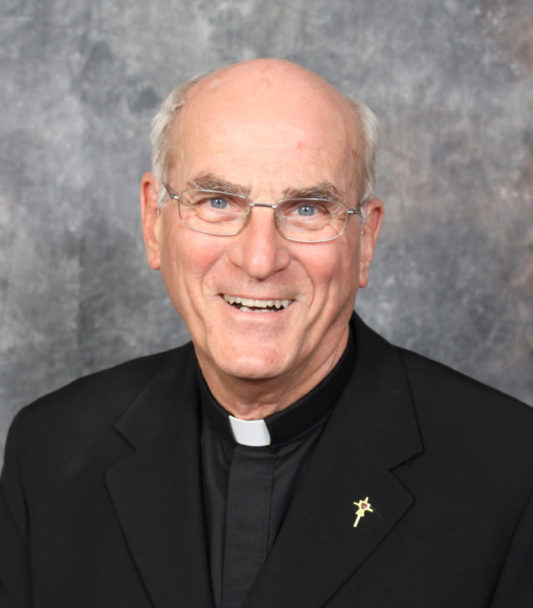 He was born on October 13, 1934 in Whiting, Ind., to John and Lillian (Spychalski) Kalicky, and grew up in the neighborhood of St. John the Baptist Church. He entered the Society in 1948 at Brunnerdale, the Missionaries’ former high school seminary, and was ordained on June 10, 1961 in Carthagena, Ohio.

Fr. Kalicky’s first assignment was to his home parish, St. John the Baptist in Whiting, Ind., from 1962-73. He then began his ministry with the congregation’s formation program at Saint Joseph’s College in Rensselaer, Ind. He was named special formation director in 1974, and at the same time was elected to the executive committee of the province. Fr. Kalicky was elected vice provincial director in 1978. Also that year he became the administrator of St. Adalbert Church in Dayton.

In 1981, Fr. Kalicky was named pastor of St. Anthony Church in Falls Church, Va. He was elected provincial director of the Cincinnati Province in 1982, and served two terms. After his time in leadership, he was appointed pastor of his home church, St. John the Baptist, in 1991, where he served until his retirement in 2014. That same year, then-Gov. Mike Pence named Fr. Kalicky a Sagamore of the Wabash, the highest honor the State of Indiana can bestow. Fr. Kalicky remained in Northwest Indiana during his retirement years, living in Highland, Ind., until his health failed earlier this year.

Fr. Kalicky was also a former member of the Board of Trustees of Calumet College of St. Joseph in Whiting.

He is survived by his sister and brother-in-law, Mary Kathleen (Matthew) Bukovac; several nieces and nephews, great-nieces and great-nephews.

He was preceded in death by a sister, Florence Gazda, and her husband, John; and a brother, Thomas Kalicky, and his wife, Cathy.

Dedicated and faithful, Fr. Kalicky served the Church and his Congregation well in all of his assignments, but his greatest joy was in parish ministry, particularly at his home parish. Fr. Kevin Scalf, C.PP.S., who served with him at St. John the Baptist, said that Fr. Kalicky had “a special way of bringing people back to the love, peace and joy that is authentically Jesus Christ.”

On his retirement, Fr. Kalicky said he was happy to lay aside the administrative chores of the large parish but missed the ministry. “I am a priest forever, and I surely love working with the people,” he said. “If you really want to be a pastor, you have to walk with the people and share their lives. That’s a special privilege. You feel their joys and their sadness. They know when you are sincere about it.”

A memorial Mass will be celebrated at St. John in Whiting on Tuesday, June 25 at 7 p.m.