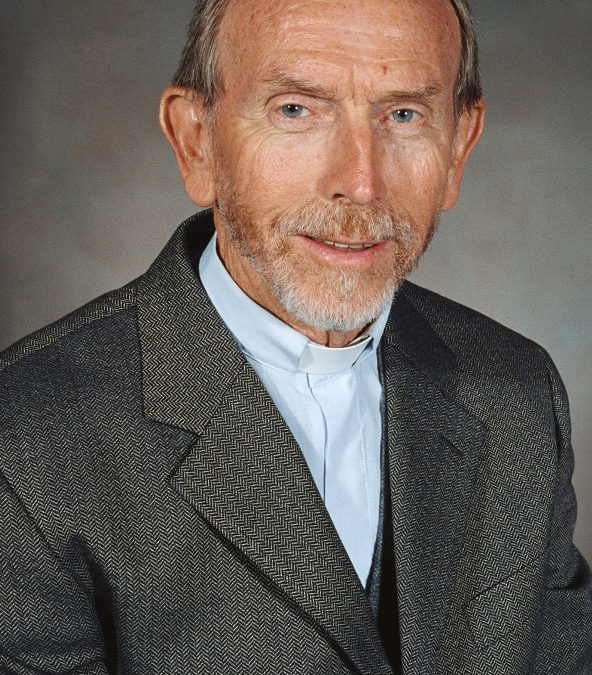 As a youth back in Indiana, I had aspirations of being pastor of my small hometown parish of some 80 families. Then through the Maryknoll Magazine I felt attracted to the missions and was accepted by the Missionaries of the Precious Blood. After ordination, I was assigned to teach in St. Anthony School in an urban neighborhood in Detroit, which was a very new and eye-opening experience.

Only after I had gotten my feet wet in that new experience, Fr. John Byrne, C.PP.S., the provincial director at that time, asked me to go to Spanish-language school in Lima, Peru in preparation for work in Santiago, Chile: two whole new worlds.

After nine years of enjoyable work there, I returned to the U.S. for family reasons. During my last of seven years of ministry in Dayton, I received the mission of forming and attending the Hispanic Catholic Mission Center for immigrants mainly from Mexico, Cuba and Puerto Rico, a fulfilling pastoral experience. Then another provincial director, Fr. John Kalicky, C.PP.S., asked me to consider going to Peru, which I accepted and where I spent 34 years and expected it to be my last change of country.

But lo and behold, another provincial director, Fr. Jeff Kirch, C.PP.S., was looking for a second member to be with Fr. Nino Calderón, C.PP.S., as a formator in Bogotá. He asked if I would consider being a “grandfather formator” there.

And now here I am, living in a community house with six seminarians. It has been a good experience. All are studying at the Jesuit University in Bogotá, the Javerviana. Jhon, Edwin, Javier, Oscar and Efren are aspiring to the priesthood and Nairo to the brotherhood.

For Holy Week, Palm Sunday through Easter Sunday, all, including Fr. Nino, were gone on missions. They formed three mission teams. One team, made up of Fr. Nino, Javier and Nairo, went way out into the jungle, driving eight hours by car then flying nearly an hour in a small plane and then going by boat another three hours. They went into an area that suffered for years under the control of the FARC revolutionary forces, but now is enjoying some relief and attention from the Church. The Missionaries were well received by the people and watched by the revolutionaries.

The second team, composed of the newly ordained Fr. Fredy Campos, C.PP.S., and seminarians Jhon and Efren, arrived at their mission destination by car some eight hours from Bogotá. From a central location, they ministered in three towns.

Finally, Edwin and Oscar went “up the wall” to form a team with Fr. Joe Deardorff, C.PP.S., as he ministers at Our Lady of the Alpes Parish as its new pastor.  I kept the home fires burning here in the house of formation, but also went “up the wall” each day to help with confessions and some Masses.

The first day on the way to the parish, I told the taxi driver that I wanted to go to up the mountain of the Alpes. He didn´t respond at first, but then asked, “Do you mean por la pared?” That means “up the wall.” The streets in that neighborhood are so, so steep, going up and, even more, coming down, it is like going “up the wall.”

So here I am, far from being pastor of an 80-family parish in Indiana, but always with new pastoral adventures.