A Presidential Visit to a C.PP.S. Parish 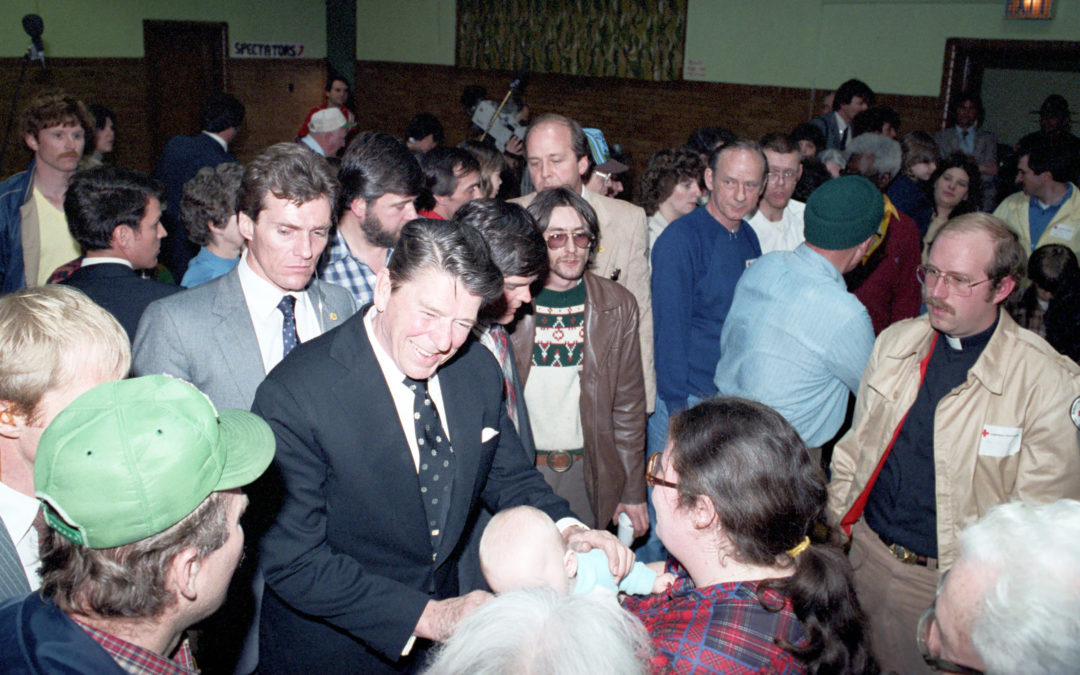 Here in the Midwest and elsewhere, we’ve lived through some wild weather this year. Fr. Rick Friebel, C.PP.S., recently was reminiscing about living through a flood when he was in ministry at Most Precious Blood Parish in Fort Wayne, Ind., in March 1982. That catastrophe drew a very special visitor – but we’ll let Fr. Rick tell the tale:

During the 1982 flood in Fort Wayne, all of the downtown was flooded. We’d had a large amount of snowfall that winter then a fast melt with rain, which contributed to a large-scale flood of the city’s three rivers: the St Mary and the St Joseph, which then forms the Maumee. All three rivers were well over the flood stage.

All three major news network anchors were here to broadcast the national news during the flood. The parish itself was not flooded, but it was the Red Cross site for those who had to leave their homes. Many individuals and families stayed overnight in the Precious Blood gym and made it their temporary home.

Fr. Jim Dugal, C.PP.S., was the pastor of Most Precious Blood at the time. On March 16, I was out all night with fellow parishioners, sand bagging in some areas of Fort Wayne. The next morning, Fr. Jim knocked on my door to let me know he would take the morning Mass for me.

I can still remember the morning I came down the stairs of the rectory and met our secretary, Helen Philips, at the bottom of the stairs. She said that the White House had called. She laughed in a bemused way at the thought that the president might be coming to our parish. Or maybe he might go instead to Pembrook Dike, where a lot of the youth of the city had built up a large sand bag levy that saved a good portion of the city. President Reagan was on his way back to Washington from a trip to Oklahoma City, and he diverted the plane to show his concern for the people of Fort Wayne. Once Secret Service agents started to show up at the parish, we knew for sure the President Ronald Reagan was coming to Most Precious Blood. The Secret Service took over the entire property, owning it for the safety of the President. Then the television and newspaper reporters began to show up. The presidential visit was beginning to take on an unbelievable presence. I remember one of the Secret Service agents asked me to take care of the press and to not let them into the gymnasium. (I could go freely in and out of the gym.) I was told that the press would be allowed to enter the school by way of the side door next to the rectory. I remember specifically telling reporters from the Fort Wayne-South Bend diocesan paper and The Sunday Visitor what was going to happen; I felt like I was giving them the scoop. I wanted them to have a better view from the balcony than the regular press when the president came in.

The size of the crowd of people was growing and growing on the streets around the school and church (Spring Street and Barthold Street). I was in the gym when the president came in with his entourage: Secret Service agents, Mayor Win Moses and Governor Orr of Indiana. By this time, the gym was full with parishioners who were volunteering with the Red Cross, those we hosted, a few other parishioners, Fr. Jim Dugal and myself. It was a remarkable event for the parish and for Fort Wayne.

Over the years, I somehow lost my photos of that visit. Finally, I wrote to the Ronald Reagan Library and they were kind enough to send me the photos, which I’m now sharing.