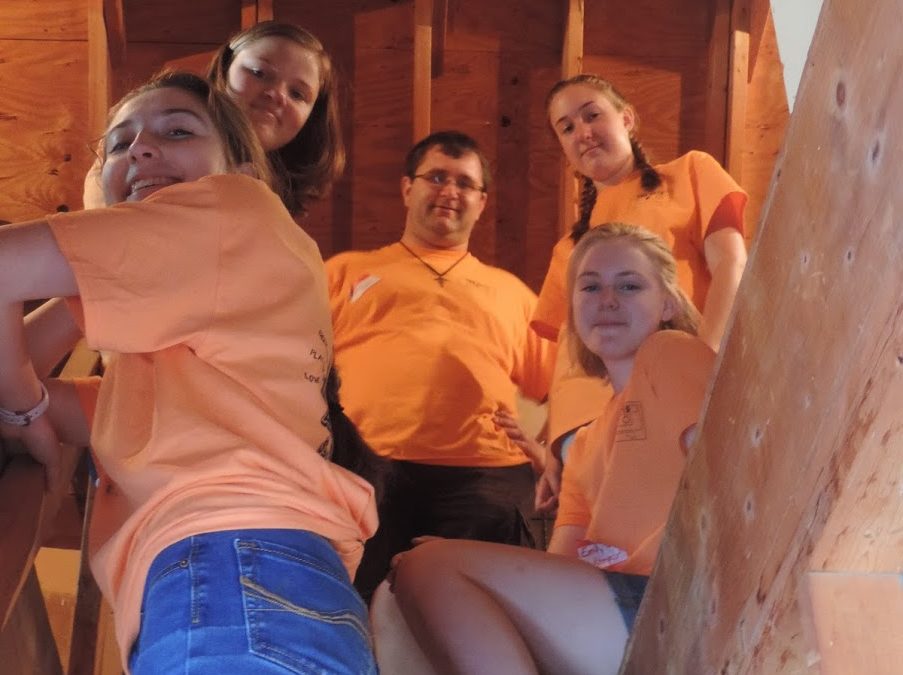 On Saturday, July 27, 40 young people from Dayton’s Region Seven Parishes fanned out in teams across the city to participate in YES, Youth Elect Service, as they pulled weeds, cleaned out attics and mowed lawns, all in Jesus’ name.

YES in Dayton was an offshoot of the same program organized in Putnam County, Ohio, by the youth ministers there. Transplanting it to Dayton was Fr. Matt Keller, C.PP.S., who is in ministry in the Region Seven parishes of St. Joseph, Emanuel and Holy Trinity. He’s seen YES inspire the youth and help the people of God in Putnam County, and he thought it could do similar great things in Dayton.

Which it did. The event, which started on Friday, July 26 with an orientation and prayer, emphasized both service and a sense of call. “We focused on ‘elect,’” Fr. Matt said. “We told the kids that anybody could have participated, but there were people who weren’t there because maybe they had a family obligation or a sporting event. So the ones who were here, they were chosen by God to be here that weekend.”

In Putnam County, YES includes an overnight stay. That was a little too ambitious for Dayton’s first year, Fr. Matt said, so the nearly 40 youth along with 20 adult volunteers came back to home base at Holy Trinity Parish on Saturday morning. They celebrated Mass to get them in the right mindset for a day of service.

With the support of his pastor, Fr. Angelo Anthony, C.PP.S., Fr. Matt had talked about YES from the pulpit long before the event. He encouraged parishioners to come forward with chores that the youth could do for them. At first, some may have been reluctant to ask for help, but he convinced them they would be offering a gift to the young volunteers, a chance to help others and experience the fulfillment that can bring.

Chore list in place, 15 locations scouted, and five work teams of youth and adults formed, the YES participants set out on Saturday in their bright orange T-shirts. The design was also a contribution from Putnam County, which was generous enough to share.

Fr. Matt traveled from group to group, from Centerville to Huber Heights, to check in on all the groups and work alongside the groups for a bit. He was inspired by what he saw. “At one house, the homeowners were elderly and couldn’t do all the yardwork themselves. They wanted some landscaping bricks leveled and gardens weeded,” he said. “When you bring seven or eight kids to a home, they can get a lot done in two hours.”

Homeowners supplied water and treats, and some donated to the program. All homeowners were given a photo of themselves along with the YES team that performed the chores. Fr. Matt hopes that happy memories were made by all.

“That was the most touching part of the whole day,” Fr. Matt said.

It was a great beginning to a new (or transplanted) program, he said. He’s grateful for the support from his fellow Missionaries and from the adult volunteers, especially Tanya Lee from Emmanuel, who made two trips to Putnam County to explore how the YES program worked there, as well as helped with a lot of the organization. Other volunteers included Lynda Middleton, Lori Lange, Karen Averback and Amy Rhode.

“My goal was to plant the seed for next year and piggyback off what Putnam County has done. I’d like to have all three parishes in the region trade around the hosting responsibilities, and get more and more people involved. If you plant the seed and run it well, I hope people will see that it’s a good thing.”

To see more photos from the day of YES, click here.