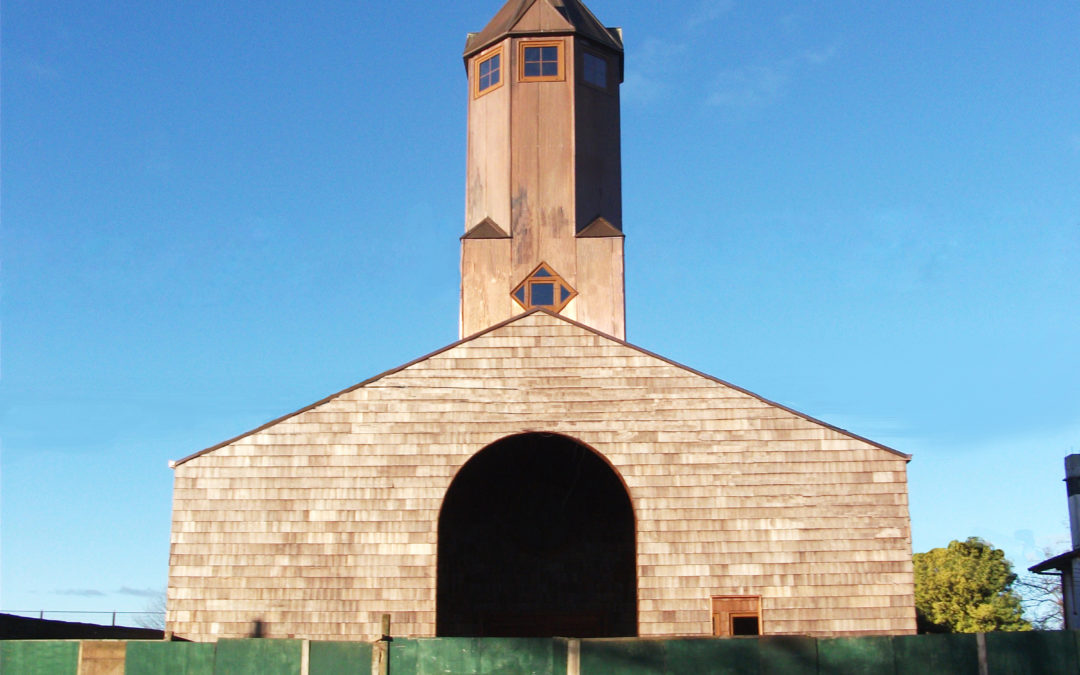 The people of San Sebastian Parish in Purranque, Chile, where an arson fire nearly destroyed the church three years ago, celebrated the Solemnity of the Precious Blood in their church. .

After three years, the exterior of the rebuilt church is nearly complete, said the pastor, Fr. Jorge Gomez, C.PP.S. The focus now turns to the interior of the church, where much work remains. “But we have been able to celebrate a few feast days in the church, and that has given the people the inspiration to continue,” he said.

The parish council recently decided to celebrate the 11:30 a.m. Mass each Sunday in the church, even as reconstruction continues. “To celebrate Mass in the church is hope-filled, because there’s a sense that there is progress in the project,” Fr. Gomez said.

Missionaries of the Precious Blood have been in ministry in Purranque, in southern Chile, for 70 years. The church is important to the faith community, but is also a significant historic and cultural landmark in the city of 20,000 people. Thousands of people take part in the Feast of San Sebastian, held in Purranque each January.

The church, which also sustained severe damage during earthquakes in 1958 and 1960, is being rebuilt to withstand earthquakes and includes many other improvements.

From the day after the arson fire, the people of Purranque have been supporting the rebuilding project, raising funds and keeping the faith. The project has also been supported by the 20 rural communities in the countryside around Purranque, which are part of the larger parish. They recognize San Sebastian as their mother church and are anxious to help with the reconstruction, said Fr. Gomez.

The project received a large boost last year with a $1.341 million anonymous donation. Donations are managed by the local San Sebastian Foundation. Parishioners have hosted fundraisers to help with the project as well. Local businesses and farmers have pitched in.

The reconstruction to date has cost an estimated $1.26 million (U.S.), Fr. Gomez said. He estimates that an additional $620,000 will be needed for work on the interior, which Fr. Gomez expects to be completed in 2020. Plans include a meeting area and a chapel at the front of the building. The interior will also have smoke and fire sensors, and fire-retardant paint.

The parish is now working on a plan for how to proceed on the interior. As it waited, the parish celebrated most of its Masses in a temporary chapel that the parishioners assembled in the parish hall. Feasts like Pentecost and Corpus Christi, which were celebrated in the church building, added impetus to the project.

Fr. Luis Briones, C.PP.S., the director of the Chilean Vicariate, expressed his thanks to all who have supported the project thus far. “Thank you to all the people who have collaborated on the reconstruction,” he said. “We express our gratitude in the name of the Missionaries of the Precious Blood, and the Missionaries in ministry in Purranque, and in the name of the whole community of Purranque. We all appreciate the patrimonial importance of the parish in that community.”

The project has been a challenge for Fr. Gomez, who was ordained in 2011. He was appointed pastor of San Sebastian around the time of the fire, and has had to learn a lot about all aspects of construction as the project goes on. Fr. Claudio Varas, C.PP.S., the parochial vicar, has been away from the  parish taking care of his mother, who is ill.

Fr. Gomez said he is grateful for the support he’s received from the members of the vicariate, including C.PP.S. Frs. Nicanor Azua, Omar Cerda and Diego Gallardo.

(To help fund the reconstruction of San Sebastian, donate through the province’s website, cpps-preciousblood.org/donate.)