The Art of Accompaniment 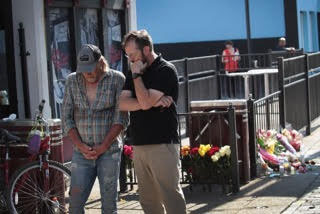 What comes to mind when you think of caregiving? Maybe it’s the work of a nurse in the hospital, or a deacon bringing communion to the homebound. You might think of something very practical, like bringing a meal, helping someone get dressed, checking blood pressure or driving an elderly person to an appointment. As a Stephen Ministry leader, I have learned that some of the greatest caregiving one can offer another is that of a listening ear. Everyone has a need to be heard.

Stephen Ministry is designed to bring two people together in a ministry of accompaniment during difficult periods in one’s life. Pope Francis has remarked in Evangelii Guadium that “the Church will have to initiate everyone—priests, religious and laity—into this ‘art of accompaniment,’ which teaches us to remove our sandals before the sacred ground of the other (cf. Ex 3:5) . . . reflecting our closeness and our compassionate gaze which heals, liberates and encourages growth in the Christian life” (169).

Stephen Ministries was founded in 1974 by the pastor of a Lutheran Church, Dr. Kenneth Haugk. He remarked, “I was fresh out of seminary and graduate school in clinical psychology; I had high hopes for providing pastoral care to people in my congregation and community. I felt called to the pastoral ministry—to bring Christ’s love to hurting people. But reality quickly set in: there were so many needs and only one of me.”

Fr. Jim Seibert, C.PP.S., pastor of three parishes in Northwest Dayton (St. Rita, St. Paul and Precious Blood) commented that, “I went through the Stephen Ministry training myself and know how Stephen Ministers can touch the lives of those who are hurting or struggling in a parish. There are plenty of parishioners in every parish who can benefit from this one-on-one Christian ministry. Our Stephen Ministers are some of the most sensitive, thoughtful, loving people I’ve worked with in my priesthood.”

Diane Huelsman, a Stephen Minister at St. Paul, commented that, “I have always enjoyed listening and talking to people but since the Stephen Ministry training I find myself asking more questions. A few days after the Oregon District mass shooting in Dayton, I received a call from a murder victim’s sister. She said the tragedy brought back all the feelings of a past murder she had experienced. We talked about sympathy, empathy, and being in an emotional pit. She hadn’t realized she was in the pit and thanked me for listening.”

Stephen Leader Barb Franz explained how Stephen Ministers change the atmosphere of the parish: “They are more aware of others and converse with people after Mass. They touch base and ask how things are going. Personally, since becoming a Stephen Minister, I focus more on the person I’m talking with; I’m more present to them. I listen much more than I ever did before.”

Linda Bryan, a Stephen Minister trainee, said, “I was in a department store looking at towels when a woman started to make conversation with me. In a matter of moments, she was sharing the changes happening in her life since her husband was injured and was now disabled.” Linda felt Stephen Ministry training had prepared her to be able to ask questions and give the woman an opportunity to express her frustrations and be heard.

One person receiving care from a Stephen Minister remarked, “I was feeling overwhelmed with my work

. . . having someone to simply listen about my anxieties has helped me tread through some rough waters. For this, I will be forever grateful.”

We are finding that creating a caring culture begins with the person in front of you, because all of us, at some point in our life, need to be heard.

Curtis Kneblick is the social justice director for the Catholic Communities of Northwest Dayton.