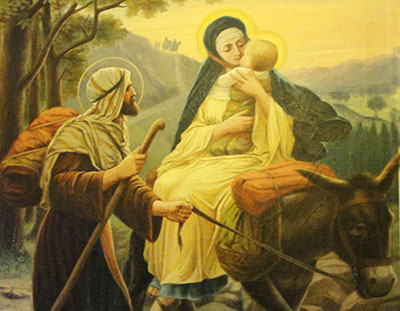 A word that grabs my attention from today’s gospel is “behold.”  In scripture, the word “behold” is another way of saying, be attentive, observe fully whatever is before you, for God is doing something important. In a dream, the angel of the Lord breaks into Joseph’s life saying “behold,” there is something important you need to know!

Sometime during the period of their betrothal, Joseph learns that Mary is pregnant. In the culture of his day, a woman could be stoned to death because of a pregnancy outside of marriage. Joseph wrestles with what to do.

There is no indication that Joseph reacted in an accusatory manner when he learned of the pregnancy. We sense that Joseph truly loves Mary and holds no ill will. He waited for the Lord, but God was silent. Joseph wants to protect her and so, humanly speaking, he believed the godly thing to do would be to divorce Mary quietly. It is in this mindset that the angel appears to Joseph in a dream and says, behold!  Notice, the Lord waits for Joseph to make his decision before revealing the mystery behind Mary’s pregnancy.

What do we do with our times of waiting when we have a challenging decision to make? Do we worry in fear, jump to conclusions, get angry, become cynical or fall into self-pity? Isn’t it true that the real test of a person’s courage is found when they wrestle with the inner trials that come their way, staying true to their beliefs when no one is looking or when they find themselves standing alone? Joseph is our model in challenging times such as these. He teaches us to behold the Lord.

One spiritual practice that I learned during a 30-day Ignatian retreat involves allowing God to behold me and then for me to behold God. In this prayer you first ask that God see you, hear you and know your feelings. Allow God to behold you with love and honor. Then, as God beholds you, your prayer is to be given the grace to behold God and follow God’s will; to see God, to hear God, to know the heart of God. This is something Joseph did very well.

Pope Francis began his papacy reflecting on the life of St. Joseph. He said, “As the spouse of Mary, Joseph is at her side in good times and bad, on the journey to Bethlehem for the census and in the anxious and joyful hours when she gave birth; amid the drama of the flight into Egypt and during the frantic search for their child in the Temple; and later in the day-to-day life of the home of Nazareth, in the workshop where he taught his trade to Jesus.” Joseph had every right to question or desire further information along the way, but he didn’t pressure God for anything more. The angel’s message was enough; his heart was set on doing God’s will no matter what that would cost him.

Acting in faith is the underlying message of Christmas. Our role models are Mary and Joseph, whose yes to God is unique to each. Mary’s yes is found in accepting God’s will that she would give birth to the Messiah, the Son of God. Joseph uses no words but willingly follows God’s command “to take Mary into his home as his wife.” As a “just man,” Joseph doesn’t doubt what God asks him to do. He obediently follows God’s plan and protects Mary and the child Jesus. This is why Joseph is the patron of the Universal Church, he continues to protect the mystical Body of Christ.

Today, may we follow the example of St. Joseph and pray through his intercession for a greater trust in God’s plan for our salvation and the courage to respond to that plan with the witness of our lives. Fr. Angelo Anthony, C.PP.S., is the pastor of the Dayton Region Seven parishes, which include Emmanuel, Holy Trinity and St. Joseph.