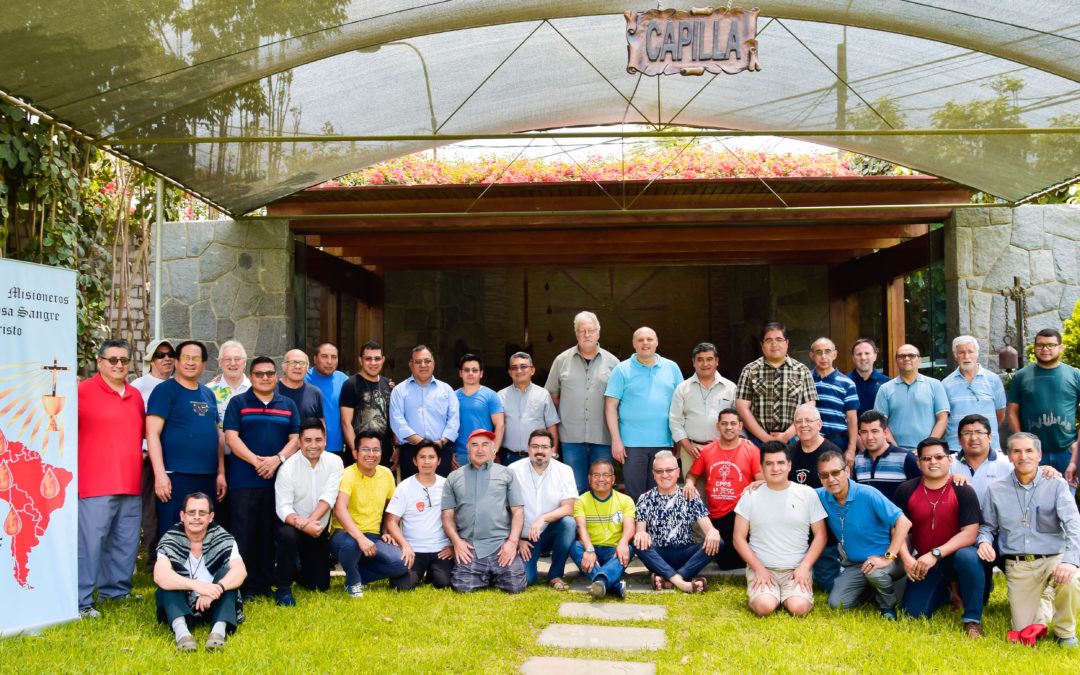 “There are boundaries that define our countries but there are no boundaries between us,” Fr. Maximo Mesia, C.PP.S., told the members of the new Latin American Province, who in January had elected him as their first provincial director. “We are all part of St. Gaspar’s dream and are to continue it. As a new province, we are no longer five units but are now united: we are one in the Blood of Christ.” Fr. Mesia made his remarks at the close of the liturgy celebrating the new province, on January 31 at San Francisco de Borja Parish in Lima, Peru. It was a happy and bracing occasion for the 42 members of the new province, its seminarians, lay associates and friends who filled the church, which was built by the Missionaries of the Precious Blood.

The Cincinnati Province sent its prayers and best wishes to the new province. Included in the new province are four units that were formerly part of the Cincinnati Province: the Chilean Vicariate, the Peruvian Mission, the Central American Mission (Guatemala) and the Colombian Mission ad expermentum. Also part of the new Latin American Province is the former Brazilian Vicariate.

“Over the past 70 years the American Province, Cincinnati Province, Vicariate of Chile, Peruvian Mission, Central American Mission, and Colombian Mission ad experimentum have journeyed together as we have sought to respond to the needs of the Church in Latin America. That commitment will not change. As brothers, we will continue to work to ensure that the dream of St. Gaspar continues into the future,” Fr. Kirch said in a message to the new province.

“The entire Cincinnati Province is holding you in prayer. . . . We have been richly blessed by our relationship with each of you and we pray that our relationship will be strengthened as you take this new step in the life of the Congregation.”

The Latin American Province held its first assembly at the Missionaries’ John Merlini Retreat Center in Chaclacayo, Peru. Chosen to serve in leadership with Fr. Mesia were:

Each of the five former units now becomes a district with its own councilor, who was elected by the members of his district. The province has appointed a provincial treasurer, Fr. Mauricio Alverez, C.PP.S.

During the Mass at the end of its assembly, Br. Juan Acuña, C.PP.S., the secretary general, read the decree of the erecting of the new province. With Bishop Lino Paniza of the Diocese of Carabayllo in attendance, Fr. Emanuele Lupi, C.PP.S., the moderator general, presided. Fr. Mesia concelebrated. In his homily, Fr. Lupi spoke of the four-year journey that led up to the celebration. “Approximately four years ago, a process began in Latin America to bring everyone together to reflect upon what we wanted our future to become. Being from different cultures, we discovered that we live in different contexts and have a diverse cultural heritage, yet we saw the need to see how it is possible for a man so old to be born again,” a reference to the words of Nicodemus relayed in the Gospel of John (3, 1–8).

“The Brazilian Vicariate just celebrated its 90th anniversary; the Chilean Vicariate has a history of 73 years; the Peruvian Mission has given service to this beloved land for 58 years; the Central American Mission has existed now for 45 years; and the Colombian Mission, the youngest of all, with its 15 years of service. As a whole, they now are discussing how to be reborn, how to harmonize the gifts that the Lord had given to each of its members.

“Tonight, you are witnessing the goal that we have achieved, a new Latin American Province. Although we know that on the one hand, this represents a goal, but in fact, it is the beginning of a new journey forward, of a story that will continue, rooted in the past but at the same time looking forward to something new.”