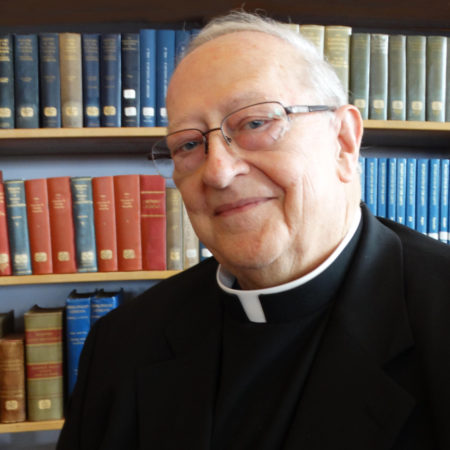 He was born on November 12, 1939, in Hammond, Ind., to Alphonse P. and Helen (Zaleski) Spilly. He entered the Missionaries of the Precious Blood in 1953 at Brunnerdale, the Missionaries’ former high school seminary near Canton, Ohio, and was ordained on June 3, 1967.

Throughout his more than 50 years as a priest, Fr. Spilly was involved in education ministry and communications for the wider Church.

After his ordination Fr. Spilly was named an instructor at Saint Joseph’s College in Rensselaer, Ind. In 1968, he began advanced studies at the University of Chicago and earned a doctorate in biblical studies in 1977.

In 1970, he was elected to the C.PP.S. senate. He was named director of the theologate and of formation in 1972. A scholar of the Old Testament, he also taught at the Catholic Theological Union in Chicago and at Mundelein Seminary in Mundelein, Ill.

In 2002, Fr. Spilly joined the faculty of Calumet College of Saint Joseph in Whiting, Ind., as an associate professor of religious studies. He chaired the newly established social justice committee while assisting at four parishes in Whiting.

In 2013, Fr. Spilly moved to Assumption Seminary in San Antonio, where he became a special assistant to Archbishop Gustavo García-Siller, M.Sp.S., of the Archdiocese of San Antonio.

Poor health forced his retirement to St. Charles Center, Carthagena, Ohio, in 2017, but he continued to work remotely with Archbishop Garcia-Siller, assisting him with communications.

An only child, Fr. Spilly was preceded in death by his parents. He was close to both of them throughout their lives; in his mother’s later years, Fr. Spilly lived with her in Whiting, Ind., and cared for her while still in ministry.

Fr. Spilly had a genial, gentle air that made everyone feel welcomed and valued. He was a renaissance man who loved classical music, books and photography. He was a gifted researcher and a clear writer, traits that served him well—and also the Church he served.

Above all, he was a man of words and a man of the Word. As a teacher and scholar, he led people of all backgrounds through the Scriptures guiding them through what was obviously familiar territory for him, and helping them see it in a new light, with new eyes. In declining health in his later years, his intellect remained sharp and he worked until the last to articulate a message of social justice and Christ’s healing and all-embracing love for the Church and world.