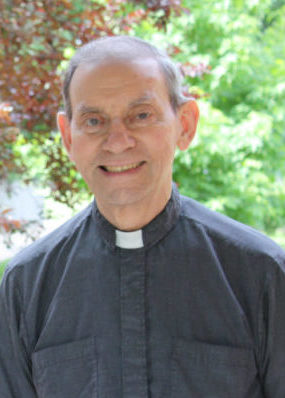 In 1961, Fr. Gilbert was appointed to education ministry at Saint Joseph’s College in Rensselaer, Ind., which is sponsored by the Missionaries of the Precious Blood. There he spent nearly five decades in ministry as a math professor at the college. During his career there, he served as chairman of the math department and was also on the college’s faculty athletic committee. He retired from teaching in 2016 and moved to St. Charles in 2017.

Preceded in death by his brother and sister-in-law, Hilary and Carol Gilbert, Fr. Gilbert was the last surviving member of his immediate family.

Fr. Gilbert loved his life as a priest, and he also loved Saint Joseph’s College. In fact, it was love at first sight, he once said. His older brother attended the college as well as some of his friends. When he went to visit, “as soon as I saw it, I fell in love.”

His parents, Italian immigrants who changed the family name from Gilberti to Gilbert, wanted both their sons to get a college education. They were in favor when Fr. Gilbert enrolled at the college that was to become his home for most of his adult life.

While there, he served with compassion and commitment. “I wasn’t brilliant at mathematics, but I was good at it,” said the priest, always self-deprecating. His students describe him as a man devoted to both of his vocations, the priesthood and education.

He was a favorite among the faculty and staff as well, presiding at a daily midday mass in a chapel on campus for as long as he was able—even when he had to proclaim the Gospel through a large magnifying glass.

Fr. Gilbert also helped out at parishes in the Gary Diocese and, for his Community, served several terms as district chair and the local C.PP.S. director at the college. For many years, he was the chaplain of Knights of Columbus Council 1881 in Rensselaer.

He also loved baseball, rooting for the White Sox as a boy; later in life he committed the apostasy of switching his allegiance at least in part to the Cubs. He played baseball in high school and was an excellent point guard on the school’s basketball team. “I was a hustler,” he said. “I had a knack of seeing who was open and feeding them the ball.” A teacher could be said to be a point guard too: seeing who is open and feeding them what they need. A priest, too.

A Mass of Christian Burial was celebrated on Thursday, October 22, at St. Charles Center, the V. Rev. Jeffrey Kirch, C.PP.S., provincial director, presiding. Fr. William Stang, C.PP.S., was the homilist. Due to health restrictions, the funeral was private. Burial followed in the Community cemetery.