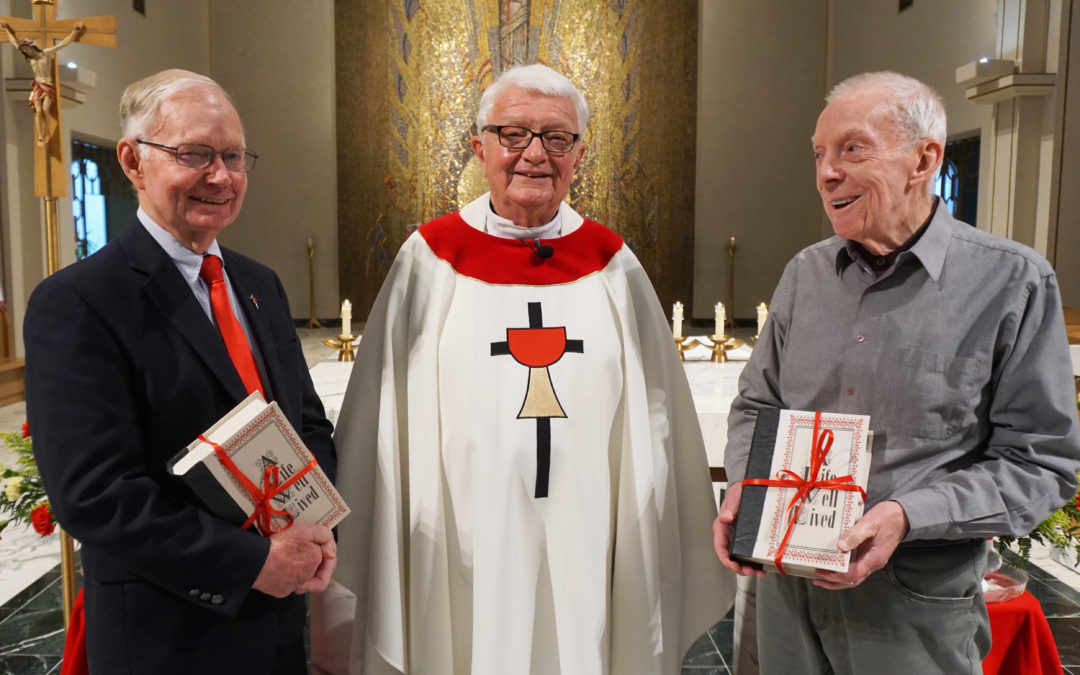 “St. Gaspar is a great role model for us in the way that he responded to the needs of the Church and the signs of the times,” said Fr. Tom Brenberger, C.PP.S., who presided at a Mass on the Solemnity of St. Gaspar, October 21 at St. Charles Center in Carthagena, Ohio. So too are the 2020 jubilarians great role models, Fr. Brenberger said at the conclusion of the Mass, as he called forth those who live at St. Charles: Br. Jerry Schulte, C.PP.S., celebrating 65 years as a religious brother, and Br. Charles McCafferty, C.PP.S., celebrating 50 years. They were presented with a package of greetings from Precious Blood people around the world, including Fr. Emanuele Lupi, C.PP.S., the moderator general.

All 2020 jubilarians, including Frs. Ken Pleiman (50 years); Don Davison and Gene Schnipke (40 years); and Br. Daryl Charron and Fr. David Matz (25 years) of the Kansas City Province, all received such a package. The 2020 jubilarians were denied a large Community celebration of their milestone anniversaries due to the coronavirus. The package that the Jubilarians received with their well wishes inside.

One 2020 jubilarian, Fr. Philip Gilbert, C.PP.S., died on October 15, just days before the celebration. His funeral was held at St. Charles the day after, on October 22. Fr. Brenberger said he would tuck the well wishes from the Precious Blood family into Fr. Gilbert’s casket.

Also honored at the October 21 Mass was Fr. Ken Schroeder, celebrating his 55th ordination anniversary this year, which Fr. Brenberger said was worth a round of applause. Also, it was his birthday.