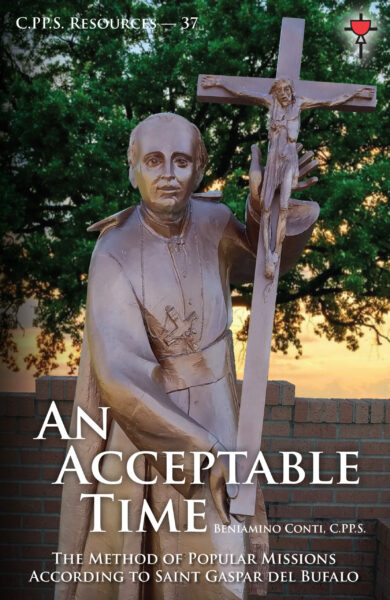 The ministry of preaching missions was central to our founder, St. Gaspar del Bufalo, and his earliest companions. A new C.PP.S. resource book explores the methods that St. Gaspar used when he came to town to reinvigorate the faith of the people of God.

C.PP.S. Resource 37, An Acceptable Time: The Method of Popular Missions According to Saint Gaspar del Bufalo, is the first English translation of a book by Fr. Beniamino Conti, C.PP.S. Translated by Fr. Jerome Stack, C.PP.S., the book also contains Gaspar’s own Method of the Missions, as well as guidelines for the associations aimed at continuing the work of the mission, an important part of the ministry of the mission houses.

St. Gaspar called his parish mission “a holy machine that runs like a clock.” He was not exaggerating. Gaspar outlined the preparations for the mission, how the Missionaries were to travel, and the various duties of the Missionaries and the lay people during the mission, which generally lasted two weeks. The schedule is amazingly detailed, although always subject to modification given local circumstances.

Gaspar’s sense of theater is evident; it is a trait he may have learned from his father, who was fond of staging shows. Gaspar commented that the mission needed to appeal to the emotions as well as to the intellect. Missions were not simply a series of sermons, but involved, for example, processions through the streets, the tolling of bells, the judicious use of music, and even the use of the discipline, a small whip that a Missionary would use on himself. His use of dramatic devices earned him the derision of some, who called him a “comedian.”

To assure that the fruits of the mission would endure and grow, Gaspar was careful to establish associations for the various groups in an area: men and women, older and younger, and the clergy. These would meet each month, ideally guided by a Missionary from a local mission house. It is not hard to see these as antecedents of the various flavors of Precious Blood lay associates, such as the Companions movement in the United States.

What shines through all of Gaspar’s writing on the topic of the mission is his zeal to bring people to a deep consciousness of God’s mercy and thus have a change of heart, a repentance that would lead to a new direction in life. Gaspar’s profound awareness of the spirituality of the Precious Blood motivated him to share the Lord’s merciful love with all.

An Acceptable Time: The Method of Popular Missions According to Saint Gaspar del Bufalo, is available for $15 from the Precious Blood Resource Center at St. Charles Center, 2860 US 127, Celina OH 45822-9533 or email mission@cpps-preciousblood.org.