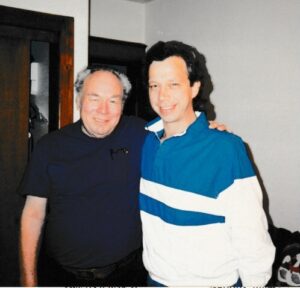 Joe Heidler was a quiet man by nature and a deep thinker. No snap decision maker he—except about food. That was one of the things he loved about Precious Blood gatherings, and potluck meals were his delight. Another delight was for people to draw him out about the topic for the gathering. He often said that it was being a Companion that taught him that he was able to form ideas and express opinions in a group. Speaking out was huge for someone well known for his quiet nature. He could not imagine doing that prior to the repeated encouragement that is part of the Companions’ vision statement: “Step out, stand up, speak clearly.”

Joe was proud of his 21 years in the Air Force. A humble man, he never accepted a rank above sergeant. He was active in the parishes he joined as the military moved him to many parts of the world, and he naturally welcomed all he met. Most of his family belong to the Baptist church and Joe became a Catholic—and quietly stood his ground. His family was generous in accepting Margaret, Joe’s first wife, a Catholic, and they were both very active as lay ministers.

After Margaret died, Joe chose another Catholic who actually worked for the Church! We were married in our Precious Blood parish by Fr. Mark Miller, C.PP.S.

He was so happy when Fr. Mark and Companion Don Wolff invited us to formation as Companions. He had no idea what that would mean and was eagerly seeking “tasks” as a Companion. He had earned a master’s degree in ministry from Loyola University and really wanted to be helpful in a Precious Blood parish.

Joe and I read the materials we were given, and Joe quietly went about to the hospitals and to the homebound, visiting, listening (his strong suit), taking Holy Communion and praying with them.

There were some who called him a “visiting angel,” and he would blush and beam with pleasure, hoping he was witnessing to Christ. Through the years of ups and downs, serious and difficult health problems, the members and Companions walked with us, prayed with and for us, encouraging, educating and sharing faith, hope and love. The day he died, he spoke up in a meeting of residents in the Veterans Home where he lived in his home town of Warrensburg, Mo. He asked for a change he thought necessary and moral, but it was unpopular. He was shouted down. He stuck to his opinion. People yelled at each other. Joe just stood at his walker, silent. He was wearing his Precious Blood insignia as he always did, around his neck on a chain.

Finally, the room quieted down. Joe spoke again, in his firm, clear, Precious Blood voice. A vote was called. Joe’s idea was approved and applauded.

Was that Gaspar cheering with us?

(Beth Heidler is a Companion with the group in Kansas City.)