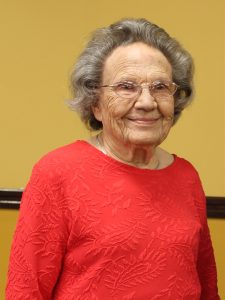 Born near St. Joseph, Mo., in 1915, Frances dedicated her life to education. After teaching elementary school in St. Joseph, she earned an M.A. and a Ph.D. in English, later serving as chair of the English department at Missouri Western State University.

Francis was a life-long member of St. Francis Xavier parish in St. Joseph. The parish, named for the patron of the Missionaries of the Precious Blood, has been served by Missionaries since its founding in 1890. Frances was already retired from university teaching, but active in the parish and her community when she was invited to become a Companion in 1991.

Frances writes movingly about her long journey to Precious Blood spirituality in The Wine Cellar, issue 14, 2003. From childhood on, she had a negative attitude about blood and did not want to know anything about its role in human life. She found devotion to the Sacred Heart appealing and delightful. Frances worried that becoming a Companion would be “casting the Sacred Heart aside.” At the same time, she was “sure that becoming a Companion would lead to my spiritual growth.”

She writes in her 2003 Wine Cellar piece that “our first missionary call comes in baptism,” and that being a Companion requires participating in the missionary endeavors of the community. A later Wine Cellar piece in issue 27, 2014, reflects Frances’ growth. She writes “I join the community in concern for the poor, in ecumenical outreach and in responding to the cry of the blood . . . I must honor the blood of life and humankind. I deplore euthanasia; I deplore capital punishment; I also deplore what amounts to capital punishment in a land in which it is sanctioned by the government: the willful taking of the life of an unborn child.”

Frances’ cover piece for the March 2011 issue of The New Wine Press, the Kansas City Province’s monthly magazine, is entitled “The Heart of Community.” Frances calls us to give equal attention to this third pillar of our Precious Blood life, drawing on her study of St. Gaspar’s writings. She says that “The love Gaspar desires for his followers was not the sentimental variety that fires St. Valentine’s Day; rather, it was an everyday love, blessed with such gifts as forbearance, self-sacrifice, humility, hospitality, and a sense of humor. Gaspar saw this love as a necessity, not only in the lifelong formation of Precious Blood members, but also as
an empowerment in their missionary endeavors. If the missionaries made their great love visible, as the new Christians did in the early days of the Church, the men and women who saw them would know that God is good.”

Frances credits Fr. James Urbanic, C.PP.S., who served as pastor at St. Francis Xavier, with her understanding that Precious Blood incorporated members and Companions are a family. Frances addresses Companions with several suggestions of ways “to grow in our sense of and participation in community.”

Through her work with Fr. Dien Truong, C.PP.S., who served at St. Francis Xavier in the summer of 1996 as a deacon, Frances came to a deeper experience of the Precious Blood family. Deacon Dien sought to improve his conversational and written English and to become a more effective preacher. Frances says that she found herself referring to “our” provincial rather than “your” provincial.

Although Frances lived and worked close to her birthplace throughout her life, she was a world traveler. On her journeys, she photographed both landscapes and people. Her book Art Along the Way captures the world as Frances saw it, with photos and commentary.

Frances says in her 2011 piece that “I have become a ‘new creation,’ made somewhat according to the specifications of St. Gaspar.”

With her prayers and example, so may we all.

(Maureen Lahiff is a Companion with the group in Alameda, Calif.)