Many Long and Fruitful Years of Ministry 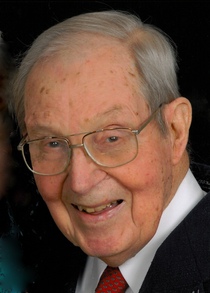 “This is a great book!” That’s one of the memories of (then Father) George Lubeley that I recall from my seminary days. He taught a course on Revelation and would frequently pull a book from his briefcase with that phrase. Books were a prominent theme in his life, and he was an avid reader until the end of his life.

George was born in 1919 in St. Louis, and was a member of the American Province, later of the Cincinnati Province. Along with three other C.PP.S. members, he was sent for advanced studies to the University of Fribourg in Switzerland shortly after World War II. He returned to the United States and spent the next 20 years teaching at Saint Joseph’s College and St. Charles Seminary.

In the late 1960s, he became convinced that the education of C.PP.S. seminarians would be better served at another institution or institutions with a stronger faculty and was an advocate for that position at the 1969 Cincinnati Province Assembly. St. Charles closed, and George became the director of formation at the Catholic Theological Union in Chicago.

George met the woman who was to become the love of his life in Chicago, and in 1974 he and Marie Weber were married. George continued to have contact with the Missionaries
of the Precious Blood, and he and Marie later became Companions.

Just as the first half of his life was spent in service to the C.PP.S., George continued to be engaged in service, especially with the elderly and people with mental illness. He received an MA in counseling from the University of New Hampshire, and held a number of positions involving social work with the elderly, eventually retiring from the State of New Hampshire’s department of human services, elder services divisions.
After retirement, he continued to serve as a volunteer in Putnam County, Ohio, where George and Marie made their home. George died in their home at the age of 96 in 2015.

George’s love for books, especially books on theology, meant that he amassed a great many volumes over the years, most of which he donated. The last time I saw George and Marie was in response to a request to evaluate those books he still had with a view to donating them to the C.PP.S. As I went through those books, I was struck by the many annotations in the margins, evidence that he had not skimmed the texts, but reflected on what he had read. He may have been actively involved in service, but continued to be nourished by what he read and by his active involvement in the church in Ottoville, Ohio.

I recall that many of us were surprised at his decision to leave our Congregation to marry, and I was aware that we would be losing a member of formidable intellect. At the time, I don’t think that we were aware of the long and fruitful ministry that lay ahead for George, not as a priest but as a committed lay person whose vocational discernment led him to embrace a different life of service.

In the context of the current discussions on the ordination of married men, I would say that George Lubeley was certainly a vir probatus, one of those laymen who would have been a wise and caring pastor. At the same time, he remains a witness of a life of service and dedication to the Lord who called him to some 70 years of service to the Congregation, to the Church, and to the world.