Outstanding in his Ministry to the C.PP.S. 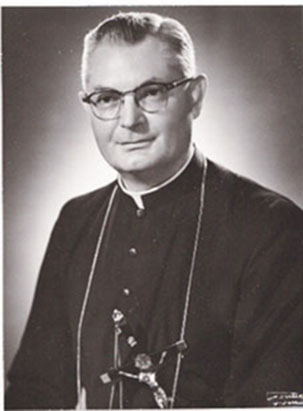 What a remarkable man! What a remarkable life! Born in Victoria, Kan., in 1909, Fr. Herbert Linenberger, C.PP.S., was truly a family man, so say his immediate relatives. Most people might not know that he loved music and played the harmonica and the accordion. He had a fantastic memory for names, as evidenced in his classroom days. He was a prolific letter writer, especially to his family.

He was a very kind man, and I can attest to this with an example from my own life. As rector of St. Charles Seminary, Fr. Linenberger drove me to my home (about 25 miles away) to visit my parents after I spent six weeks in the infirmary due to an infection. He wanted them to see that I was okay. (Only penicillin saved my life.)

As rector, he was also an instructor in canon law. He was absolutely the best of all the teachers at St. Charles. His classes were always alive and realistic since he taught from his own lived experiences as a priest at St. Anthony’s Church in Detroit, where he was associate pastor from 1935–1943. His real-life examples were invaluable for us.

Fr. “Herbie” received his doctorate in canon law in 1946, and I understand he wrote his dissertation in Latin. He was rector at St. Charles from 1953–1959, and he was elected moderator general, serving two terms from 1959–1971.

During his tenure as moderator general, he was outstanding in his ministry to the C.PP.S., including the canonization of St. Gaspar in 1954. He also met with St. John XXIII on several occasions.

After leaving Rome, he became chaplain at Tiffin Mercy Hospital. In 1978, he was called to anoint a dying man. As he left the hospital, he was crossing a slick and snowy road.

He slipped and was struck by a passing truck. He was 69 years old.

A great priest was dead, a man who never drew attention to himself in spite of his former positions and prestige. He was a “superstar” of a priest, one of many in the C.PP.S.

(Fr. Harry Brown is in ministry at the Sorrowful Mother Shrine in Bellevue, Ohio.)