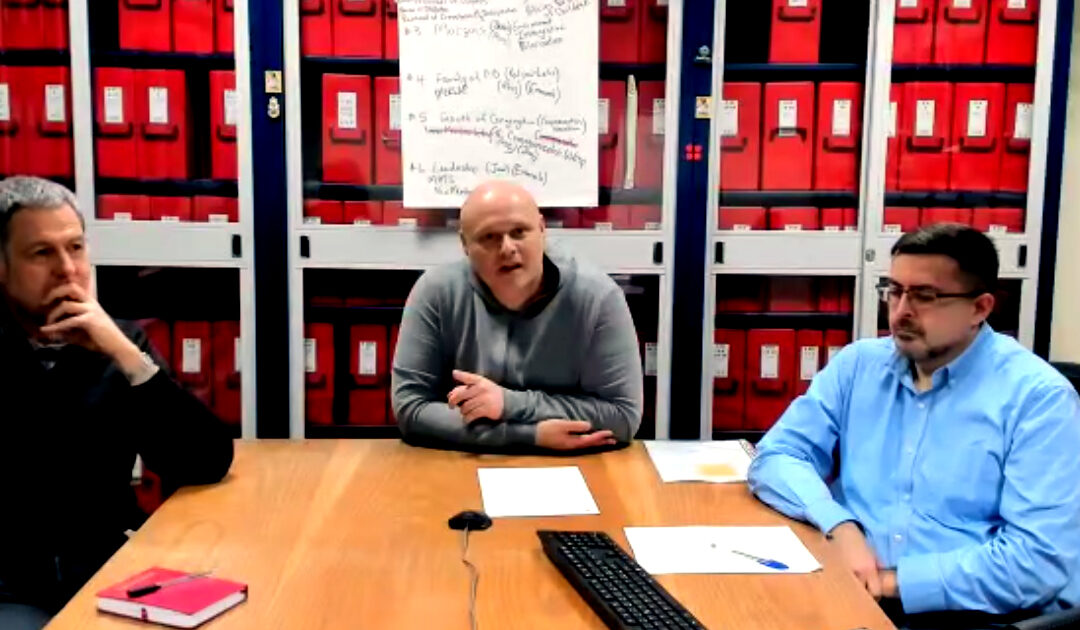 There’s an urgent need to pass along the message of the Precious Blood—and that message can and should be spread far and wide by both Missionaries and lay associates, said Fr. Emanuele Lupi, C.PP.S., moderator general.

Fr. Lupi, along with two other members of the general council, spoke with Companions (lay associates in the United States) recently via Zoom. In the expansive conversation, he spoke about the Congregation, past, present and future, and his own dreams for the Precious Blood family.

“I would like it if other people would join us, to be part of the dream,” he said. “My dream is that we can continue to make this (Precious Blood spirituality) known, and that those who come after us receive from us what we have received from those who came before. It is a moral obligation (to pass it along).

“Somebody welcomed me into this family; I have to welcome someone else into this family. In this way, we continue the dream, and the dream continues. But if it is to continue, it depends on us. So we must stay faithful, stay consistent, and make it better than we received it.”

Dozens of Companions and members participated in the conversation, which was coordinated by Companions Director Vicky Otto. Also participating were Br. Juan Acuña, C.PP.S., secretary general and treasurer, and Fr. Alois Schlachter, C.PP.S., a member of the general council who is from the Teutonic Province.

All three said they grew up among the Missionaries, Fr. Lupi in Italy, Fr. Schlachter in Germany and Br. Juan in Chile.

Fr. Lupi was educated by the Missionaries from a very early age. Ordained in 2001, he has ministered in, Peru, Tanzania and India. “Wherever I was, among the Missionaries I always felt at home. And that’s what makes me excited about my family—my family name is C.PP.S. My parents know how I feel, and they’re not jealous about it,” he said. “I really feel that I am married with this Congregation. I see the children growing. I see the brothers and sisters in Christ, Precious Blood men and women. And wherever they are, I think, ‘There is my house, there is my family.’”

Fr. Schlachter was born in Bavaria, Germany, near the border of Austria and Switzerland. He was raised in a diocesan parish, but there was a C.PP.S. mission house nearby, and he was baptized by a

“Perhaps this is a link to how you feel as Companions,” he said. “It’s something we have experienced from the beginning of our Congregation, when we were diocesan priests living together. But we knew we also had a different vocation. My first vocation is to be a Missionary of the Precious Blood. And I am glad for that. My second vocation is to be a priest. And I am glad for that.”

Br. Juan said he also considered being a Missionary, but was not sure he was being called to the priesthood. Then while working at the generalate on its website, he met Br. Tom Bohman, C.PP.S., in Rome for a general assembly. “He was the first religious brother I met, and it triggered my curiosity. For me, the idea of being a brother started right here in this house,” the generalate.

Br. Juan was the first brother elected to serve on the general council. Trained as a civil engineer, he hopes he can be an example for other young professionals discerning a religious vocation. Why not consider life as a religious brother and a Missionary of the Precious Blood?

“I would love to see our Community growing,” he said. “That’s my dream, to see the whole Precious Blood family flourishing. I’m convinced that our charism is very relevant for the world today. We have something to give to the world with our spirituality. It’s our responsibility to share that gift. I hope that if we do that work, our Community will flourish. It’s work we all can do—we’re all Precious Blood people, called to share our charism.”