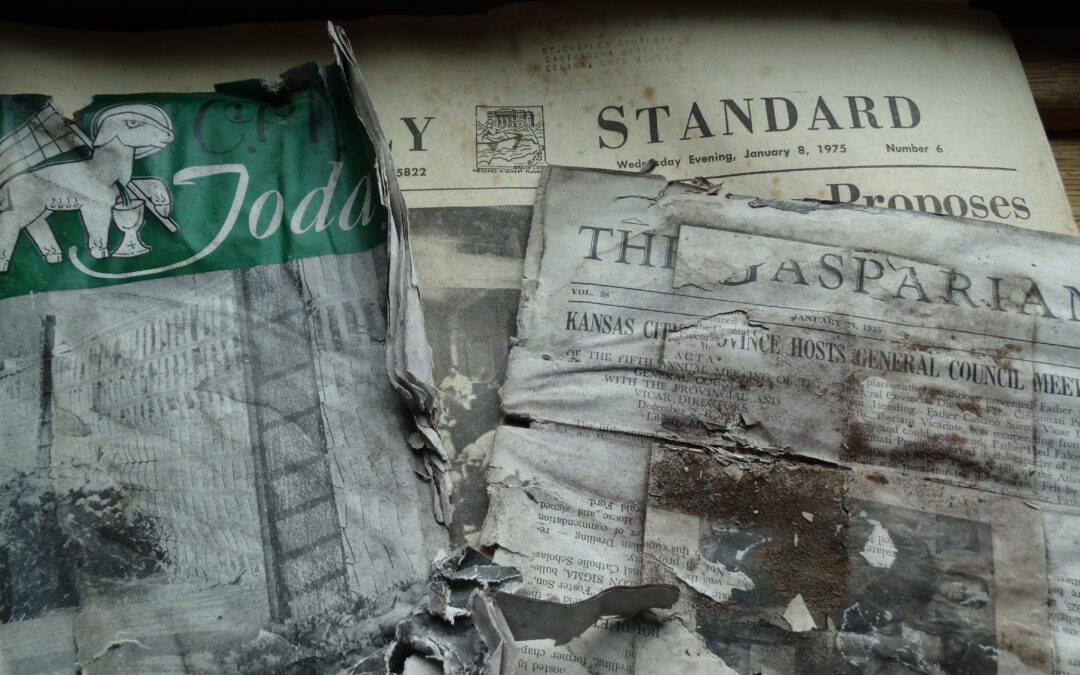 While crews were working on replacing the windows in St. Charles Center’s main building (read more about the window project), they came upon several curious handwritten clues in the frames of the main-floor windows. “You’re getting closer,” or “You’re almost there.”

What they eventually found, in the northernmost window on the east side of the main hall, was a sort of time capsule, a small collection of gifts and memorabilia left by the St. Charles crew that had replaced the windows in the 1970s.

There were newspapers, cartoons, C.PP.S. publications, a letter from the crew, and a little bottle of homemade wine by Don Hummel labeled “This bottle of vintage wine has been placed in this window by the Powerhouse crew for the enjoyment of whoever finds it, in the year of our Lord 1973.”

Don Hummel was a longtime employee at St. Charles, who worked in the powerhouse and around the main building and anywhere he was needed. He and his co-worker, Alex Koesters, were geniuses who could fix anything, said Alan Rettig, a former C.PP.S. brother, later ordained a priest, who along with Br. August Kruck, C.PP.S., worked alongside them to replace the windows.

Rettig remembers the day they placed the gifts into the window frame. “That newspaper is from the day the last window went in,” he said.

He also remembers the project, a long slog completed around other chores that the crew also had at St. Charles. Working laboriously, they had to take out each of the main building’s original wooden windows. “The main building was constructed in 1922. The windows that were put in were the windows of the day, wooden-framed, double-hung windows that were raised and lowered manually, kept in balance by cast-iron weights inside the window,” he said.

They were replaced with “the best commercial aluminum-framed windows of that time,” he said, They were shipped from Minnesota to St. Charles in a 70-foot semi trailer.

“The windows showed up right after benediction one night,” Rettig said. “Every able-bodied brother helped unload the truck.”

They didn’t have the lifts and other equipment available to the 21st century crew, so “we couldn’t put them in when it was raining or zero degrees outside,” he said. “We worked on the inside. We had no crane, no bucket trucks, no scaffolding. To set up scaffolding would have taken us three times as long.”

They set up a workshop in the basement. “The trim had to be cut very carefully and exactly, so that when you slid the window in, the trim was tight all the way around the limestone sill and frame of the building,” he said. “Assembly started in the locker room in the basement. Alex worked in there. Br. Gus was an expert carpenter and cabinet maker.  He did the frame rebuild to enclose the opening where the weights had been. This solidified the building frame to ensure a good fit. Don and I did the installation.”

If things were humming, they could do three windows a day. “The most we ever put in was seven in one day, but that was on the basement floor where we could stand on the grass and work from the inside and the outside,” he said.

The windows were “A-1,” he said, but the Community got the wood for the trim from Mersman Tables Co., a furniture manufacturer in nearby Celina. “They had a load of wood that had been trimmed from their furniture stock that they could not use. Instead of sending it to the landfill, we took it off their hands,” he said. “It was a win-win.”

The men worked well together and grew close through the project, Rettig said. The crew fell into a rhythm and the crew had fun. “’Well, I cut it off twice and it’s still too short’—that was a Don Hummelism,” he said.

It was a marvel to work on the main building, he added. “I’ve stood on the main lane looking at that building, and think about how a lot of the structural brick was kilned from clay on the property. And how did they lift all those huge limestone pieces? There had to be cranes and winches and very skilled masons to get them into place,” he said. “That building is put together perfectly. You can put a square on it, and it’s straight.”

He also marvels at the gifts given by God to the men on the crew. “Alex and Don—what they did for the Community was amazing. Many of the lay people who have served our Community are really saints,” he said. “It was a privilege to work with them. Between them, they could fix anything and I learned so much from them and the C.PP.S. brothers. To this day, when I get stumped on a project, I’ll say, ‘Okay, Don, okay, Alex, teach me something,’” he said. “I’m a firm believer in the communion of saints. We have saints in heaven who are watching out for us. All we have to do is tap into them.”

Fr. Paul Wohlwend, C.PP.S., who lives at our St. Charles Center in Carthagena, Ohio, chronicles the projects at the nearly 100-year-old building with his trusty camera.