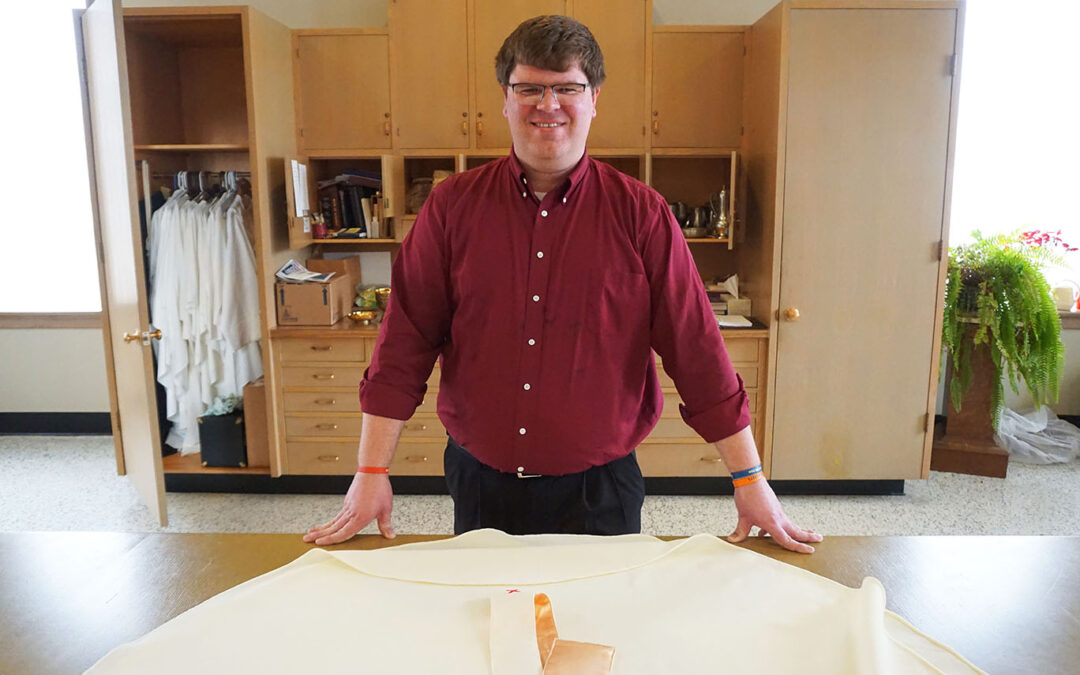 From the view from the pew, a Mass is supposed to flow. Liturgy of the Word, Liturgy of the Eucharist, from procession to recession, it should be a seamless garment.

But it unfolds that way usually only with planning and practice. And when there’s a new guy on the job, no one wants the liturgy to break down.

That’s why candidates for ordination to the priesthood, such as Gregory John Evers, C.PP.S., take a class in presiding as they near the end of their advanced formation.

Greg has been enrolled in the class, taught by Fr. Richard Fragomeni, at Catholic Theological Union since last fall. In February, Greg “presided” at a practice mass at Immaculate Conception Church in Celina, Ohio, where he spent part of his special formation.

Greg’s family, friends and a few folks from the parish were invited to be the congregation. Greg was front and center, vested and ready, exactly as an ordained priest would be at an authentic Mass.

“People asked me how it felt. I told them the worst part for me was sitting in the sacristy waiting to step out in the sanctuary and get started,” he said. “Once we were ready to process toward the sanctuary as a group, my nerves went away.”

The class had him well prepared. “Starting last fall, we went through all of the Roman Missal,” he said. Students went through various practice sessions, learning about the art of presiding.

“Our professor told us it’s really important to do one thing at a time,” one turn, one movement, one prayer. “Sometimes, a priest will start the preface leading into the Eucharistic prayer when they’re turning the pages to get to the next part. Our professor told us not to try to do two or three things at one time, because if you lose your place, it takes people out of the flow.”

He had been practicing the parts of the Mass on his own, when he had the time, at San Felice House in Chicago, where he lives with Community members. “When I had some down time, I’d go into our chapel at the house and go through the Missal. I’d go through the introductory rites or through the liturgy of the Eucharist. It was weird to practice in a space all by myself. It felt a lot different to do it in front of people.”

Greg said it took him about four hours to compose his homily, not all in one sitting. His professor had told the practice presiders to prepare a homily as if it was to be delivered at their first Mass after ordination. “I try not to be long-winded in preaching, seven to 10 minutes is plenty,” Greg said.

Greg preached about the circles that support us in our journey of faith: family, friends, Community, classmates, wider and wider. “As we widen the circles of our own lives, the people we meet all have an impact on us, and shape us into the people that we become,” he said. “I feel like the congregation was hearing my message. People came up to me afterward and commented on it.”

Greg’s class at CTU offers other practice presiding opportunities. The class was divided into groups and assigned a particular rite, such as a wedding or funeral Mass. Greg’s group drew the wedding assignment, and Greg was the presider. Volunteers from the class served as bride and groom, so Greg joked that he had to be the presider, and not a classmate who was already ordained a deacon, so that they wouldn’t accidentally marry the volunteer couple.

Greg feels he has learned a lot through the class, with more learning to go. At the beginning of the term, the professor told the students that “aside from the preaching class, this is probably going to be one of the most important classes we would ever take. This is something you’ll be doing every single day for the rest of your life. So it’s important for us to understand how to use the books, and what liturgical options are available, so you can enliven the liturgical experience that people have, and help them find God in their daily lives.”