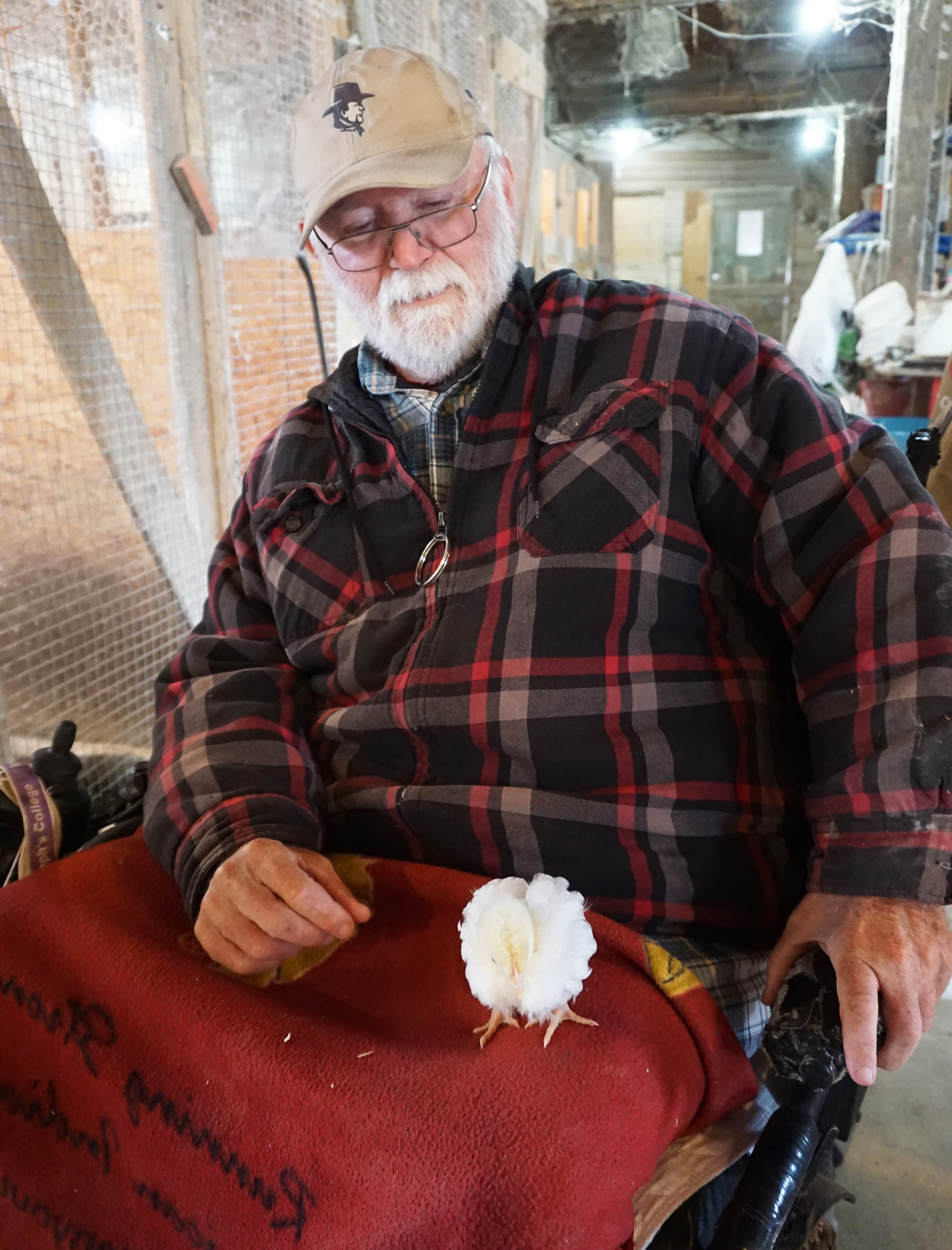 He talks to his birds as he moves up and down the center aisle of the chicken house at St. Charles Center. “Settle down,” he’ll say to one little flock, “I’m coming, I’m coming,” to another. “Oh, you’re showing off,” to a rooster standing as tall and proud as a peacock (and he also talks to his peacocks). The birds, as varied and magnificent as anything in God’s creation, turn to him and listen.

Brother Paul Chase, C.PP.S., has been caring for birds at St. Charles, in Carthagena, Ohio, for more than 50 years. His hens lay eggs, and he sells those eggs to St. Charles’ neighbors and others who travel for miles to get them, but the eggs are almost beside the point. Brother Paul raises special varieties of chickens and turkeys for people who exhibit them at poultry shows, for 4-H kids who want to take poultry projects to the fair, and for backyard enthusiasts who want to populate their own chicken coops.

He wants them all to enjoy his healthy, happy, beautiful birds. 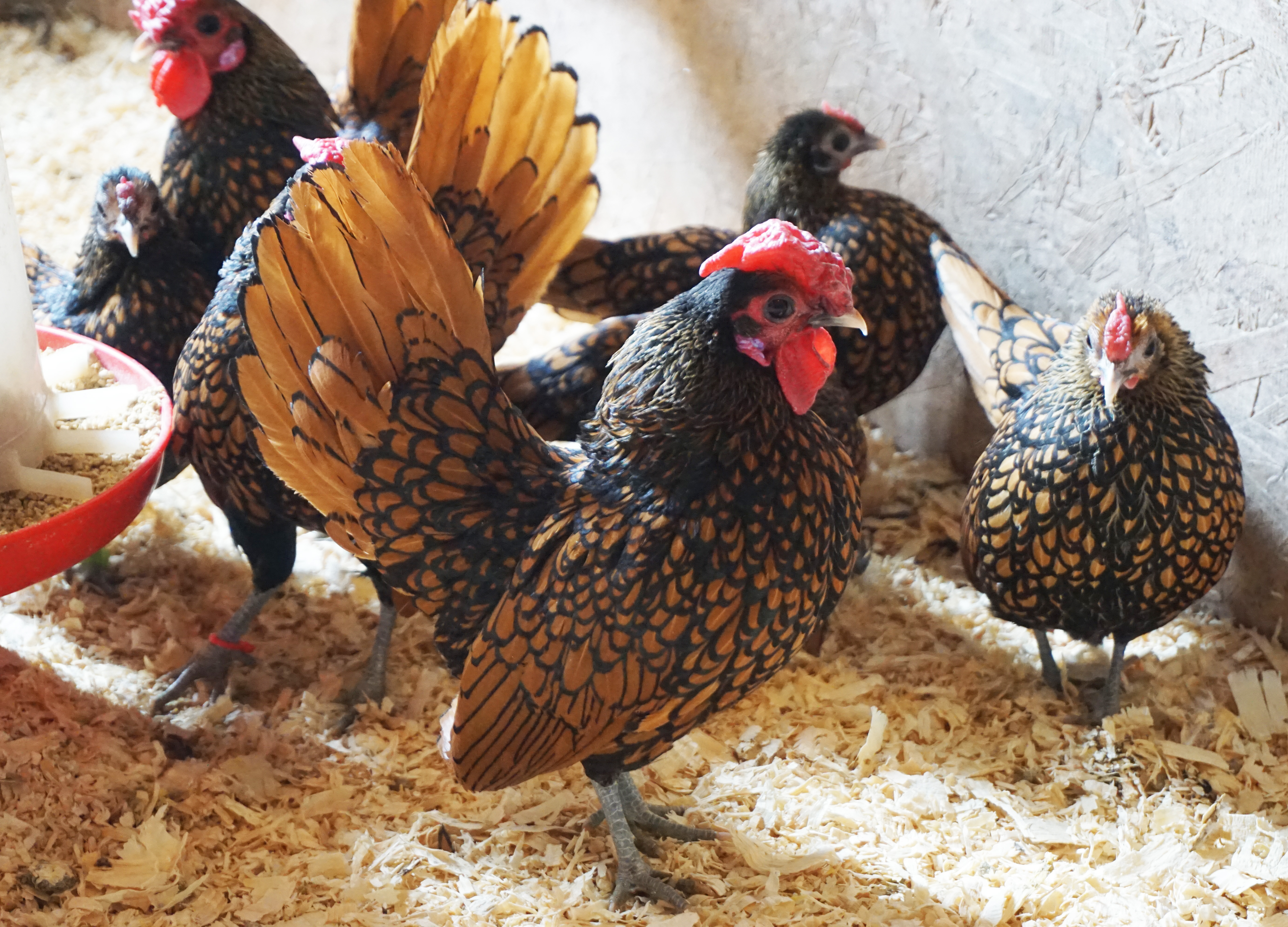 “These are my favorites,” he says, as he stops by a pen of Golden Seabright hens and a rooster, their feathers outlined in a pattern that looks like amber stained glass.

“This one’s my favorite,” he says at a pen that contains a few Frizzled Cochin roosters, their fluffy feathers moving about in the air current. He has pens of newly hatched chicks, pens of chicks that are a little further along in their development, pens of Golden Comet hens that will work well for people who are just starting out in the hen-and-egg business. They are docile, not demanding, easy to work with. Brother Paul works hard to match his poultry with his people.

He knows poultry people from all across the United States, and they come to him for birds, for advice or just to talk chickens. With the help of his friend and neighbor, Tom Staugler, he brings birds to auctions and sales.

He’s been around livestock and poultry all his life. Brother Paul was born to a farm family in Fairbank (“no S,” he says), Iowa. There, he was a happy 4-H’er himself, showing livestock at the county Fair. “My dad was the assistant 4-H leader,” he said.

When he sensed as a young adult that God was calling him to the consecrated life as a religious brother, he went first to the Glenmary Home Missioners. He was with them for a while, but they helped him discern that he might fit in better with the Missionaries of the Precious Blood. “They told me, ‘They have cows,’” he said.

Indeed they did. Brother Paul Chase, definitively incorporated as a C.PP.S. brother in 1966, helped out with the Missionaries’ famed Brown Swiss dairy herd. “I worked with Brother Bernie Barga,” he said. “He was my first boss—and a great man.”

Brother Paul found that he was best with birds. He loves his life in the poultry barn, among his flock. One might say he knows his flock, and his flock knows him. He’s familiar with and observant of every detail in the barn. “There’s the UPS truck coming through,” he said, listening to a vehicle coming through the barnyard one Tuesday afternoon. Then, listening more closely, “No, that’s Mike (Mike Hemmelgarn, maintenance supervisor at St. Charles) coming back from taking a load to the recycling center.” 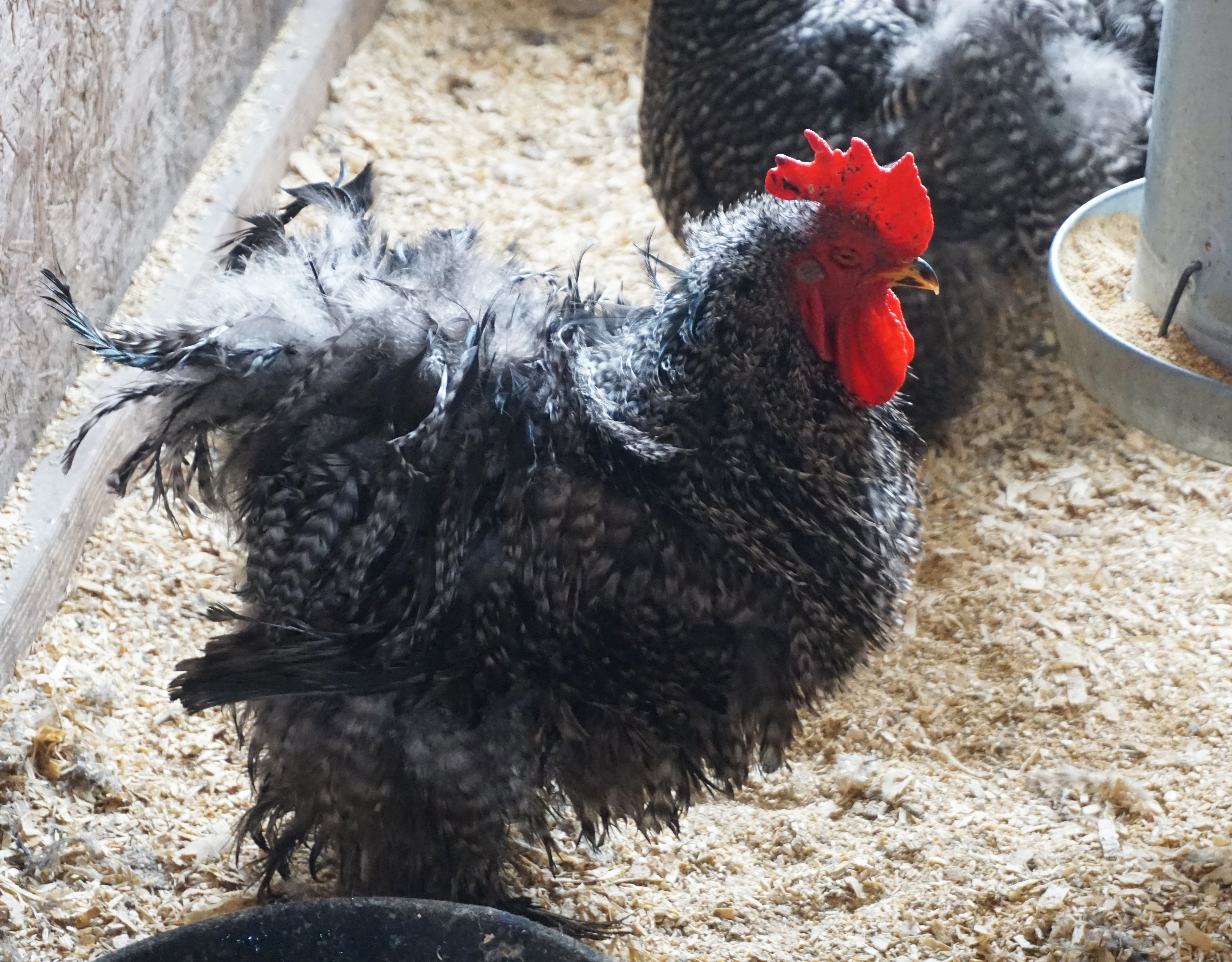 A Frizzle Cochin rooster, another of Brother Paul’s favorite varieties.Brother Paul and Tom keep their eye on trends at poultry shows, and raise varieties accordingly. “You can’t raise every variety,” he said. Cochins are popular right now, so they raise Cochins, among other varieties.

He also keeps learning. He keeps books on poultry in a wooden filing cabinet in the barn, among them the book of perfection, a gold-lettered guide to how the perfect example of each variety should look and act. He reads up on poultry care, even after all these years.

“You can never learn enough,” he said. “And I learn a lot from other people who raise poultry.”

When he’s not in the barn, he is out and about in his mobility scooter, policing the expansive grounds at St. Charles. He picks up sticks and pinecones ahead of the mowing crew. He picks up trash from the highway. “You can’t believe how much trash people throw out,” he said.

He visits his peacocks, which live in a barn on the far side of one of St. Charles’ lakes. He inherited them from Fr. Albert Gerhardstein, C.PP.S., who died in 1980. “They’re just beautiful,” he said. “How could you resist?”

He is accompanied along the way by a cat he calls Dog, because of her tendency to follow him everywhere he goes. “She likes to walk on my right side,” he said.

Dog is the only creature he has named. He does not name his chickens. He has a farmer’s practicality, a farmer’s pragmatic world view. And there are a lot of chickens.

No names, which they do not need—but his chickens and turkeys and peacocks have everything else they need to live a happy life in the barn until someday, perhaps, they are thrust onto the national stage as a champion.

“Some people carry their birds around on their shoulders. I haven’t gone that far,” he said. Yet he sees in his daily life in the chicken house an echo of St. Francis, who loved all of creation. “Being around them, there are some that you really like.” 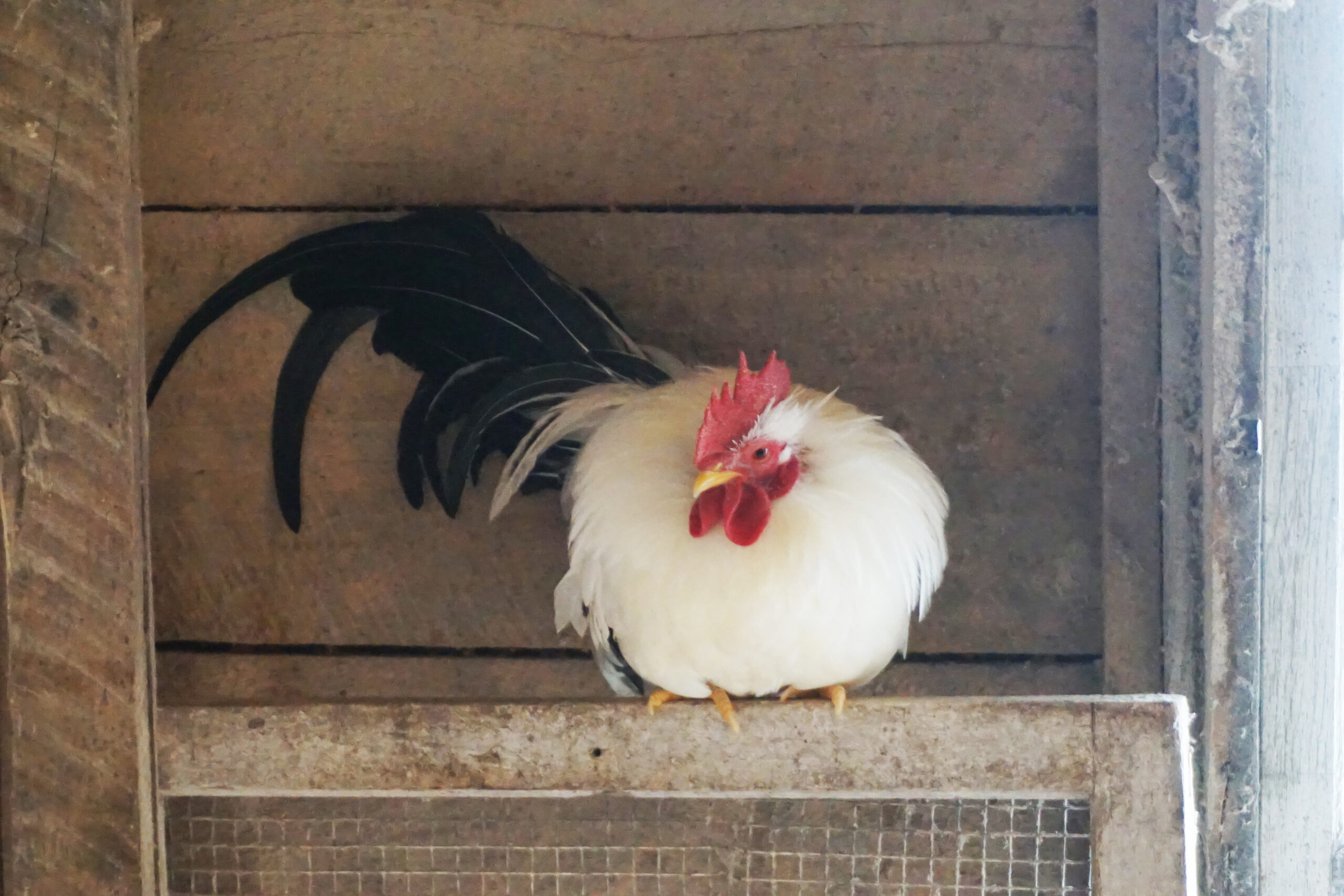 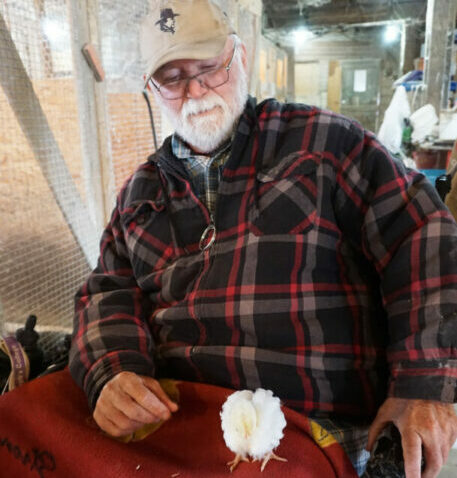 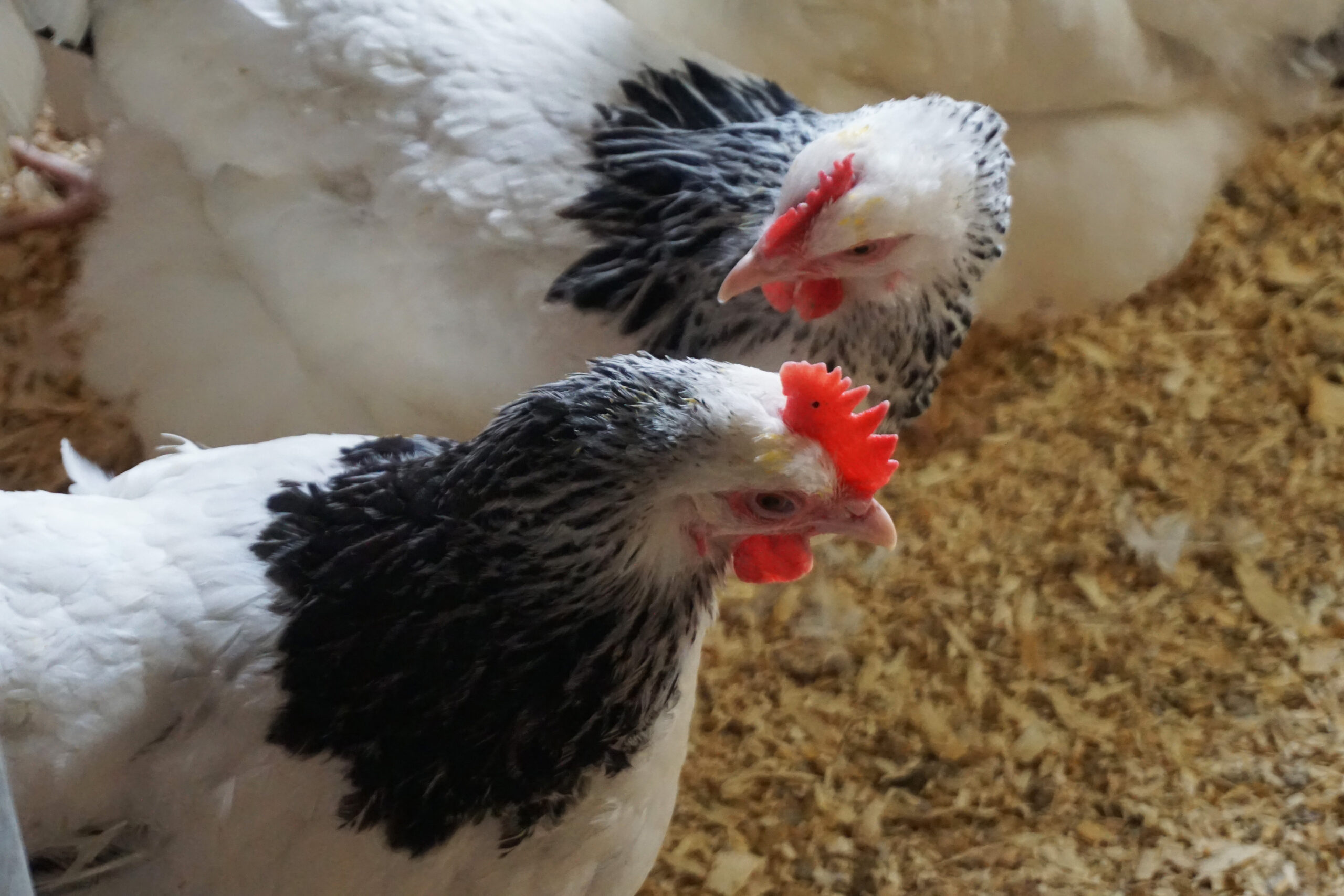 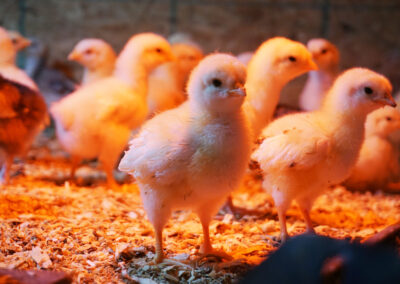 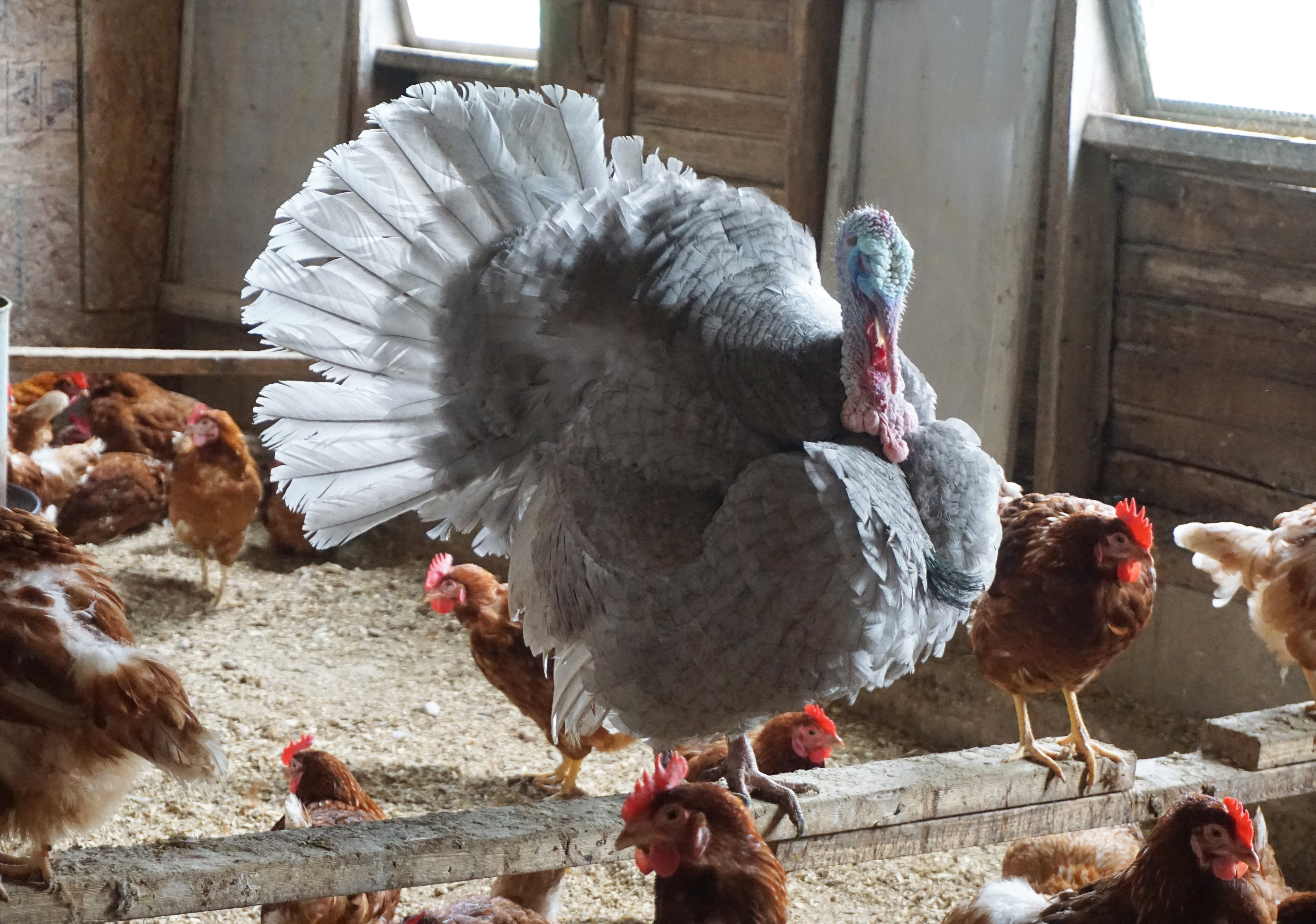 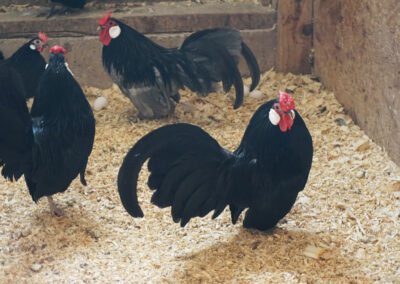 A Black Rose Comb rooster shows off his form.

A Frizzle Cochin rooster, another of Brother Paul’s favorite varieties. 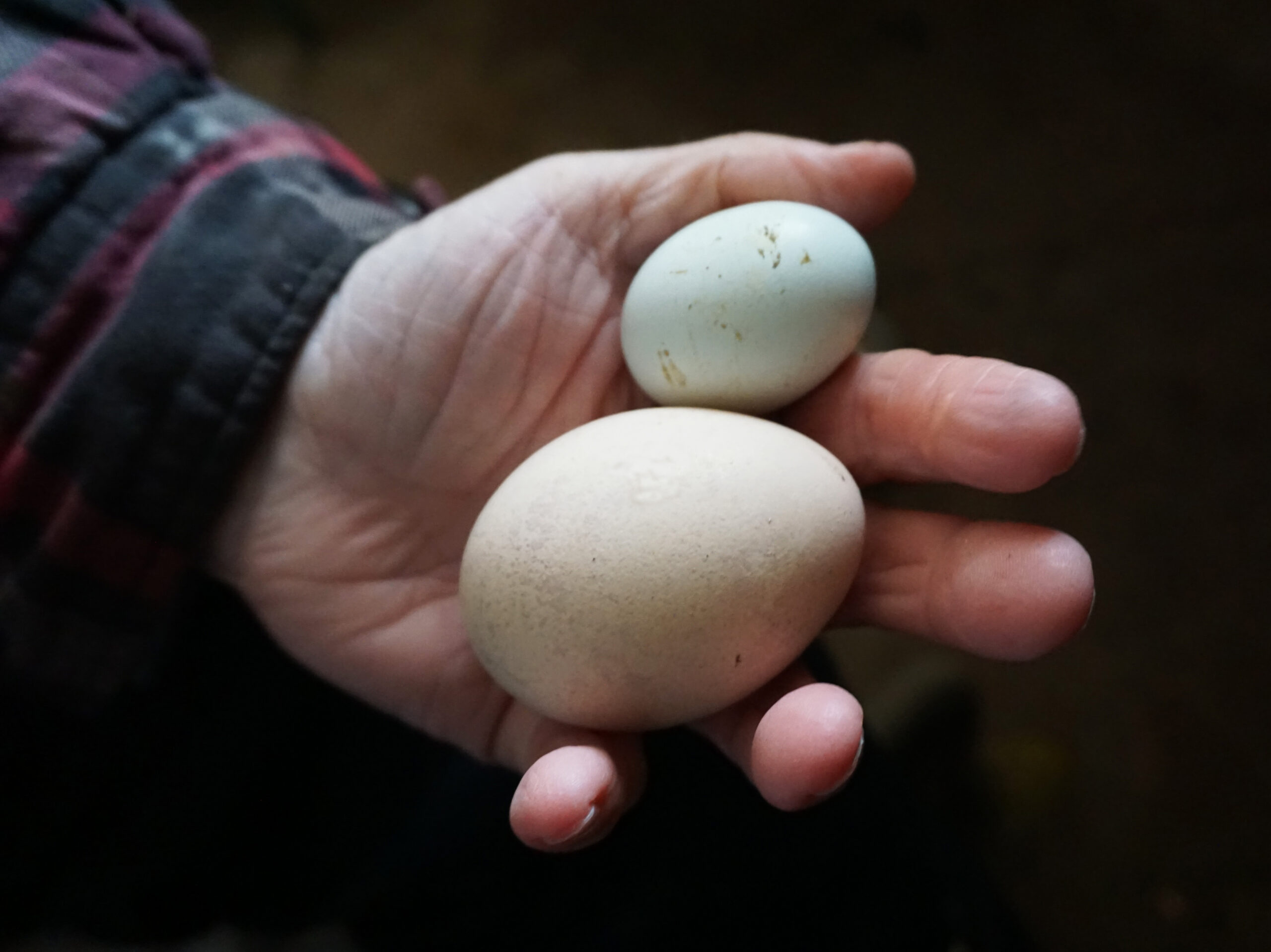 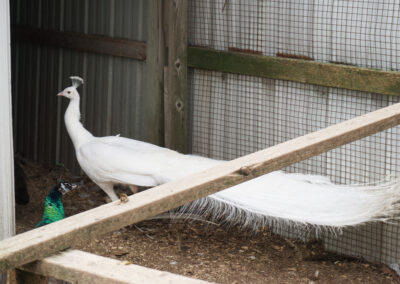 White peacock with a lavish tail. 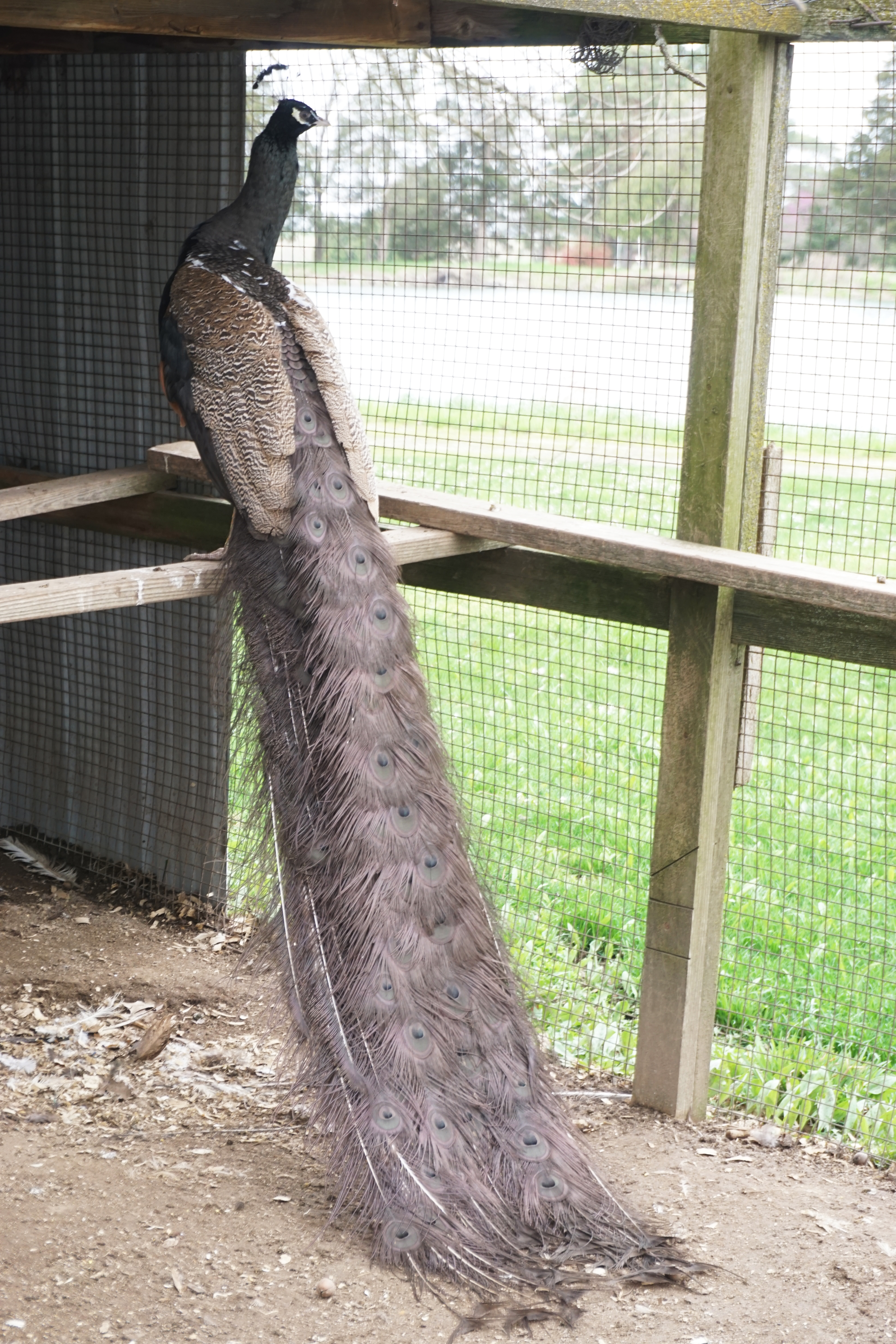 A peacock proud of his tail. 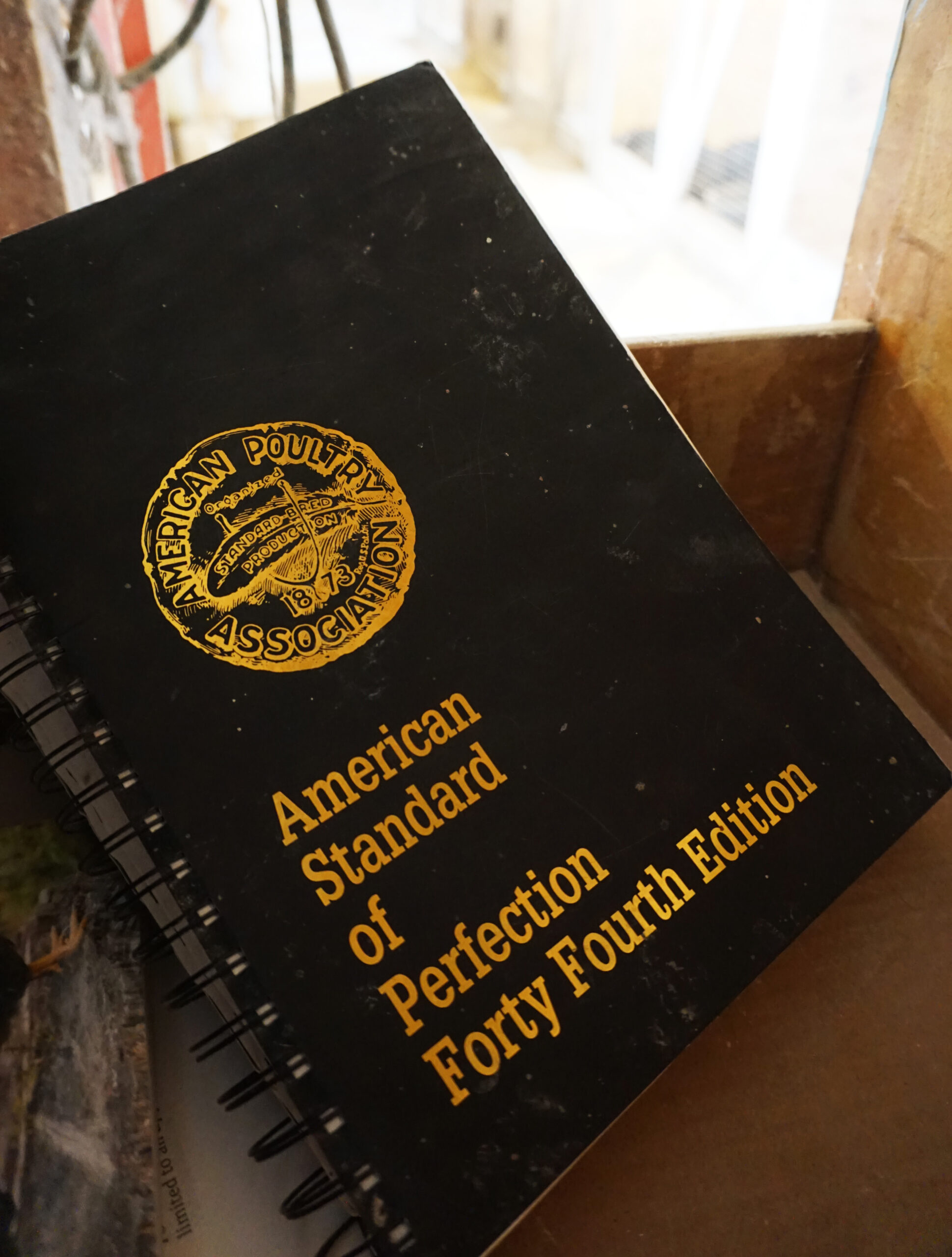 The “book of perfection” in the chicken house.