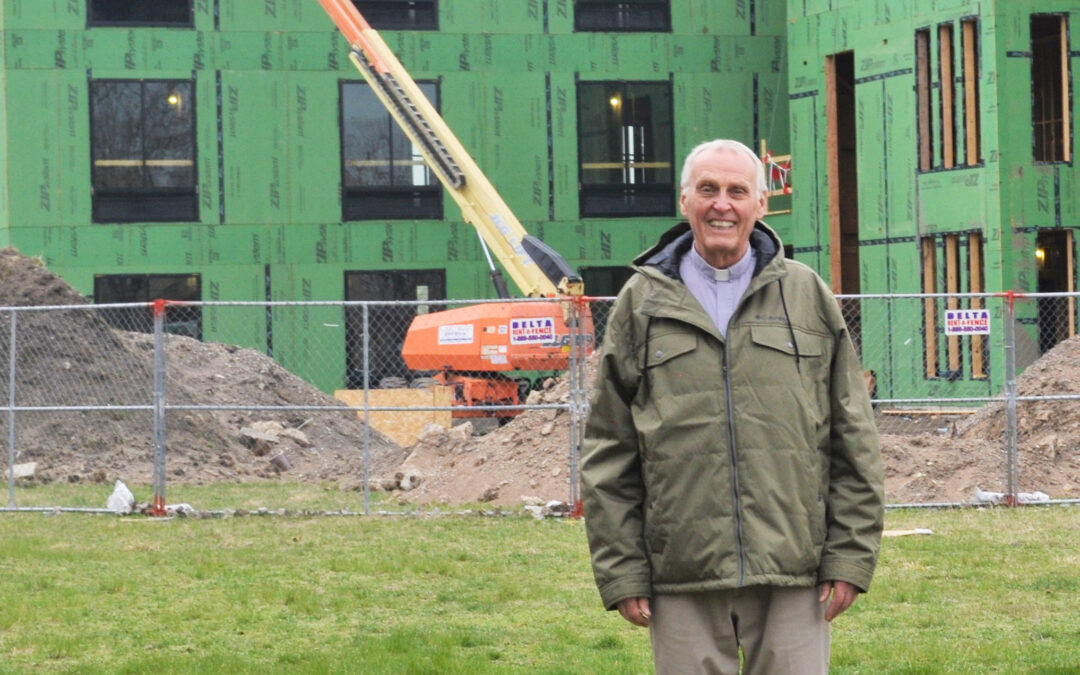 Brother Jim Ballmann, C.PP.S., gets an inspirational lift every weekday when he arrives to work at Calumet College of St. Joseph in Whiting, Ind. He loves to see the progress on the college’s first residence hall, now under construction, which to him looks like three stories of a dream fulfilled. 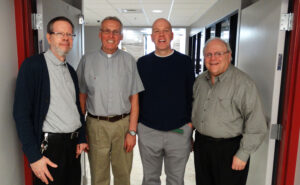 Missionaries who ministered at the little college that could, which celebrated its 70th anniversary last year, always hoped that its campus would include a dormitory. Until recent years, it was strictly a commuter college. Beginning in 2020, CCSJ leased apartments for students at the Illiana Apartments, one mile from campus, and that was exciting—but it wasn’t on campus.

Now the residence hall is under construction on college land, south of its main building. Brother Jim can almost feel the C.PP.S. brothers who served at the college in years past, spiritually looking over his shoulder at the construction site.

“There’s a lot of enthusiasm, especially when we come in and see the progress from the day before,” he said. “I can hardly wait until it’s done and landscaped, integrated into the campus. Brother Gabriel, Brother Gerard—they would have been excited about this.”

The late Brother Gabriel Bridges, C.PP.S., and Brother Gerard Von Hagel, C.PP.S., and in more recent years, Brother Ben Basile, C.PP.S. and Brother Jerry Schwieterman, C.PP.S.—religious brothers have always been mainstays at the college and have participated fully in building it to what it is today.

In good times and bad, in times when it looked like there weren’t going to be any more times—the brothers steadfastly served the mission of CCSJ, to offer an affordable education to students who were often the first in their families to attend college.

Brother Jim arrived at the college on August 2, 1984, assigned to work in the business office. The financial outlook of the college was quite dim at that time, he said. “When I first came, we were operating day-to-day,” he said.

Slowly, slowly, the college fought its way to financial solvency. Brother Jim was part of the rebuilding and refinancing effort. “I worked in finances: accounts payable, accounts receivable, payroll. I was in on all of that because I had a business background,” he said.

Eventually, he also became an instructor in the college’s computer science department. Throughout the years, he has continued to work in the college’s database office, and now is part of the team that must adapt to life on a campus that has a residence hall.

For instance, on-campus housing means the college will need to recruit and train resident assistants for each floor. The residence hall also will require enhanced security efforts.

And: where will those students eat? The college is adding a food service area on the second floor of its 2012 addition, above the Katsahnias Student Commons. The food service area will serve students living in the residence hall, plus other students, faculty and staff.

There will be changes outdoors too. A wooded area to the south of the main building was preserved and will be integrated into new landscaping. Also planned near the residence hall are outdoor recreational spaces, including sand volleyball courts and a practice football field with a walking/running track.

The college family is happily anticipating these developments, which are under the direction of current college president, Dr. Amy McCormack. She is working hard to create partnerships between the college and the surrounding Northwest Indiana community, Brother Jim said.

There has also been a lot of residential construction in the area that once was heavily industrial, Brother Jim said. Some of the homes are being built on or near land that once held a trailer court where C.PP.S. brothers who ministered at the college lived together in community. Did they ever talk over dinner in the shared common trailer about their hopes and dreams for the little college they helped build? Probably, they did.

“This has always been the dream, that the college would build a dorm,” Brother Jim said. “It’s amazing to see it going up—I never expected it to happen.”