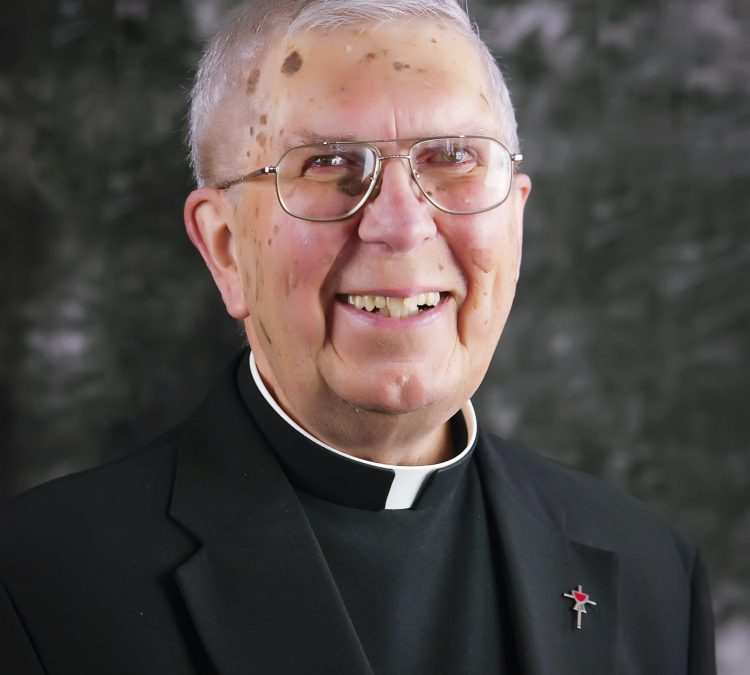 He entered the Congregation in 1948, when he transferred from his junior college to Saint Joseph’s College, Rensselaer, Ind., sponsored by the Missionaries of the Precious Blood. He was ordained on June 2, 1956.

Fr. Dugal served in parishes and in retreat and renewal ministry during his life as a priest.

After his ordination he was in parish ministry in Fort Wayne, then was an instructor at Brunnerdale, the Society’s high school seminary in Canton. In 1965, he was named spiritual director of St. Charles Seminary in Carthagena. From 1969–70, he served as pastor of St. Mary Church in Fort Wayne, Ind.

Fr. Dugal was part of the retreat and renewal team at the Maria Stein Retreat House in Maria Stein, Ohio, from 1970–78. He returned to parish work in 1978 as the pastor of Precious Blood Church in Fort Wayne, where he served until 1982.

Fr. Dugal then returned to retreat and renewal ministry from 1982–1990, when he was named pastor of St. James the Less Church in Columbus. He ministered at that parish and its large school until 1999, when he became pastor of Our Lady of Guadalupe Church in Montezuma, Ohio.

Fr. Dugal also served in leadership with the Congregation as a member of its provincial council for many years. He retired to St. Charles Center in 2011 and ministered in local parishes for many years after that.

He was preceded in death by his brother, Robert, his only sibling.

He is survived by his sister-in-law, Patricia Dugal, of Largo, Fla., and several nieces and nephews, great-nieces and great-nephews.

Fr. Dugal was well-loved wherever he went. Anyone who came into contact with him could sense his innate goodness and his commitment to his vocation. He was genial and compassionate, radiating Christ’s love in a way that was nearly visible. Positive and sociable, he was also a good listener for people who needed his pastoral care.

He was loyal and sincere, capable and conscientious. When he was sent to a new assignment, he said yes even if his heart was not in it—then learned to love the people he served, and the work that was before him. To him, part of being a priest and a Missionary was to go where he was needed. He was grateful for it all, for his family that supported him, for his life with his religious Congregation, for the people he served, and for the God he loved above all else.

Fr. Dugal took joy in his ministry, in his family and friends, and in purely having fun. He loved golf, tennis, swimming and to be outdoors. He followed his favorite sports teams religiously—he was an ardent Notre Dame fan and also rooted for the University of Michigan in the middle of Buckeye country.

Memorial contributions may be made to the Missionaries of the Precious Blood.