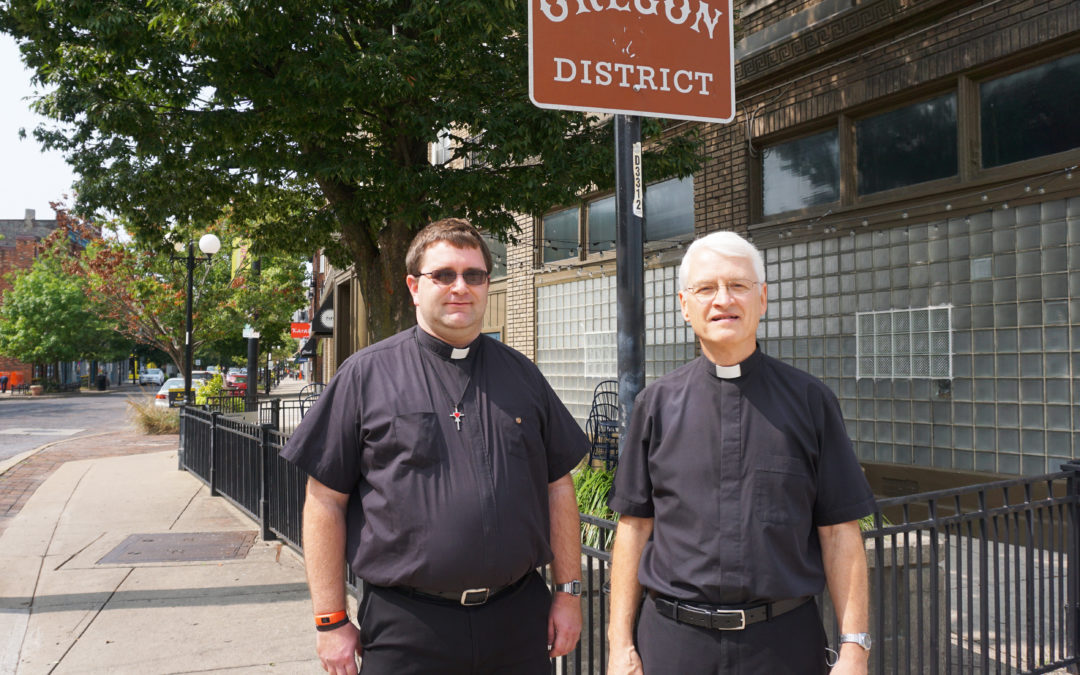 With a cornerstone that was laid on May 17, 1860, Holy Trinity Church in downtown Dayton has seen a lot of human joy and suffering, times of peace and prosperity and times of severe trial.

The church stands a stone’s throw away from Dayton’s historic Oregon District, where on August 4, 2019, Connor Betts opened fire on people who had gathered at the district, which is known for its restaurants and taverns, known as a place to have fun and meet friends. Moments later, 10 people were dead, including Betts, who was shot by police officers responding to the emergency. An additional 27 were injured.

The Oregon District, in that flash of blood and panic, moved into a new identity as a place of tragedy and loss, but also something more: as a neighborhood of survivors who had to move on together.

The people of Holy Trinity were a part of that, said Fr. Angelo Anthony, C.PP.S., the pastor of Dayton’s Downtown Parishes, which include Holy Trinity and nearby St. Joseph and Emmanuel. On August 4, the one-year anniversary, Fr. Anthony presided at a Mass of healing and hope as a way to help the neighborhood see beyond its lingering sadness into the light.

“The Mass offered a message that we stood together as witnesses” to the horrific act of violence that took so many lives and traumatized all who experienced the tragedy, said Fr. Anthony.

But it also presented a path toward peace and healing. “As people of faith, we continue to stand with each other. We don’t run away,” Fr. Anthony said. “Like the women who stood at the foot of the cross, the community of Holy Trinity stands with those who continue to suffer.

“As a church, Holy Trinity has seen so much over the years and it continues to be a pillar, a beacon of light and hope for the community. The church remains strong in the midst of everything that has happened. Our faith gives us the strength to keep going,” he said.

The Mass was part of Holy Trinity’s continuing outreach to the neighborhood. It’s important for the parish, as the Body of Christ, to stand with the people of the Oregon District as friends and neighbors, he said. “During the Mass, we remembered the names of those who had lost their lives in the prayers of petition. We read off their names and also the names of the shooter—his was also a life lost, in more ways than one,” he said. “We also had a candle lit in the sanctuary for each person, 10 candles. We spoke of how the light of Christ continues to guide us through difficult times.”

The parish continues to find ways to make gestures of peace and solidarity to its neighborhood. These don’t have to be complicated, Fr. Anthony said; in fact, they can be as simple as a cookie.

A few weeks after the shooting last year, parishioners volunteered to bake cookies, which were then taken by the dozen to the businesses on Fifth Street, where the shooting had taken place.

“It was a good gesture. It caught some people off guard, to be offered cookies and maybe a hug. It was a way for us to let them know we were praying for them, and for many it was a moment of grace,” Fr. Anthony said. “One store owner took her cookies outside to share with a police officer on a motorcycle. It was nice to see how the blessings were shared in the midst of those tough memories.”

COVID-19 has eliminated the hugs among neighbors, for now. But the cookies and good wishes continue to flow from the parish into the Oregon District. “These days, you can’t go around hugging people in the neighborhood,” Fr. Anthony said. “Our volunteers are wearing masks when they go around to visit people. It’s a different world than it was a year ago—but we still want to be present to our brothers and sisters who are suffering.”

When the parish has a gathering, limited as they are these days, it often orders food from businesses in the Oregon District. “We patronize the businesses around us,” he said. “They are our neighbors and we want to let them know we are supporting them, offering our prayers and a listening ear if they need it.”

In that and many other ways, the people of Holy Trinity hope that Christ’s presence is felt in the neighborhood. “When the community gathers, Christ is present,” Fr. Anthony said. “We’re very aware of that. And we’re always asking, ‘How can we be instruments of Christ’s peace in the world?’”