Just as the United States was beginning to emerge from the Great Depression, Joseph Marling was elected provincial director of the American Province in 1938, the youngest priest ever elected to that position. At the time he was 33 years old and a philosophy professor at Catholic University of America.

Although the Depression had affected the country for eight years, it had been a time of surprising growth for the American Province. Under the careful guidance of Marling’s predecessor, Ignatius Wagner, the province acquired three farms at Saint Joseph’s College, built Brunnerdale minor seminary in Canton, Ohio, and three mission houses in Maryland, Pennsylvania and Virginia. By now the province numbered 266 priests, 74 brothers, 110 major seminarians, and 175 minor seminarians. 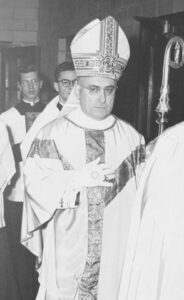 Marling offered strong support for the mission of Saint Joseph’s College. He committed funds to the college, enabling the institution to build four major buildings (Seifert, Noll [now Merlini], and Xavier [now McHale] Halls, and the Alumni Fieldhouse) and meet the standards of the North Central accrediting agency. He also began sending newly ordained priests for graduate study to enlarge and improve the faculty. By 1950, there were 50 priests stationed at the college, up from 33 in 1938.

World War II saw 41 C.PP.S. priests of the American Province serving as military chaplains. One of those chaplains, Fr. Clement Falter, C.PP.S., professor of Spanish and French at the college, lost his life during the invasion of North Africa in 1942. 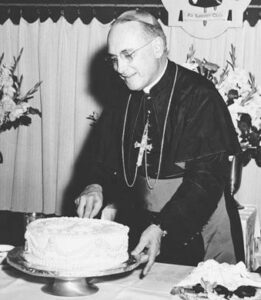 Bishop Marling cuts a cake at a 10th anniversary celebration of his consecration as bishop. (Photo from the Cincinnati Province archives)

The biggest challenge facing Marling was dealing with the Apostolic Visitation of the entire Congregation. The visitation was a response to some problems in the Italian Province, and the Apostolic Visitator dismissed the moderator general and general council, appointing new members to fill those roles. The Congregation was tasked with reviewing the original Rule, approved in 1841, to bring it into conformity with canon law. The American Province prepared a Constitution or Rule and a Customary (a document outlining the practice of the American Province) in 1940. In a meeting with members from the German and Italian Provinces, a new Rule was formulated.

The outbreak of World War II meant that the delegates from the American Province had to leave Italy in haste. The presumption was that this new Rule would be submitted to the Holy See, but instead, the Italians and Germans submitted what amounted to more or less the old Rule of 1841. This rule effectively rejected what the American Province, by now the largest province, was doing. Among other things, it would have forbidden parish ministry, chaplaincies, conducting schools, and the tradition of electing the provincial and
council by universal suffrage.

Nothing could be done during the war, of course, but in 1946 Marling traveled to Rome and, with the assistance of Cardinals Stritch and Mooney, was able to successfully defend the American proposals before the Congregation for Religious. At last Brunner’s innovations—parish work, the promise of fidelity, and financial responsibility to the province—were accepted by the entire Congregation.

After the war, Marling also oversaw shipments of food to Germany and Austria. At that time, religious congregations were invited to send missionaries to Latin America. In response to that request, Marling investigated possibilities in a tour of that continent, and finally selected Chile. The first two Missionaries were sent under his successor, Seraphin Oberhauser.

In 1947, Marling was appointed auxiliary bishop of Kansas City, Mo. In 1956, he was named the founding bishop of the new diocese of Jefferson City, Mo. During his years leading the diocese, he oversaw the construction of a new cathedral, 25 churches, 29 schools, a high school seminary, a Newman Center, and a diocesan newspaper. He did not forget his tour of South America, apparently, and fostered a diocesan outreach to missionary efforts in Perú. At one time, some 10 percent of the clergy of the Jefferson City diocese were serving in those missions.

Marling retired as bishop in 1969 and went on to serve in parish ministry in Christ the King parish in Kansas City until his death in 1979.

Bishop Marling was a brilliant and scholarly man, a man of vision and great energy, whose commitment to higher education and to the foreign missions were among his most important contributions to the American Province. His episcopal motto was Per Sanguinem Crucis (“By the Blood of the Cross”), and his life and ministry reveal a dedication to bringing the message of the Blood of Christ to many in his long and fruitful ministry.

(This biography borrowed extensively from “An Interpretative Essay on the History of the American Province” (1994) by the late Dominic Gerlach, C.PP.S., who served on the faculty of Saint Joseph’s College for many years as professor of German and history.)