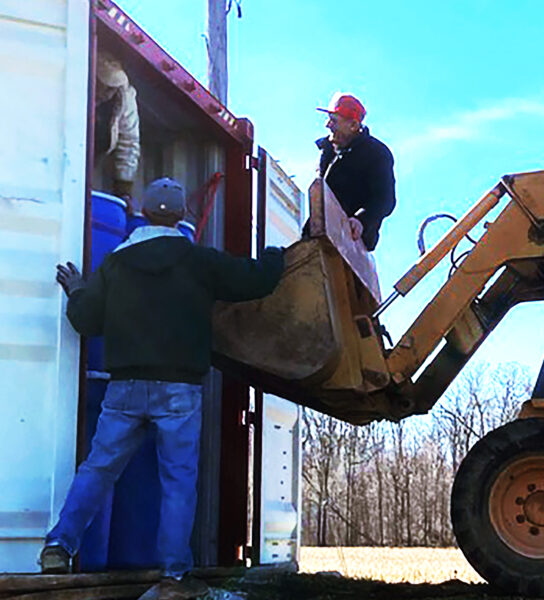 For 20 years, Brother Nick Renner, C.PP.S., has been coordinating shipments of soymeal to Haiti. Two or three times a year, he and a group of volunteers fill 55-gallon food-safe barrels in a barn in rural Burkettsville, Ohio, then load it onto a trailer where goes first to Columbus, then by rail to New York. The protein-rich soymeal is then on its way via container ship then trucks to Jeremie, Haiti, where it is used as a supplement to the diet of malnourished pregnant or nursing mothers.

On a recent cold, clear morning, the crew loaded 130 barrels, or approximately 42,000 pounds of soymeal, bound for the Haitian Health Foundation in Haiti, whose workers distribute it to women in 104 remote villages.

Brother Nick has a group of about 20 volunteers who cheerfully help with the loading. He continues to fine-tune the process so that he “gets the most bang for the buck,” meaning the highest levels of fat and protein in the meal. Meat is too expensive and difficult to ship, he said, but soybean meal works well.

It wasn’t possible to coordinate any shipments last year, during the worst of the pandemic. That was a sorrow to Brother Nick, who plans to make up for it this year. He’s very appreciative of his volunteers, mostly farmers.

“People have been really good about helping,” he said. “I try to choose our work days so they’re in the off-season, so that it doesn’t interfere with farming,” he said. “We’re always overloaded with people who want to help.”