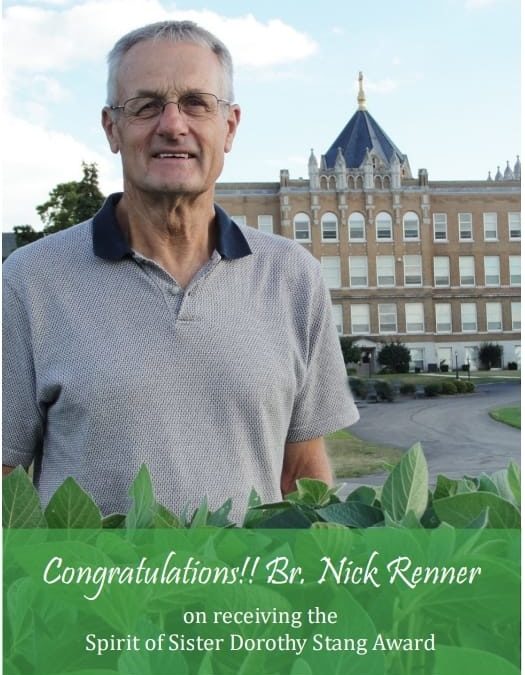 Brother Nick Renner, C.PP.S., has received the Spirit of Sr. Dorothy Stang Award from the Archdiocese of Cincinnati for a lifetime of ministry in serving the poor and protecting the Earth—ministry that he continues to carry out every day.

The award was presented during a Mass on October 19 at St. Henry Parish in St. Henry, Ohio, where Brother Nick is in ministry. Sr. Dorothy Stang, SND, was killed in 2005 in the Brazilian Amazon as she fought for the rights of indigenous people there.

An application put forward by friends of Brother Nick describes him as “gifted at interacting in multiple venues, sharing in down-to-earth terms the practical living-out of Catholic social teaching.”

Fr. William O’Donnell, C.PP.S., the pastor of the St. Henry cluster of parishes, added that “Brother Nick has served St Charles Center in Carthagena and our deanery for his entire life as a religious brother and Missionary of the Precious Blood,” Fr. O’Donnell said. “Nick is known for his hard work, wisdom and prayerfulness. He has more friends than one can count and he is highly respected as a member of our local community. He is an inspiration to the farming community and by his willingness to reach out to the marginalized in developing countries. No one is more worthy, in my opinion, to receive this recognition than Brother Nick, who lives and serves in the spirit of Sister Dorothy Stang. “

Brother Nick is usually up before dawn. He fuels up at breakfast at St. Charles Center, where he makes his home; then goes out to pray the rosary, attend to Mass and spend an hour in adoration at one of the parishes in the St. Henry cluster. Only then does he set out on his day’s work.

“God is everywhere, but the devil is out there too, and you really need padding (of prayer) or the devil attacks,” he said. Brother Nick with Becky Kunkler of the Archdiocese of Cincinnati and Fr. Bill O’Donnell, pastor of the St. Henry Cluster.

From there, his days are as varied as the needs of the people he serves. He seeks out those who need his help or encouragement—or they seek him out. He bolsters people’s spirits with Bible studies or home visits. He also collaborates with the farmers who work the C.PP.S.-owned farmland around St. Charles to ensure that the best soil conservation practices are in place.

In addition to his ministry with the local church, Brother Nick’s efforts over the years have reached far and wide. With the help of many volunteers, he has organized a program that sends high-protein soybean meal to Haiti as a dietary supplement. It has fed an estimated 10,000 people so far, mostly mothers and their young children.

He has also made mission trips to Jamaica and has been active in Guatemala, where he built a basketball court and recreation area for a school in the La Labor region; founded two schools that teach agricultural methods; and was instrumental in the founding of Cooperative for Education, a thriving nonprofit that distributes textbooks to schools in the countryside.

Those are just a few of his initiatives, projects that God directs and funds. “I never ask for money (to fund these projects), but the money comes,” he said.

“God gave Brother Nick these gifts and he’s using them,” said Becky Kunkler, the northern area coordinator of the Archdiocese of Cincinnati’s Catholic Social Action Office. “That’s the best way to thank God—to use your talents and answer God’s call.”