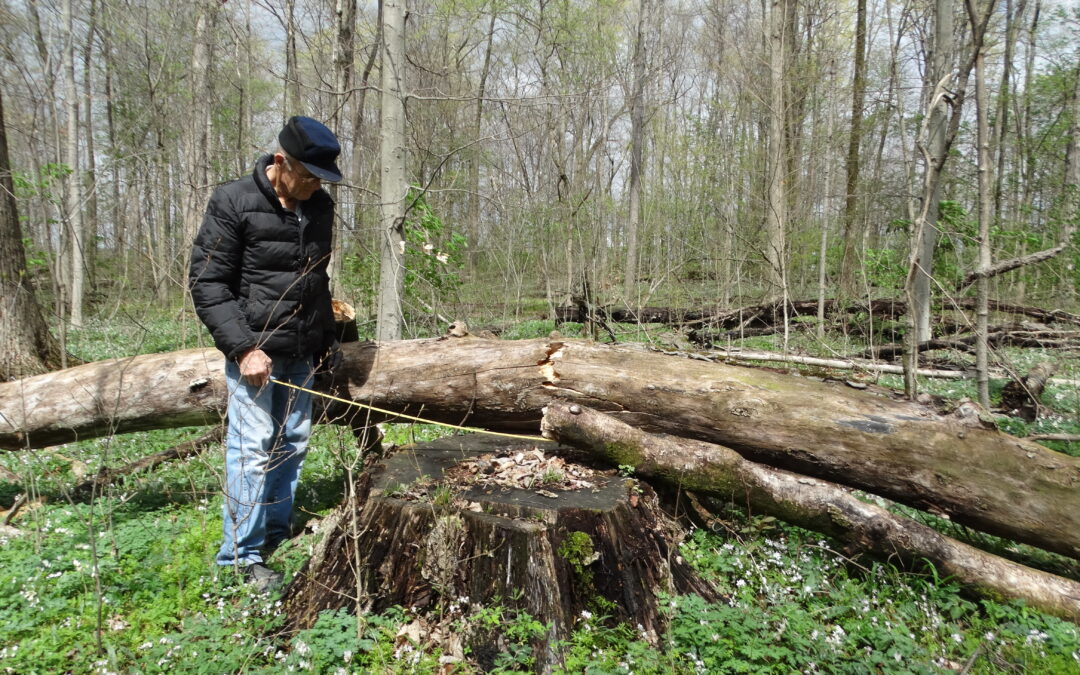 The woods are lovely, dark and deep. And Br. Nick Renner, C.PP.S., wants to keep it that way.

Br. Nick has filed paperwork to enter 66 acres of woods and an adjoining 13 acres of farmland that the Community owns into a nature conservancy that will preserve it far into the future. The woods and farmland are within view of St. Charles Center in Carthagena, Ohio.

The property was originally purchased in 1870 by Fr. Joseph Dwenger, C.PP.S., then St. Charles Seminary rector who later became bishop of Fort Wayne.

“You never know—any law can be changed—but this agreement is intended to be forever,” Br. Nick said. He is proposing the property be entered into the West Central Ohio Land Conservancy, a nonprofit organization that works with the federal government to preserve woods and cropland. The Community will continue to own the acreage, but if it is sold at any time in the future, the woods and farmland will still be protected by the agreement.

If the acreage is admitted into the conservancy, no houses or buildings or development will be allowed on it.

Br. Nick, who admits he does not usually enjoy paperwork, sweated through pages of the application. But it will be worth it if the woods will be preserved.

“I had to do a lot of research,” Br. Nick said, beginning with obtaining the original deed from the Mercer County recorder’s office, signed by Fr. Dwenger himself. “It took a couple of months to get the application ready, and a lot of homework. The application has been submitted, but it could take five or six months to hear back.” Last fall, he received the go-ahead from the provincial council to pursue the application process.

On a recent April afternoon, Br. Nick walked through the woods pointing out strong and healthy trees. He measured the stump of an old oak to see if it might have been standing when Fr. Dwenger bought the property. The stump was four feet across, and yielded a 40-foot log that was hauled out in two sections.

Br. Nick uses the woods as a source of trees to adorn the grounds at St. Charles. He estimates that 80-100 saplings from the woods have been replanted at St. Charles in recent years.

It’s likely that they are not the first trees to travel from the woods to St. Charles; Br. Nick believes but can’t prove that timbers from the woods were used in the construction of St. Charles’ Assumption Chapel.

Some Community members wander through the woods, but there are no trails and few signs of human life there, which is how Br. Nick likes it. Somehow trash in a woods attracts more trash. He spends about a week each year working around the parameter of the woods, trimming branches that get in the way of farming, keeping the woods from edging toward neighboring property.

Br. Nick knows all the neighbors around the woods, and as he walks around its edges, he tells stories about families going back generations. Also about the woods themselves, how early settlers in the area encountered woods just like these and had to clear them to create farmland. How Br. Oliver Weaver, C.PP.S., planted a few pine trees in the woods, pointing out the ones that remain. How he still works with a chain saw owned by the late Br. Don Fisher, C.PP.S., who worked the St. Charles farmland with him for many years.

In fact, Br. Nick said, he and Br. Don talked long ago about conserving the woods, not just this woods but all the Community-owned woodland. “Don and Jude (Br. Jude Brown, C.PP.S.) and I had this idea over 60 years ago, that we would always keep our woods. We talked about it around the table: agreed? Agreed,” he said. “We didn’t know why back then, but we knew that somehow Mother Nature needs a balance. And so we never took any woods down for 60 years.”