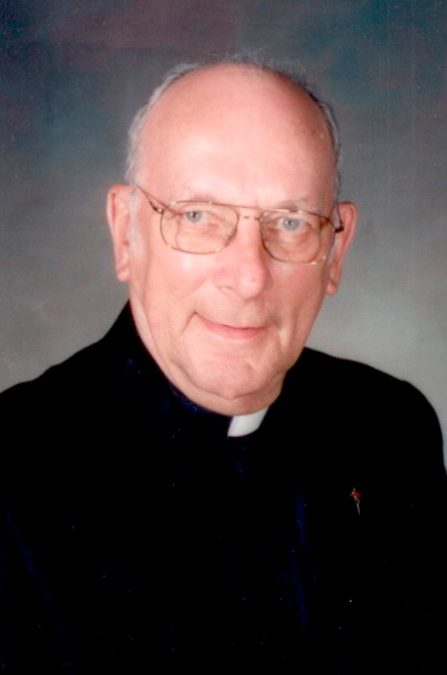 After his ordination, Fr. Schiml first entered parish ministry, serving at St. Anthony Church in Detroit; St. John the Baptist in Whiting, Ind., from 1957-62; and Holy Angels in Dayton from 1962-66. Beginning in 1966, he was instrumental in the founding of a college that is sponsored by the Community, Calumet College of St. Joseph in Whiting, Ind. He served at the college for over 20 years, as its director of development and later as the college president and longtime member of the board of trustees.

In 1989, he became pastor of Precious Blood Church in Dayton, Ohio, and also served briefly at Our Lady of Good Counsel in Cleveland. From 1993 to 2013, he served as pastor of St. Joseph Church in Pulaski (Star City), Ind. In July 2013, he retired to St. Charles Center.

He was preceded in death by his brother, Terence Schiml, Jr.

“Truly, he was a shepherd to us, a caring and compassionate pastor,” said Bill Roth, a parishioner at St. Joseph Church and a good friend of Fr. Schiml. “He knew every individual in the parish and cared about everyone.”

Fr. Schiml loved working with wood, and put his skills to good use in the parish, Mr. Roth added. “He was very much a hands-on minister. Our parish didn’t have a ramp, and Fr. Schiml built the ramp so that the church would be more accessible. It was a big project, because the ramp was probably 60 feet long. He also built a wooden deck on the back of the rectory, and put a ramp on the back of it so that people with handicaps would feel welcome there.”

Fr. Schiml performed many acts of kindness “for so many people in our community, whether they were Catholic or not,” Mr. Roth said. “Those who were not members of our church loved and respected him just as much as we did. He lived his faith.”

A Mass of Christian burial was celebrated on Thursday, May 28, 2015, at 2 p.m. at St. Charles with Fr. Larry Hemmelgarn, C.PP.S., presiding. Burial followed in the Community cemetery.