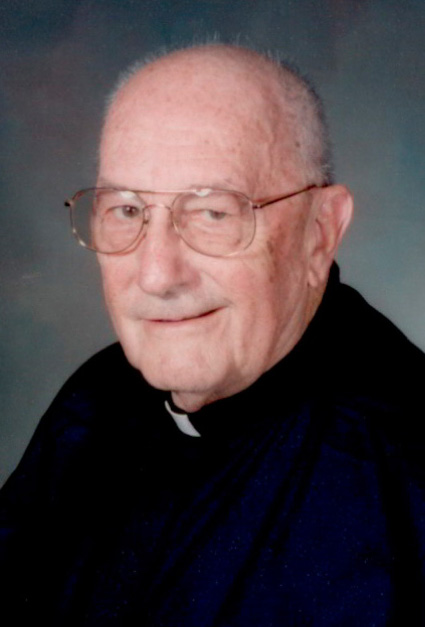 He was born on February 2, 1922, in Peru, Ohio, to George and Bertha (Schlachter) Adelman. After serving in the U.S. Navy during World War II, he entered the Society in 1947 at Saint Joseph’s College in Rensselaer, Ind., and was ordained on June 2, 1956, at St. Charles.

In 1966, he was named procurator (treasurer) at Brunnerdale, the Congregation’s high school seminary in Canton, Ohio. Fr. Adelman was appointed director of the Sorrowful Mother Shrine in Bellevue, Ohio, in 1972, and at the same time also served as pastor of St. Michael Church in Marywood, Ohio.

In 1978, Fr. Adelman was elected provincial director of the Cincinnati Province. He also served in the province’s senate. He returned to parish ministry in 1983, first at Good Shepherd Church in Frankfort, Ky.; then at St. Michael in Kalida, Ohio.

In 1987, he returned to the Sorrowful Mother Shrine as its director, and stayed there until 1994, when he was named associate pastor of the Church of the Nativity in Lake Mary, Fla.

He is survived by two sisters, Arlene Austin of Westlake, Ohio; and Evelyn Ruffing, Monroeville, Ohio; a brother-in-law, James Meyer, Monroeville; and numerous nieces and nephews, great-nieces and great-nephews.

He was preceded in death by his brother and sister-in-law, Alvin and Ruth Adelman; and brothers-in-law Eugene Austin, Jerrold Henery and Francis Ruffing.

Fr. Adelman was a natural leader who was often entrusted with leadership positions within the Community, said his friend and classmate, Fr. James Dugal, C.PP.S. “He had a real concern for people,” Fr. Dugal added. “He always made friends wherever he served.”

A Mass of Christian burial was celebrated at 2 p.m. on Friday, April 8, 2016, at St. Charles Center, with Fr. Larry Hemmelgarn, C.PP.S., presiding. Fr. Ken Schnipke, C.PP.S., was the homilist. Burial followed in the Community cemetery.

Memorial contributions may be made to the Missionaries of the Precious Blood, Cincinnati Province.