A Regular Saint for Regular People 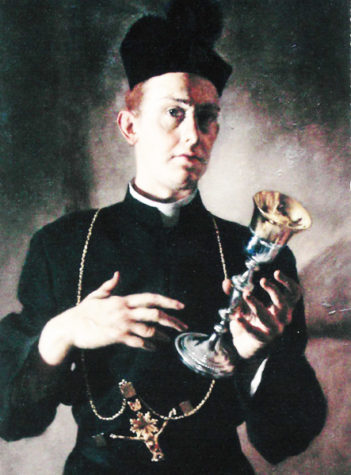 Venerable John Merlini (1795–1873), the third moderator general of the Missionaries of the Precious Blood, has taken one step closer to canonization as the Archdiocese of Naples, Italy, investigates a possible miracle that was performed through his intercession.

“Merlini was a very versatile person,” said Fr. Emanuele Lupi, C.PP.S., an Italian priest who currently serves in Rome as the vice moderator general of the Missionaries of the Precious Blood worldwide and as the Congregation’s archivist. “He was an artist and an architect. He was a man of God. He was a person who knew when to stop and reflect. He had a very calm personality. Nowadays, Pope Francis talks a lot about discernment. Merlini was a man of discernment. He was a spiritual director for many people, including St. Maria de Mattias,” who founded the Adorers of the Blood of Christ, a congregation of sisters who now serve around the world.

Merlini was ordained a diocesan priest on December 19, 1818. He was 25 years old in 1820 when he met St. Gaspar del Bufalo, the founder of the Missionaries of the Precious Blood during a retreat that Gaspar was leading in the Abbey of San Felice, the Missionaries’ first mission house in Giano, Italy. Though he had been ordained a diocesan priest, Merlini was inspired by Gaspar and knew right away that he wanted to take part in St. Gaspar’s mission to renew the Church through the Precious Blood of Jesus.

A Man of Wisdom

Merlini brought a lot of gifts to the new Congregation of priests and brothers, said Fr. Lupi. St. Gaspar was a passionate, visionary preacher and Merlini was a planner and a designer, someone who could carry out the dreams that St. Gaspar had for the Missionaries. Those who have studied the life of St. Gaspar have marveled at all that he was able to accomplish—but “if Gaspar was able to do it all, it was because of Merlini,” Fr. Lupi said.

Gaspar spent much of his life preaching missions in the Italian countryside, traveling from town to town. “Merlini lived in a C.PP.S. house his entire life. He was the one who was primarily running the Congregation while St. Gaspar was going out and preaching,” Fr. Lupi said.

Merlini was compassionate and loyal—after Gaspar’s death in 1837, everyone expected Merlini to be elected as his successor, but he was not. It had to be humiliating for Merlini, but he continued to serve the Congregation humbly and well, working hard and never complaining. “In humble silence he continued on, trying to be faithful to the message of St. Gaspar,” said Fr. Lupi. “That is another sign of his holiness. Not everyone would have been able to accept that.”

Ten years later, Merlini was chosen as the third moderator general and held that position for nearly 30 years, longer than anyone else in the history of the Congregation.

Merlini was the spiritual director of Fr. Francis de Sales Brunner, C.PP.S., who brought the first Missionaries to the United States in 1843. As they established themselves in mission houses and parishes across central and western Ohio, Merlini encouraged and guided Fr. Brunner. Under his leadership, the Missionaries’ ministries stretched far beyond their home country of Italy.

“The secret of the holiness of Merlini is exactly that he was a regular person. Sometimes when we read the lives of the saints, we see that they performed many miracles during their lifetime. That’s not true with Merlini,” Fr. Lupi said. “What he can teach us that it is possible to be saints, it is possible to be holy, in regular daily life. We can make extraordinary all the ordinary things that we do every day.

“The holiness of Merlini consists mainly in the commitments that he made. This tells me that I can be holy if I am faithful to what I have to do. His holiness comes from trying to do his level best in order to serve God. He didn’t heal any paralytic. He didn’t make any blind person see. But day after day, he was constant and faithful to God. He’s a regular saint for regular people, and he can teach us that if we are faithful and do what we are supposed to do, we can be saints.”

Merlini, who was recognized as venerable in 1973, can be a saint if his cause goes forward. Working with Sr. Nicla Spezzati, ASC, who is the postulator (a person who presents a case for the canonization or beatification), Fr. Lupi is promoting his cause.

It’s hard to say what Merlini himself would think of all this. He might be a little embarrassed by all the attention, said Fr. Lupi. “From what I understand of him, he was such a humble man. He worked hard and he kept a low profile. He didn’t like to be in the limelight,” he said. “But of course, a person would have to be happy about being canonized.”