St. Gaspar and the Peacemakers 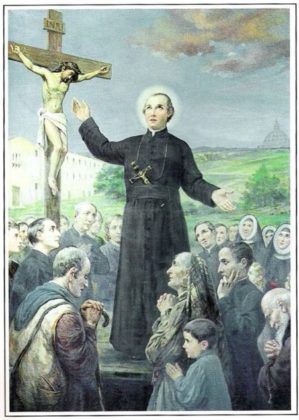 One of the more prominent and memorable chapters in the life of St. Gaspar del Bufalo, founder of the Missionaries of the Precious Blood, is his ministry with the brigands in the Papal States south of Rome. Gaspar and his Missionaries took a bold and courageous step in order to bring peace to a very troubled area. It remains a powerful example of Gaspar’s ministry of reconciliation motivated by the power of the Blood of Jesus.

Gaspar’s concern for reconciliation and peacemaking was not confined to this dramatic period of his life, however. The missions he and other Missionaries conducted also emphasized reconciliation, as recorded by Biagio Valentini, Gaspar’s spiritual director for more than 15 years and Gaspar’s successor as superior of the Congregation, and the Venerable John Merlini, his friend and the third moderator general of the C.PP.S.

Not long after Gaspar’s death, both of them were invited to give testimony in the canonical process for the beatification and canonization of Gaspar. Their testimony is an invaluable source for much of what we know of our founder’s life and work.

Merlini notes that a feature of the mission was reconciliation and establishing peace. . . . Gaspar, always concerned that the fruits of the mission would endure, would choose peacemakers from among those making the mission to continue the work of reconciliation that had begun during that spiritual exercise. I have not found a description of the process for selecting the peacemakers, but Gaspar may well have consulted the clergy and lay people of the place in making his choice. Gaspar was also known to be perceptive of the gifts of others and rather forceful in inviting them to use these gifts in ministry.

I have regrettably not found any more details about how these peacemakers were to carry out the ministry of reconciliation. Gaspar and the other Missionaries did, of course, establish associations or sodalities of the laity and clergy in order that the good work begun in the missions might continue to be fruitful.

Another significant feature of the mission that took place on the final day was the “sermon of reminders.” Prior to the sermon, the people were asked to bring “all evil books that were to be burned, also playing cards and other dangerous articles, including forbidden weapons” and to surrender them to the Missionaries. The books and cards would be burned and the weapons smashed to bits, with the metal then sold and “the money used to buy wax for candles or something else in honor of the most holy Mary.” It seems that Gaspar anticipated contemporary gun turn-in programs nearly 200 years ago!

Merlini and Valentini describe a number of occasions in which public and dramatic reconciliations took place during missions conducted by our founder. . . It is clear that reconciliation was a very important element in Gaspar’s ministry. Not only did he encourage and invite people to be reconciled during the mission, but he also provided a means of continuing the ministry of reconciliation.

We Missionaries of the Precious Blood have been sharpening our focus on reconciliation as a core element of our congregational charism. Certainly Gaspar must be pleased that we are, in a sense, rediscovering a dimension of ministry that was of such great importance to him.