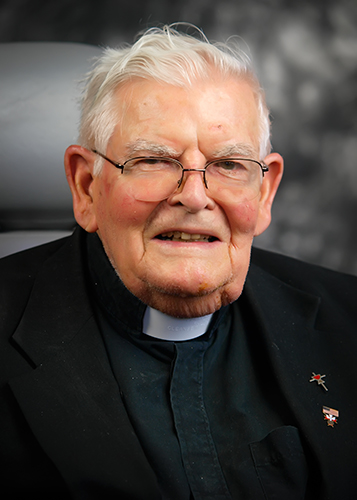 Fr. Kunisch was born in Toledo on August 19, 1930, to Alfred and Helen (McCann) Kunisch. He entered the Missionaries of the Precious Blood in 1944 in Brunnerdale, a high school seminary near Canton, Ohio, and was ordained on June 2, 1956.

After his ordination he served briefly in parish ministry in Detroit before he was assigned to St. Charles Seminary in Carthagena, Ohio, where in 1960 he was named treasurer, later vice-superior. In 1974, he was appointed provincial secretary.

Fr. Kunisch served at Calumet College of St. Joseph from 1975-81. He then became the pastor of St. Aloysius Church in Carthagena, Ohio, as well as the business manager of Messenger Press in Carthagena, which at the time was owned by the Missionaries. In 1985, he was named pastor of Our Lady of Guadalupe Church in Montezuma, Ohio. In those years he also continued to serve in the leadership of the Congregation.

Fr. Kunisch became the director of the Sorrowful Mother Shrine, Bellevue, Ohio, in 1992. He retired from that position in 2000, but continued to minister at the shrine. In 2012, he retired to St. Charles Center, where he helped with parish ministry in the area as long as he was able. Even as his health declined, his mind remained sharp and clear, and he retained his lifelong ability with numbers; Fr. Kunisch served on the province’s finance committee until his death.

Fr. Kunisch knew from a young age that he wanted to be a priest. He answered God’s call and remained faithful to that call for over six decades. The life of a Missionary of the Precious Blood “is about service to God,” he once said. “Doing God’s work, wherever God might send you. It’s been a good life a very interesting life. You can’t get anything more interesting than to see the devotion of the people to God and the Blessed Mother.”

He is survived by a sister, Alice (Joe) Westrick, of Sacramento, Calif.; and numerous nieces and nephews, great-nieces and great-nephews.

He was preceded in death by two brothers and their wives, William and Rita, and Raymond and Virginia; and a sister and her husband, Eileen and Al Couturier.