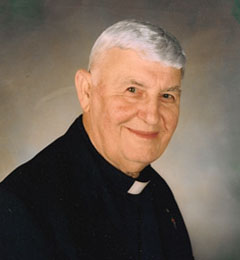 He entered the Society at Brunnerdale, the Missionaries’ minor seminary near Canton, Ohio, in 1942, and was ordained on September 18, 1954.

From 1988–1989, Fr. Miller served at St. Ann Church in Warsaw, Mo. He was named pro-tem administrator for Mary Help of Christians in Fort Recovery, Ohio, in 1989, and later that year was named pastor of Sts. Peter and Paul Church in Ottawa, Ohio.

In 1996, Fr. Miller retired to St. Charles Center, where he spent much of his time and energy helping out at area parishes for many years.

Fr. Miller lived his life enthusiastically and his faith boldly. He gave of himself freely, driving his big red Ford van that he had emblazoned with “Missionaries of the Precious Blood.” Cheerful and friendly, he was firm in his faith; one never had to wonder where he stood.

Fr. Miller was an avid outdoorsman and sportsman and loved to cook and share game and fish with family, friends and parishioners.

Due to health restrictions, a Mass of Christian Burial was celebrated privately on Monday, April 6 at St. Charles Center, with Fr. Jeffrey Kirch, C.PP.S., provincial director, presiding. Fr. James Seibert, C.PP.S., was the homilist. Burial followed in the Community cemetery.