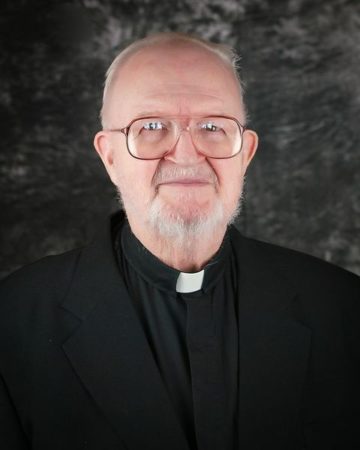 He was born on July 13, 1928 in Randolph, Ohio, to Richard and Agnes (DeChant) Lang. He entered the Missionaries of the Precious Blood in 1942 at Brunnerdale, the Missionaries’ former minor seminary near Canton, Ohio and was ordained on May 15, 1954.

After his ordination, Fr. Lang served at St. Charles Seminary before being assigned as assistant pastor to St. Anthony Parish in Detroit. From 1955-1960, he served at St. Mary Parish in Garden City, Kan. He then ministered briefly at St. Boniface Church in Piqua, Ohio, before pursuing graduate studies. He earned a master’s degree at the University of Michigan and a doctorate from the American University in Rome.

In 1985, Fr. Lang was appointed pastor of Our Lady of the Pines Parish in Black Forest, Colorado Springs, Colo. For many years he also served as an auxiliary chaplain at the U.S. Air Force Academy in Colorado Springs.

He is survived by his brother, Herbert Lang, North Canton, Ohio; numerous nieces and nephews, great-nieces and great-nephews.

He was preceded in death by his siblings and their spouses, Evelyn (Wendell) Burgess; Louise (Bob) Spencer; and Joanne (Ray) Horning; and in-laws Johnny Walters, Ruth Lang and Kate Lang.

Fr. Lang lived a fascinating life, said his nephew, John Lang. He was a scholar with a gift for languages, but also was adventuresome. At St. Mary in Garden City, Kan., he met famed aerobatics pilot Harold Krier, who taught him to fly and instilled in him a love for aviation that lasted throughout his life. He traveled with the U.S. aerobatics team and served as the team’s interpreter through its European tours. He also had a great love for the outdoors and enjoyed camping and fishing.

Most of all, he enjoyed his life as a priest. “Everyone who knew him liked him,” John Lang said. “He was ebullient—he truly seemed to be a happy person. And he brought that happiness to those around him. Or maybe I should say joy.”

Due to health restrictions, a Mass of Christian Burial was celebrated privately on Friday, June 12 at St. Charles Center, with Fr. Jeffrey Kirch, C.PP.S., provincial director, presiding. Fr. Ken Schroeder, C.PP.S., was the homilist. Burial followed in the Community cemetery.